Japanese and Chinese Books, Manuscripts, and Scrolls from Jonathan A. Hill Bookseller 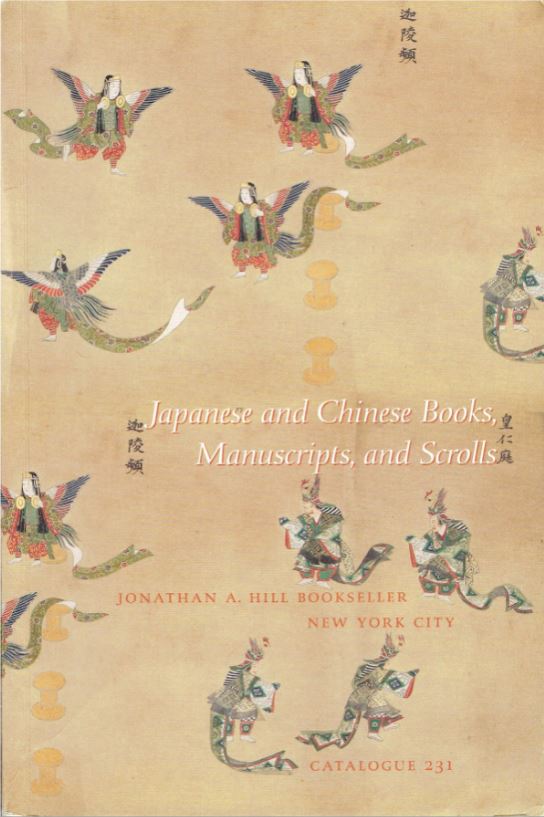 Jonathan A. Hill Bookseller has issued their Catalogue 231, Japanese and Chinese Books, Manuscripts, and Scrolls. Most of what you will find here is antiquarian material, just a few items from the twentieth century. There are books, scrolls, illustrations and artwork, and a few ephemeral items. The majority are from Japan. Most items precede the Japanese opening to the West in the 1850s, although some pertain to that period when America forced Japan to open its doors to trade. These are a few examples of the material you will find in this collection.

We start with one of the scrolls. This one is over 23 feet long. It is a color illustrated view of the copper smelting procedure from the Ani-kozan mine in Akita prefecture of northern Japan. Silver and copper were discovered there in the late 16th century and have been mined ever since. The translated title at the beginning reads The Process of Refining Metals from the Mine. The artist was Suisan Hirafuku. Suisan Hirafuku was a noted artist of the 19th century. He and his son, painter Hyakusai Hirafuku, are honored in a museum of their paintings in Akita. This scroll dates to around 1875. The scroll begins at the mouth of the mine with men and women breaking up the ore with hammers. It is then carried on their backs for washing and processing, then to be melted in large furnaces. Next it is cooled and cleaned in water, weighed, pulled by oxen to a village on the Ani River, and transported to a smelting facility for further refinement where the silver is separated from the copper. The mining was the first business of the Sumitomo family, eventually evolving into the myriad businesses of today's Sumitomo Group. Item 9. Priced at $12,500.

Here is another scroll, two actually. Its translated title is Kyoto, The Capital City of Flowers: A Panorama. Each is about 19 feet long and dates from the mid-Edo period (1603-1868). They contain painted scenes of temples, shrines and monuments from Kyoto and numerous scenic locations in the area surrounding the city. They have been painted in color and highlighted in gold. Item 29. $7,500.

This next book is magical. The title is Tezuma Hayadenju (How to Learn Magic Tricks Quickly). The author is Ichumaru Jipposha, and while the preface is dated 1825, Hill thinks it was published in 1849 as that is when the author was active. This book describes 35 tricks and how they work, with clever illustrations included. Among the tricks you will learn how to do, Hill explains, are “how to have a raccoon deliver sake, shadow tricks and illusions, making instant ice, creating a bright light at night in order to spot money on the pavement, lifting many heavy coins with a thin piece of paper, 'cutting' sake into two pieces, attaching a tea cup on a pillar, catching fire flies, shadow play, making ghosts appear, water tricks, making the sounds of thunder, various optical illusions, pebbles flying around the room, writing words on the surface of the water, moving eggs, and floating coins on water.” Item 19. $2,250.

This is an amazing work, a manuscript cartographic book headed Kaiji zu (Nautical Charts). Text at the beginning says the creator spent five years creating the charts. Its creator was Tsugihei Miyachi, a sea pilot in the Saga Prefecture. The charts are of the Inland Sea, between between Saga in the west and Osaka in the east. The Inland Sea connects the Pacific Ocean to the Sea of Japan, wandering between Japan's major islands. It is 250 miles long and contains over 3,000 islands. It can be treacherous to navigate. In addition to the islands there are rocky outcroppings and areas of turbulence. The manuscript contains two pages of preliminary text, 11 pages of of textual content, and 27 finely colored double-page maps, bound in consecutive order. If the maps were unbound, it would stretch 37 feet long. Considering the size of this map, it is surprising to learn from the author that three copies were made, one for the local fiefdom lord and the other two for government officials. This is one of those three. Item 56. $65,000.

Item 2 is an early manuscript relating to acupuncture. It is titled Inyo Shindensho (Yin and Yang of Acupuncture Treatment, passed on). A notation says it was “copied in 1569 by Ogawa and presented to Kai.” It begins with the yin and yang of acupuncture and use of the needles. It then focuses on intestinal worms and the use of acupuncture and herbal medicines to treat them. There are drawings of various parasitical worms and where in the body they can be found. The instructions call for the chilling of the needles, and explains where and how deep they need to be inserted. I'm not sure this would work to get rid of worms unless the trick was to stab them with the needles. I don't know whether this was meant to be a pun, but Hill informs us there is “some worming touching the characters and images.” $2,950.