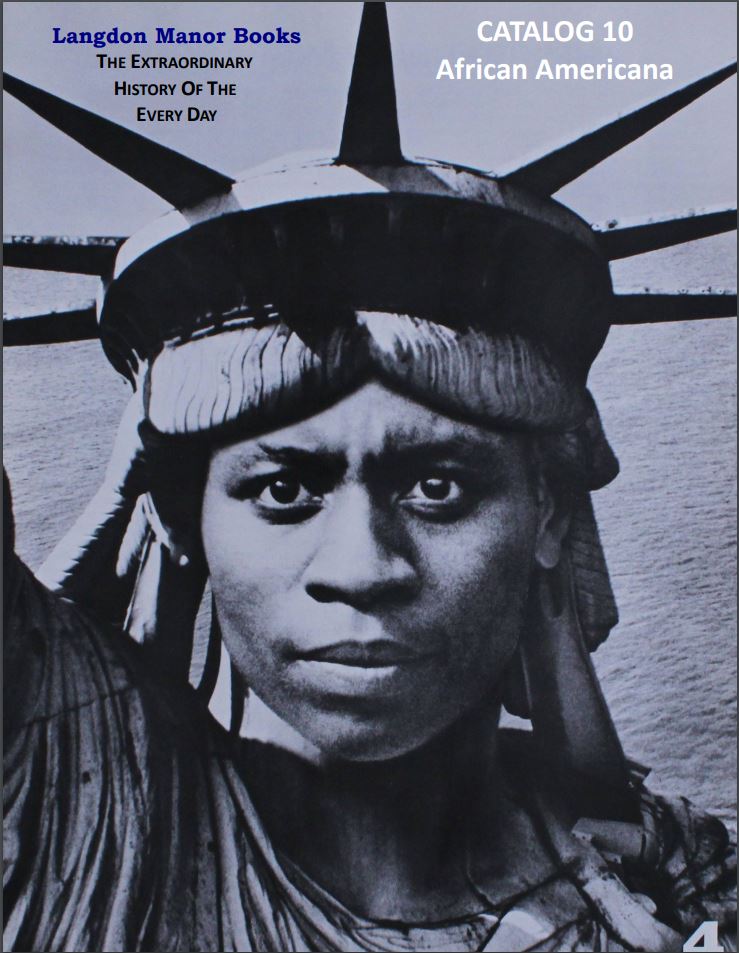 Langdon Manor Books has published their Catalog 10, featuring African Americana. This catalogue does not contain works by Martin Luther King, or W. E. B. Dubois. There is one from Frederick Douglass, but bizarrely, it's a first edition in Swedish. Mostly what you see here falls into two categories. There are items and archives from ordinary African Americans, or occasionally Whites involved with the Black community, and people who were important in their time, but largely forgotten today. For example, there is the novel pertaining to slavery published a couple of months before Uncle Tom's Cabin which did not quite reach the public with the same intensity, or there is the archive from the DJ who became influential in the development of rap music. Those with an interest in African-Americana will find much to collect here.

This is an example of a civil rights figure whose name has been practically forgotten. Ferdinand D. Lee had a dream of creating a monument to honor Black soldiers and sailors who fought for the Union during the Civil War. Their contributions toward preserving the Union were given little notice. A civil service worker, Lee founded the National Memorial Association in 1916 to persuade the federal government to fund such a project. That year, Lee typed and signed this letter to Secretary of the Navy Josephus Daniels. Lee writes that “no one can question the record of the Colored Soldiers and Sailors and we believe their heroic deeds should be immortalized in statues and monuments as are those of other races.” It is unlikely this letter had much impact as Daniels was a southerner who supported the KKK and considered Black suffrage to be a “folly and a crime.” Nonetheless, Lee was persistent. In 1929, he finally convinced Congress to support a more expansive project, including a museum and library recognizing the contributions of African Americans in many fields. That support was contingent upon the NMA raising $500,000. Unfortunately, the Depression intervened and Lee died in 1933. The commission to advance the project was disbanded. However, Lee's dream would finally be realized many years after he died with the opening of the National Museum of African American History and Culture, part of the Smithsonian, in 2016. Item 7. Priced at $850.

Here is one of those “lost” accounts of slavery. The title is Sunshine and Shadow of Slave Life. Reminiscences of as Told by Isaac D. Williams to “Tege,” published in 1885. “Tege” was William Ferguson Goldie, and Williams had to tell his tale rather than write it as, growing up a slave, he was never taught to read and write. “Uncle Ike” was a tall, strong man, and thus his services were valuable, leading to his often being leased out. However, that did not lead to much appreciation, and his desire to escape brought about much mistreatment. He recounts much about slave life, its high and low points, at one point recounting, “they always had us whipped over the bare skin, for our clothing would otherwise be torn. My master often had me take the clothing off the female slaves, and then he would stand behind me with his whip, and if I did not strike them hard enough, he would strike me until I did.” Slave reality differed from the image of beneficent masters the South regularly promoted. Eventually, Williams escaped, and tells about his journey along the Underground Railroad to freedom in Canada. He concludes by asking for God's blessings on Lincoln, Sumner, Garrison and Phillips, and all those who helped. He notes the word imprinted on the hearts of those who sought their freedom was “LIBERTY.” Item 46. $2,500.

Next is a pair of almost identical photographs mounted on a card labeled on the back as “Colored School.” It looks like it may have been intended for viewing in an old stereoscope where two images of one scene, taken at slightly different angles, enables the device to create an illusion of three dimensions. The image is circa early 1870s and the school was in Aiken, South Carolina. The photographer was James A. Parker and it displays a group of Black schoolchildren in front of a small schoolhouse. Langdon Manor has not been able to identify the school. A man in the foreground is holding some round object above his head. Item 12. $250.

The dramatic photo seen on the cover of this catalogue comes from a folder filled with various pieces with the title Black and White America. The collection was published by the Time Education Program in 1969. It was distributed by Time-Life to educators to encourage classroom discussion of racial issues. The editors warn their teacher-recipients “Our nation is moving toward two societies, one black, one white—separate and unequal.” Sadly, it appears we have arrived at that destination, and while there are more legal protections than 50 years ago, the gap remains wide and understanding between the races seems to have improved very little. There are essays, photographs, and other material designed to get mostly White students talking about the issues, and maybe, achieve greater understanding. Item 23. $1,350.

Lena Horne was recognized across racial lines as one of the most beautiful and glamorous of women in the middle of the twentieth century. She made her mark as a singer, but also as an actress, civil rights voice, and a businesswoman. She made the most of her beauty to form Lena Horne Beauty Products in the 1950s. In 1959, the company began seriously promoting itself through advertising in local papers, They were looking for sales representatives. The plan was to open storefronts from which agents could also go out and visit people in their homes. There are still numerous stock certificates from her company available online today, but the only way you can cash them in is to sell to another collector. Item 2 is a collection of photographs and other material pertaining to the business that were used in Oakland in 1959. There are numerous photographs of Ms. Horne, a stock certificate, promotional material, and other items. While this collection came from Oakland, the company was promoting itself and its products across the country. Ultimately, the company failed. It made its big push in the early 1960s, including advertisements in Ebony Magazine, but 1963 seems to be at or near the end. Advertising stopped then, we have located no stock certificates dated later than that year, and some locations offered close-outs then. Langdon Manor could find nothing more about them after 1963. $1,350.

Now here's a word from the other side. Item 25 is a broadside for a 1915 showing in New York City of the film Birth of a Nation. The film is recognized for its innovative camerawork. At three hours it was the longest firm ever produced at the time, and was an enormous success, earning director D. W. Griffith a small fortune. It was also an ugly, racist movie. Taken from the book The Clansman, it was a celebration of the KKK, making the murderous, racist organization out to be defenders of traditional values. Griffith lost most of that money back on his next film, and though he continued to produce films for another couple of decades with varying degrees of success, none came close to being as successful or influential (in a negative way) as Birth of a Nation. The broadside plays up the movie as bringing a message of peace, a bit ironic considering the Klan's less-than peaceful ways, but that was more of a North-South peace thing than one of Black and White. $750.