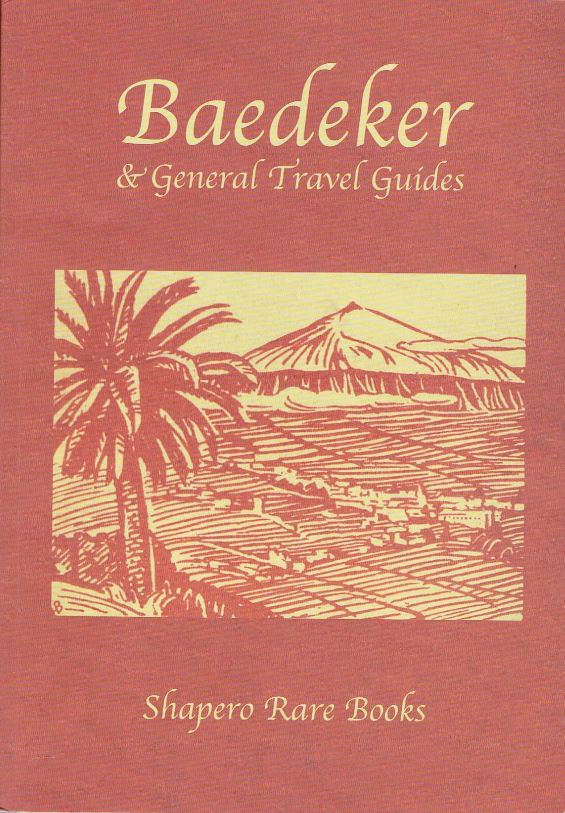 Baedeker and other guides.

Shapero Rare Books has issued a catalogue of Baedeker & General Travel Guides. If you think you've seen this before, you haven't. They offered a similar catalogue this spring (see here). Most guides came from the German firm of Karl Baedeker, and the English firm of John Murray, plus various other guide publishers. While Baedeker was a German firm, they published guides in several languages, German, English, and French, for travelers from their respective countries or others where the language was spoken. Most of the guides come from the 19th and early 20th centuries. These guides will bring you back to the days when we all felt comfortable to travel wherever we wished. May those days return soon. These are a few selections from this new catalogue of travel guides.

Here is something else we used to do that will hopefully return next year – observe the Olympics. Frenchman Pierre de Courbetin came up with the idea of reviving the ancient sports meeting as an international competition. He originally planned them for Paris, but then decided that Athens, their ancient home, was the appropriate venue. In 1896, after a hiatus of a couple of millennia, the Olympics returned. They would bring people from all over the world to Greece. Naturally, they would need some guidance in how to get around. De Courbetin asked Baedeker if they would publish a guide for the occasion. The result is this very rare Baedeker guide, Athens and Its Immediate Environs, published in May 1896. This is one of the rarest English Baedekers as it was published solely for distribution in Greece for the Olympics. It contains two folding maps. Item 1. Priced at £12,000 (British pounds, or approximately $15,582 in U.S. currency).

This is the scarce first edition of the travel guide to Great Britain, published in 1887. It contains 14 maps, 24 plans, and a panorama. This was not the first guide in the English language or the first targeted to British travelers. Baedeker had long provided guides for English travelers visiting other lands. This was the first one intended to help them visit their own country. It became the basis for a German edition, published two years later, to guide Germans along a visit to Britain. Item 33. £500 (US US $648).

Here is another first edition for English-speaking travelers in an English-speaking land. This time it was America. Published in 1893, this Baedeker is United States with an Excursion into Mexico. This was the first Baedeker Guide originally written in English, the writer being their English editor, J. F. Muirhead. Muirhead would later write some of his own guides. This guide contains 17 maps and 22 plans. Item 62. £400 (US $518).

This is the fourth and last edition of the U. S. Guidebooks, though its range is a bit more extensive. Published in 1909, this most comprehensive edition is titled United States with Excursions to Mexico, Cuba, Porto Rico, and Alaska. It contains 33 maps and 48 plans. Item 64. £200 (US $259).

Not all Baedekers editions concerned journeys to western lands. There were guides for places such as India, Russia, the Middle East, and this one to Egypt. Item 10 is the eighth and final edition in English of Egypt and the Sudan, published in 1929. It is the most comprehensive edition of this guide to the land of ancient monuments that long had fascinated Europeans. It contains 106 maps and plans. This edition is particularly interesting as it includes a description of the then recent excavations of the tomb of King Tutankhamen. £300 (US $388).

Next is the rare first edition of Handbook for Switzerland, published by John Murray in 1838. This guide was written by John Murray III. Murray would publish nineteen editions of this Swiss guide from 1836-1904, but only those editions through 1846 were written by Murray. It contains a folding map and panorama, with “Corrections and Additions” bound in. Murray published more than guides. By far the most important and influential work of his career was his risky publishing of On the Origin of Species by Charles Darwin in 1859. Item 162. £600 (US $776).

This one is a different sort of guide. It's a railway guide. George Bradshaw was a mapmaker and printer who published his first railway guide in 1830, but it wasn't very extensive. It covered the opening of the Liverpool-Manchester line, the world's first intercity railroad. In 1839, he began publishing his famous timetables and first guide. It sold for 6 pence. In 1840, he changed the name to Bradshaw's Railway Companion and raised the price to one shilling. Item 170 is a copy of this edition. He soon cut the price back to 6 pence so this is an uncommon price. With a few railroads now in operation, the map in this edition is noted as the first national railway map in the world. £1,000 (US $1,297).