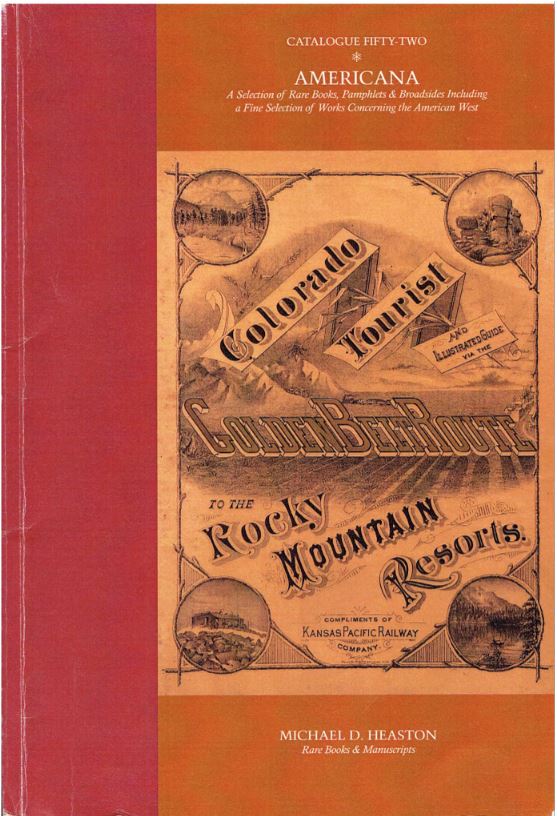 Michael D. Heaston Rare Books & Manuscripts has released their Catalogue Fifty-Two Americana. The subtitle is A Selection of Rare Books, Pamphlets & Broadsides Including a Fine Selection of Works Concerning the American West. The fine selection concerning the American West is something of an understatement. There is much western material that is uncommon or rare. You may not know most of these items but they are a fascinating group and I promise you will want a lot of them. Railroad collectors will be excited by the broad range of related material, mostly from railroads west of the Mississippi. There is also some great Civil War material, including personal accounts by people who gave so much for their cause. War truly is Hell. Here are a few of the selections offered, but it barely touches the surface of what is contained among the over 300 items presented.

We begin with an archive of material from one of the most famous and controversial lawmen of the Old West – Pat Garrett. Pat Garrett was elected Sheriff of Lincoln County, New Mexico, and soon burnished his reputation with his pursuit of the fugitive William Bonney, better known as Billy the Kid. The Kid had killed some people, including a couple of deputies during an escape from jail while awaiting execution. Garrett eventually caught up with Billy and shot him while unarmed and unaware the unknown figure in the dark was a threat. The nature of the killing did not make Garrett the hero he expected, and the remainder of his life would be up and down. Garrett moved on in 1882 to the Pecos Valley and then Texas and participated in some failed business ventures. In 1896, he returned to New Mexico, where he was appointed Sheriff of Dona Ana County. He was hired to find the killer(s) of Albert Fountain, an attorney who investigated corruption and earned his share of enemies (he also unsuccessfully defended Billy the Kid years earlier). Fountain and his eight-year-old son were ambushed and killed. Garrett arrested a couple of suspects, but eventually they were acquitted. No one was ever convicted of the murders. This archive contains material from his time as Sheriff of both counties, but the most interesting piece is a letter he wrote to his wife dated March 22, 1896. Garrett writes, “Everything so far has gone as well as I could wish, the Sheriff's office of this county was turned over to me this morning, so I have decided we would locate here for a while at least...” He sends her $40 so she can move the family from Texas to Dona Ana County. He then inquires about his new son, whom he has not yet seen (Garrett had eight children). He concludes, “I will leave here on the 24th to go to the plane east of here to make another [search] for Col. Fountain's body.” That was most likely the area that is now White Sands National Monument, but Garrett's search was unsuccessful as the Fountains' bodies were never found. Item 86. Priced at $25,000.

Monroe Edwards was a character and criminal both in the then Republic of Texas and the United States. He even tried swindling money for a while in Britain. He was noted for smuggling slaves into Texas and for various forgeries. Eventually, the law caught up with him and he was convicted and sentenced to 10 years in prison in 1842. He never got out because he died in five. Item 277 is a notice of a Sheriff's Sale by Sheriff John W. Brooks of Brazoria, Texas, from 1846 while Edwards was still living, “to satisfy a judgment of Edwin Mullin (?).” Perhaps appropriately, the property being sold off was a slave, “One Negro Boy named Jeff about eight years old.” If this doesn't bring home the horrors of slavery, I don't know what does. Eight years old? Where was his mother, father, family? An eight year-old boy, separated from all family, being sold off alone? Man's inhumanity to boy. Item 277. $1,000.

Here is another sales offer, weird, but not in the horrible way of the last item. This is a 12-page prospectus for The Clover Valley Ranch, Humboldt and Elko Counties, Nevada, from 1913. It's easy to understand why the owner wanted to get rid of it, but not why someone would want to buy it. The Clover Valley Land & Stock Company describes their property as “The tract is almost barren today...The buildings and corrals are old and practically worthless...The range land is valuable for grazing purposes and has no agricultural purposes.” At least there was a lot of land – 48,000 acres. The limited uses and isolation of northeastern Nevada make this one of the most sparsely populated parts of the country even today, though its mountain vistas and stark landscape make it interesting for people looking to get away from it all. Item 181. $500.

President Andrew Johnson was considered to be very soft on the South after the Civil War. He rose to the office after the assassination of Abraham Lincoln, so Reconstruction was largely in his hands. Like Lincoln, he wanted to bring the South back into the fold with minimal disruption, but in the process showed very little concern for the future of the former slaves in a hostile South. The result is he found himself at loggerheads with the Radical Republicans, who sought more demands on the southern states. He was impeached by the House and survived removal from office in the senate by a single vote. However, in this address, he sounds more forceful in his condemnation of the South. Only 8 months after his rise to the presidency, in this December 17, 1865, supplement to the San Antonio Herald, Johnson is quoted as saying, “It is manifest that treason, most flagrant in character, has been committed. Persons who are charged with its commission should have fair and impartial trials in the high and civil tribunals of the country, in order that the Constitution and the laws may be fully vindicated, the truth clearly established and affirmed that treason is a crime, traitors should be punished, and the offense made infamous at the same time that question may be judiciously settled finally and forever that no state, of its own will, has the right to renounce its place in the Union.” Johnson's loyalty to the Union, despite being from a border state, was based more on his antipathy for the plantation owners than sympathy for the slaves. Despite his moderation toward the South for his day, his emphatic use of the word “treason” sounds radical today when the word is seldom used to describe the leaders of the Confederacy, who are now widely honored. Item 1. $3,000.

This is an unusual railroad item. The title is Voltagal, Genius of Electricity; or, Ned Benson's Adventures and Talk with one of the Genii. It is attributed to "'A Man' of the 'Great Rock Island Route'." It then notes that the book is “Respectfully Dedicated to the Boys and Girls of America, by the General Ticket and Passenger Agent of the Chicago, Rock Island & Pacific Railway.” That agent, and evidently the “Man” who wrote this book, was Everitte St. John, who worked in Chicago. This book was given out to young passengers of that Mighty Fine Road for Christmas 1885. It is designed to teach young people about electricity, its development and uses. While the author says it is not a scientific work, young people, even older people could have learned a lot about this force that was just starting to come into its own at this time. The story is about young Ned Benson, who meets the mysterious genius Voltagal while riding on, naturally, a Rock Island Line train. Voltagal tells him all about electricity until the ending when Ned opens his eyes and his mother informs him he has been dreaming. Item 305. $500.