Books, Manuscripts, Ephemera, Etc. Related to the Law from The Lawbook Exchange 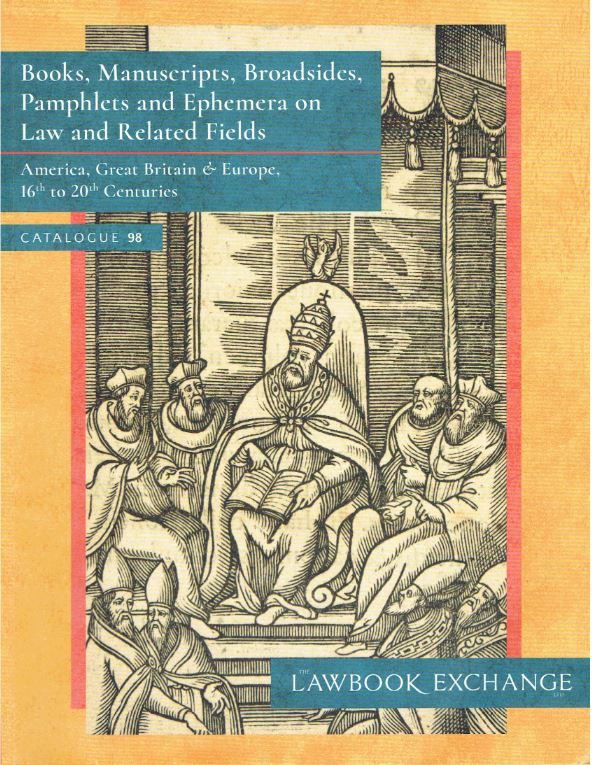 Books, manuscripts, etc. on the law.

The Lawbook Exchange recently published a catalogue titled Books, Manuscripts, Broadsides, Pamphlets and Ephemera on Law and Related Fields. America, Great Britain & Europe 16th to 20th Centuries. Catalogue 98. That heading cuts a wide swath, which is to say, there is all sorts of different material in here. The common thread is it all relates to the law. Some of it may seem dry to those not well-versed in legal matters. Those gentlemen on the cover don't seem particularly excited about what is presumably a book of canon law that is being read. However, many items in here are more like those legal and courtroom dramas that keep people glued to their TV sets all day. There is something here for everyone's interest in the law. These are a few samples.

This is one of the longest titles I've seen, but it does have the advantage of giving you a very thorough idea of what is in this book: A faithful narrative of the most wicked and inhuman transactions of that bloody-minded gang of thief-takers, alias thief-makers, Macdaniel, Berry, Salmon, Eagan, alias Gahagan; (with a curious print of Macdaniel) as also of that notorious accomplice of theirs, Mary Jones, and others. Shewing the diabolical arts by them practised, to get innocent persons convicted for robberies, and to share amongst themselves the rewards paid for such convictions. By what stroke of providence it was that the compiler of this narrative became acquainted with this mystery of iniquity. The unwearied diligence by him made use of to get to the bottom of it: the manner of his counter-acting those worst of villains... Also the informations the author of this narrative received relative to the affair of Kidden, who was falsly accused, convicted, and executed, Feb. 4, 1756. His searching this, at that time clouded villany, to its very source. The means made use of to bring the principal actress in this most horrid scene, Mary Jones, to justice. Her commitment, &c. for the wilful murder of Joshua Kidden. The whole being interspersed with divers other, accounts of a similar nature, and which cannot but astonish every one who considers them. As you can see by the “...” in the middle, I've shortened the title, but I think this is sufficient to apprise you of what is to be found in its pages. The author, Joseph Cox, was a constable who cracked the case. The book was published in 1756, and this case helped lead to the formation of a salaried police force in London. Item 30. Priced at $3,500.

This has been called “the most magnificent of editions of the Magna Carta.” That is impressive considering copies were being created as far back as over two centuries before printing was invented. There have been a lot of editions. The Magna Carta was, of course, the first document in England granting rights to people other than royalty. It placed obligations, however limited, on the King. What is remarkable about this edition is that it is printed in gold. Published in 1816, it was first book of any sort printed in gold in England. Publisher John Whittaker explained the book was intended “for the display of a new branch of the art of printing.” Each copy is unique, using different stock or being bejeweled in unique ways. Each, however, is printed in gold. Item 61. $10,000.

England was not the place to find defenders of the American Revolution, but there were a few. Among the most notable was Richard Price, a Unitarian minister, economist, mathematician, and political radical. He was friendly with several Americans, particularly Benjamin Franklin, but met with Thomas Jefferson and John Adams too. At the end of the war, 1781, Yale College granted Honorary Doctor of Laws degrees to just two people, George Washington and Richard Price. Item 43 is Two Tracts on Civil Liberty. The War with America, And the Debts and Finances of the Kingdom, published in 1778. These were two essays originally published separately in 1776 and 1777 which defended the Americans' rights and criticized the British reaction on economic, political, and moral grounds. $1,250.

Next is a landmark case in the field of religious rights. Unless you are a defendant's spouse, you normally can be called to testify against that person at trial, no matter how much you would like not to do so. However, communications with certain other people can also be privileged, such as communications with a lawyer who is defending you. What was not clear at the time was communications with a clergyman, and in particular, within the Catholic faith where congregants are encouraged to confess their sins to a priest. Can that priest, who encouraged you to confess, then be called before a court and compelled to repeat that confession? Such a case took place in 1813 before the Court of General Sessions in New York City. Daniel Phillips was accused of receiving stolen property. The prosecution called on his Priest, Anthony Kohlmann, who may have heard Phillips speak as to his guilt in the confessional, to testify in court. It is not hard to recognize what being able to compel a priest to so testify would do to the church's ability to get people to confess sins that may have included violations of the law. The court ruled for the inviolability of the confessional, the Priest did not testify, and Phillips was acquitted for lack of evidence. Item 69 is the court reporter's account of the trial, The Catholic Question in America: Whether a Roman Catholic Clergyman be in Any Case Compellable to Disclose the Secrets of Auricular Confession. $750.

Item 113 is an oil portrait of one of America's most famous jurists, a once Chief Justice of the United States Supreme Court. That sounds like a portrait you would be proud to hang in your living room, but maybe you better think twice about that. Your friends may wonder what sort of statement you are trying to make. This portrait is of Chief Justice Roger Taney, famous for handing down the Dred Scott Decision, probably the worst court verdict in American history. Dred Scott was a slave who was taken by his owner to a free state, where he thereby claimed his freedom. Taney ruled that not only was Scott not free, but that no black American could ever be a citizen, meaning, among other things, a free black could not even go to court to assert his freedom if kidnapped and taken into slavery. Taney's despicable decision was overturned by the anti-slavery constitutional amendments after the Civil War, yet even today, native-born African Americans running for high office have had to deal with spurious claims they are not American citizens. Perhaps such a person would like to proudly display Taney's portrait. This portrait was once owned by the Philadelphia Bar Association but they evidently no longer wished to honor Taney. This is an impressive portrait, but still... $6,500.