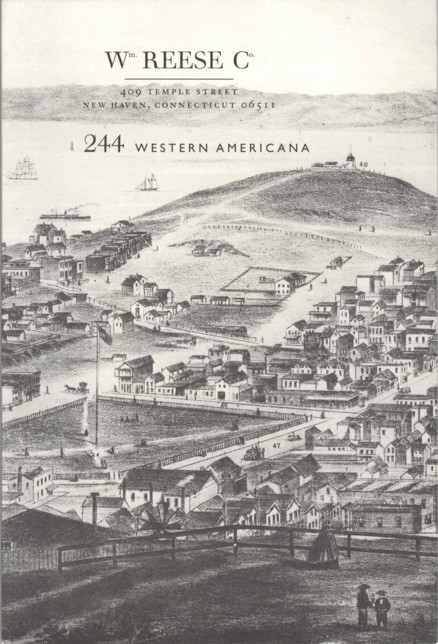 The William Reese Company's latest catalogue, number 244, is Western Americana. Reese's material is always top shelf, and this is no exception. Most material is from the 19th century, although a few items squeeze their way into an adjoining one. For Old West collectors, looking for items ranging from very interesting to historically extraordinary, Reese has 166 items waiting your perusal. They are described as all being recent acquisitions, so even those who follow Reese's offerings will want to check these out. Here are a few.

It is perhaps the most collectible of American Indian works (along with McKenney and Hall). Item 25 is George Catlin's, Catlin's North American Indian Portfolio... Published in 1844 or 1845, it is highlighted by 25 hand-colored plates of Indians he drew during the first half of the 19th century. This is a first edition, third issue (first Bohn). Catlin observed the western Indians, whom he found both noble and savage. He described the Indian as "an honest, hospitable, faithful, brave, warlike, cruel, revengeful, relentless, - yet honourable, contemplative and religious being." One can assume Catlin had mixed feelings about these natives. However, what he most saw was a dying race and a dying culture. He found himself in a race to preserve, through his text and drawings, a culture which, he rightly determined, was quickly coming to an end, at least in anything resembling its native state before the invasion of their homeland. His book is of major importance in preserving that culture as it once was. Priced at $150,000.

Item 26 is a very rare Catlin item, and one that he disclaimed and disavowed. It is called An Account of an Annual Religious Ceremony Practised by the Mandan Tribe of North American Indians, privately published by the Philobiblion Society in 1865. Catlin had given a talk about the O-Kee-Pa ceremony of the Mandans to the Philobiblion Society. Catlin had been invited to witness this sacred ceremony, which included young braves voluntarily submitting themselves to some rather gruesome tortures to display their bravery. Other aspects of the ceremony contained sexual overtones probably somewhat shocking to the typical 19th century non-native American. Evidently, Catlin was not willing to fully describe what he had witnessed, but presented a copy of his manuscript on request to some members for their own edification. Instead, they printed up 50 copies for private circulation. When he found out, Catlin retracted any connection with the pamphlet, and demanded all copies be destroyed. They weren't, and this item is one of those that survives. $17,500.

Item 109 was a most interesting attempt at overland travel a few years before the completion of the transcontinental railroad. It is a prospectus headed, Overland Traction Engine Company. Transportation by Steam from Missouri River to the Rocky Mountains. Published in Boston in 1865, and written by Asa P. Robinson and Edward Warner, the scheme was for a train without tracks. The locomotive would haul its load over bare ground, and through rivers so long as they were not too deep, traversing the relatively flat land east of the Rockies. It was a major improvement on the cattle train then used to haul goods, and much simpler and less expensive than building a railroad. However, there were some shortcomings. All in, the engine weighed 54 tons. On its maiden voyage, it got stuck in the mud. Was this really a surprise? While we are not certain of this, it would seem that the writer is the same Asa P. Robinson who was a railroad designing engineer (not the type of engineer who actually drives trains) who came from Boston to build railroads in Arkansas a few years later and founded the community of Conway, Arkansas. $3,500.