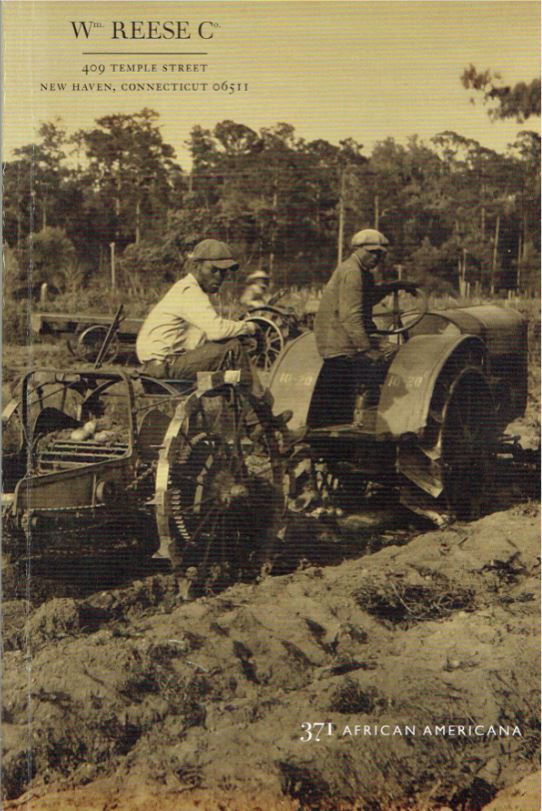 The William Reese Company's latest catalogue offers a selection of African Americana. It covers all sorts of material, books, documents, broadsides, pamphlets, photographs, personal archives. Dates range from early 18th century to the 20th. Much deals with slavery and abolitionism, and also Reconstruction and Jim Crow. Writers and creators are both black and white, and among the latter, both sympathetic and hostile. Some have little to do with race, such as family photo albums, posters for shows and musical performances, guides for African-American owned businesses, photographs of black celebrities. Nevertheless, race always comes to the forefront when it comes to African-Americans like with no other people, and one wonders when this obsession by others will finally be replaced with a focus on shared humanity. These are a few samples of what will be found in this catalogue.

We begin with the image on the catalogue's cover. It is from a commercially produced photo album of workers on a potato farm in Hastings, Florida in the 1920s. There are 18 photographs, ten of which feature African-American workers, in the fields, on tractors, and loading freight trains. Others were taken of poor white laborers on the farm. In the 1920s, Hastings, in the northeastern part of the state, was producing many train car loads of potatoes. A local cooperative packed and shipped them under the name “Superior Brand New Potatoes.” Hastings was known as the “Potato Capital of Florida.” I admit I didn't know they even grew potatoes in Florida, let alone had a capital. Do they grow oranges in Idaho? Item 46. Priced at $1,750.

Item 12 is Resolutions, at the Late Mass Convention, Holden at Concord, October 15, 1846. This was a Democratic party convention in New Hampshire, and the resolutions came from George Barstow. Barstow wasn't a typical Democrat in that he was strongly anti-slavery. His resolutions supported the abolition of slavery in the District of Columbia and its spread to any territories captured during the then active Mexican War. According to John Greenleaf Whittier, who supported Barstow, his resolutions were “clamored down and refused consideration.” This action was attributed to party leaders, notably Franklin Pierce. Barstow's friends had his resolutions printed in this pamphlet, saying, “the whip of the negro driver surely cannot have any terrors for the Democrats of New Hampshire, even if it be snapped at them by Frank Pierce, the dictator.” Six years later, Pierce would be elected President, the quintessential “Northern man with Southern principles.” Item 12. $400.

In the late 19th century, most of what Americans heard as African American music came from minstrel shows, white people covered in blackface presenting racist stereotypes of black people. On the other hand, there was occasionally the real thing, and such was the Fisk Jubilee Singers. They were formed in 1871 at Fisk University, a college created by missionaries in Nashville after the Civil War to educate the freedmen and their families. Fisk had financial issues and so their music director formed the Jubilee Singers to go on the road and earn some money on behalf of the college. Instead of being caricatures, they were dignified, talented singers singing mostly traditional songs carried over from the days of slavery. On March 24, 1875, they performed in Lynn, Massachusetts. Item 45 is a promotional broadsheet, printed on both sides, carrying two notable recommendations. On one side, it says Read This Carefully. A Song from Frederick Douglass. It explains that recently the singers had been invited to spend an evening at Douglass' home at which time he taught them a song he knew from his slave days, Run to Jesus. He said that while singing that song, the idea came to him to escape from slavery. On the other side, the heading reads, Read This Carefully. Mark Twain and the Jubilee Singers. It prints a letter from Twain of March 8 saying he was going to hear the Fisk Jubilee Singers for the fifth time and requested they sing John Brown's Body. That was an interesting choice, a song honoring the anti-slavery martyr sung by Union soldiers early in the war, whose tune was co-opted for the better known Battle Hymn of the Republic a short time later. $750.

No event during the time of slavery struck fear into the hearts of white Southerners like this one, and yet they still could not bring themselves to deal with the cause, slavery. Item 137 is Authentic and Impartial Narrative of the Tragical Scene which was Witnessed in Southampton County (Virginia) on Monday the 22nd of August Last, when Fifty-five of its Inhabitants (Mostly Women and Children) Were Inhumanly Massacred by the Blacks! This is an account of the Nat Turner Rebellion, a pamphlet by Samuel Warner published in 1831. Nat Turner was a slave who had for years believed he would be called upon to lead his people to freedom. He took an eclipse of the sun as a message that the time had come. They attacked whites in the area as mercilessly as they had been treated for centuries. The rebellion was short lived and whites killed twice as many blacks, many without regard to whether they were participants, but even with the revenge, the message was in – so long as there was slavery, there was always a risk of rebellion, especially considering the number of slaves in an area was often greater than the number of whites. It led to attempts by some whites, notably the grandson of Thomas Jefferson, to bring about a gradual end to slavery, as had earlier been done in the North, but ultimately the South chose to live with the fear and act brutally in order to preserve slavery. Item 137. $13,500.

Eventually, the South's intransigence on the issue of slavery led to the civil war. By March 11, 1864, when this broadside was issued, there was already an air of desperation for their cause. Like Nat Turner, they inflicted much damage on their foe, but their foe had superior manpower and the imbalance was taking its toll. The South could not find more recruits while the North still could. There was one more source of healthy strong men in the south, but their interests were in a Northern victory, not a Southern one. They had little reason to be loyal to the Confederacy. The South was desperate, thereby opening military service to blacks, free and enslaved. Those who were slaves would be “volunteered” or conscripted through their owners, not their own choice. The owners, not the slaves, would be compensated for their labor. The slaves had no choice. Naturally, the Confederates feared that if armed, the slaves would turn their guns on them, so they were limited to “certain capacities,” providing support, building forts and such, as opposed to fighting. In 1865, the war almost lost, Jefferson Davis even recommended allowing slaves to fight in return for getting their freedom, but that freedom had already been granted by the Union so there remained a risk that they would turn on the South. That plan was never adopted. Item 32 is Circular. Adjutant and Inspector General's Office, General Orders, No. 32...An Act to Increase the Efficiency of the Army by the Employment of Free Negroes and Slaves in Certain Capacities. $5,000.