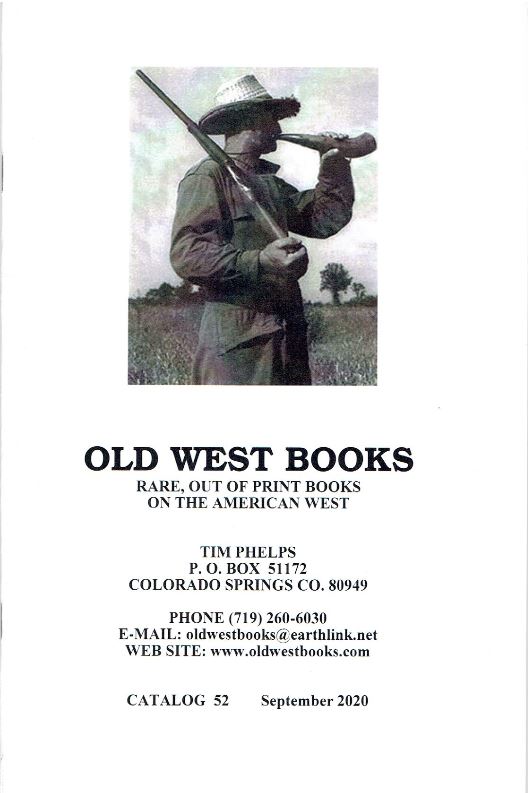 Tales of the Old West.

Old West Books has released their Catalog 52 September 2020 of Rare, Out of Print Books on the American West. Having issued a catalogue earlier this summer, proprietor Tim Phelps notes he had not planned another so soon, but “what the heck... So while your hunkered down, maybe this catalog will take your mind off things for a few minutes.” Indeed it will, as it will take you back to the days of the old wild West, when people wore masks over their faces for reasons other than preventing the spread of a virus. Sounds a bit ironic, but those were the good old days. May they soon return. Here are a few of the selections being offered.

Southern California doesn't sound like typical stomping grounds for western outlaws, but it was a very different place in the 19th century. Here is the story of Vasquez or the Hunted Bandits of the San Joaquin Containing Thrilling Scenes and Incidents Among the Outlaws and Desperadoes of Southern California With a Full and Accurate Account of the Capture, Trial, and Execution of the Noted Bandit. That title gives away the ending. Tiburcio Vasquez grew up in California when it was still part of Mexico. He was an educated man, fluent in Spanish and English, handsome, and charming, particularly with the ladies. Vasquez also felt that as a Mexican, he was not treated fairly, which helped lead to his antisocial behavior with those other than the ladies. He joined a bandit gang, later became the leader of one. He was engaged in all sorts of crimes, mostly stealing from shopkeepers and travelers. He was imprisoned twice but served his time, badly wounded once but survived, and found an ideal hideout among the rocks and caves north of Los Angles now known as Vasquez Rocks. There are several landmarks, even schools named for him, surprising for a bandit, but many among the Mexican community saw him as a defender of their rights. He was finally betrayed and captured in 1874. Vasquez denied ever killing anyone, though several people were killed during his robberies. Since the law deems you guilty of murder if you are part of a killing, it didn't matter whether he actually pulled the trigger. Vasquez was convicted and executed in 1875. This account, published in 1875, was written by George Beers, a reporter for the San Francisco Chronicle, and Old West notes that he undoubtedly embellished his account, “but as a whole it is dependable.” Item 3. $2,500.

Just as Tiburcio Vasquez specialized in robbing from Anglos, Alameda County Sherrif Harry Morse specialized in capturing “banditos,” Mexican bandits. He was sheriff from 1864-1878 so his time overlapped with Vasquez's. He tracked Vasquez, reportedly for thousands of miles, and received the tip (which he gave to the Los Angeles County Sheriff) which led to his capture. He captured several notorious bandits, but still, the title of this pamphlet by Charles Howard Shinn, does seem a bit over the top. It is, Graphic Description of Pacific Coast Outlaws. Thrilling Exploits of Their Arch-Enemy, Sheriff Harry N. Morse, For Many Years the Terror of the Brigands of California – A Man of Intrepid Courage, Wonderful Skill and Splendid Leadership. Some of his desperate Hand-to-Hand Encounters with Bandits. Published in 1887, there was a reason for such a lavish biography. After retiring as Sheriff, he founded a detective agency and was looking for customers. Item 65. 1,750.

This is one of those overland travels from the time when going west was a dangerous undertaking. Virginia Wilcox Ivins left Keokuk, Iowa, in April 1853 with her husband and baby-to-be in a group of ten – destination California. She was just 20. They arrived in Sacramento in September, but it wasn't a lot of fun along the way. Eberstadt described her account as follows: “One of the few journals of the Overland kept by a woman, it forms a record of toils and hardships truly pathetic. In the Sierras, with only men about and no water near, this poor lady became a mother.” Published in 1905, the title is Pen Pictures of Early Western Days. The first part describes her days in Keokuk where she lived with her uncle, the founder of the town, but it then goes into describing her long journey. The book was privately printed by her and her husband in a small run so it is quite scarce today. Item 22. $1,250.

Ezra Meeker was a hardy soul. He made the Oregon Trail journey in 1852 and eventually settled in what is today the city of Puyallup, Washington. He was its founder, and his statue can be found in Pioneer Park on the site of his original cabin. However, it is not that journey that makes Meeker such a remarkable individual. It is that he went back and did it again, 54 years later in 1906. By then, he was 76 years old. Of course, he could have taken a train then but that would have been too easy. He provided an account of his travels and his life in Oregon/Washington in his book Ventures and Adventures or Sixty Years of Frontier Life. Fifty-six years of Pioneer Life in the Old Oregon Country; An account of the Author's Trip across the Plains with an Ox Team in 1852 and His return in 1906, published in 1909. Amazingly, even that wasn't all for Meeker. The year after his book was published he made the journey again at age 80. In the following years, he would make the trip several more times, though this time by train, automobile, and finally, airplane. Ezra Meeker lived to be 98. This copy is inscribed by the author. Item 34. $90.

Next is a portrayal of the developing West from the point of view of a white man with little regard for the natives they displaced from their land. The title is Transition of the West. Portrayal of the Indian Problem in the West and the Trails of the Pioneers Who Reclaimed this Country from Savagery to Civilization. It took a lot of “civilized” killing to reclaim the land for civilization. It covers subjects like Custer and the Little Big Horn, Fetterman Massacre and Whitman Massacre. This copy is inscribed by the author, Alfred James Mokler, “To my friend of 35 years George B. McClellan.” That would not be the well-known Civil War General and opponent to Lincoln in the 1864 presidential election but almost certainly his son, George McClellan, Jr. McClellan, Jr., was a Democrat who was elected a congressman and Mayor of New York. He then tried to repeat his father's success in securing the Democratic presidential nomination in 1904 but did not fare nearly so well. He received 3 votes in the convention to finish tied for ninth. Considering the nominee was the hardly spectacular candidate, Judge Alton Parker, and the nomination was effectively to serve as cannon fodder for Theodore Roosevelt, it was not a great performance. He did not run for office again. Item 38. $450.