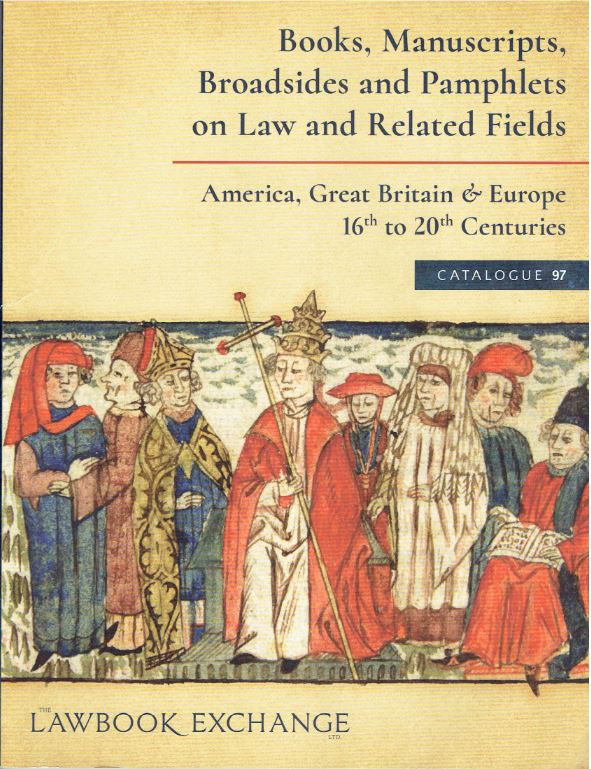 The Lawbook Exchange has issued a catalogue of Books, Manuscripts, Broadsides and Pamphlets on Law and Related Fields. America, Great Britain & Europe 16th to 20th Centuries. One of the nice things about lengthy titles is they can describe what is in a catalogue without need for further explanation. This title covers what is to be found in this selection completely. We might add that the law books in here are both of the technical sort, of interest to legal scholars, and those that were prepared for the rabble, such as accounts of sensational trials. Whatever your interest in the law, there is a good chance you will find it here. These are a few of the less technical works.

If you think the picture on the cover of this catalogue looks like an old style, you are right. It comes from an edition of the Constitutiones Clementinae of Pope Clement V. It is a codification of canon law issued by Clement V. Not even this book is as old as the issuance of this statement as it came in 1314. Clement V died shortly thereafter, leaving some doubt as to their legitimacy, but that was cleared up when they were reissued by his successor, John XXII. This edition was printed in 1482, before artists knew much about perspective. It came from the press of Anton Koberger of Nuremberg. Item 24. Priced at $12,500.

Extreme religious views can lead to unpleasantness in Salem, Massachusetts, as some supposed “witches” could attest. This one came much later. George Barrell Cheever was a new Congregationalist minister in town is 1833. He was of intense moral views. It made him a fierce supporter of abolitionism and temperance. He also had less than complimentary views on the theology of the Unitarian Church, a powerful force in Salem. John Stone was a deacon in that rival church whose primary occupation was running a distillery that had been in the family for three generations. Cheever attacked, with an illustrated broadside and newspaper article. It depicted a “Deacon Giles” in a most unfortunate manner, as a greedy, advocate of the Devil and other such unflattering attributes. It didn't take the townfolk much time to identify who “Deacon Giles “ was, Unitarian Deacon Stone. They were outraged. Rev. Cheever was tried for libel and convicted. He was fined $1,000, an enormous sum of money in those days, horsewhipped, and sentenced to 30 days in jail. This pamphlet was written by one of Stone's defenders, Charles W. Upham, The Charge of Ignorance and Misrepresentation Proved Against the Rev. George B. Cheever. Cheever later moved to New York where he continued to carry on his attacks on slavery and alcohol. Item 121. $750.

If you think Rev. Cheever must have let it go after that humiliating verdict, you are underestimating his determination. He continued to have his broadside published for many more years. Here is one from 1865-1867, printed by the National Temperance Society and Publication House, in New York. It is headed Deacon Giles's Distillery. The large image depicts a distillery being run by several devil-looking creatures with barrels labeled “Deacon Giles Distiller” and “N. E. (New England) Rum.” A business office to the side has a sign reading “Deacon Giles's Counting Room Bibles For Sale” to reinforce Cheever's claim that Stone loved money. Item 20. $1,500.

I always thought that the guillotine was an original invention of French physician Joseph-Ignace Guillotin. It turns out similar devices were employed for several centuries before Dr. Guillotin appeared. One such device was the “Maiden” which was employed in Scotland from 1565-1710. It consisted of a heavily weighted blade which, when set loose, slid down some grooves in its sideboards and struck the neck of the condemned. Sounds very much like the guillotine. It is illustrated in this much later account of the device (1870), History of the “Maiden” or Scottish Beheading Machine, With Notices of the Criminals Who Suffered by It, by William Thompson M'Culloch. Item 66. $750.

Here is a book with an interesting provenance. The title is Remarks on the Constitution and Practice of Courts Martial... by Thomas Frederick Simmons, published in 1852 (a fourth edition). It was the standard British work on courts martial at the time. This copy was owned by J. E. B. Stuart. Stuart was an officer in the U. S. Army, promoted to Captain shortly before tendering his resignation in May 1861. He joined the Confederate Army, rising to general and having a storied career. Penciled into this copy is “J. E. B. Stuart. 1st Cavalry.” That would date it to 1855-1861. Could Stuart have been concerned that this might be his fate if he supported the Confederacy? He never had to worry about it, but for the wrong reason. Stuart was killed in action in 1864. Item 96. $3,500.

The Lawbook Exchange describes this book as being “an early form of consumer protection.” The title is The Tradesman's Lawyer and Country-Man's Friend. There is no stated author or editor, but it was taken from various historic legal treatises. The purpose was to protect regular folks, the “tradesman” and “countrey-man,” from being victims of the wealthy, whose privilege allowed them to be learned in the law. The book is designed to help balance the scales of knowledge and justice. The author explains, “As for the Persons of higher Rank they have both Learning and Leisure to read the Law; but for the Commonalty and ordinary Tradesman most are wanting in the first, many cannot obtain the latter, and some are strangers to both...” It sets them up to be “put upon by cunning Men, who contrive to prey upon their ignorance.” This is a first edition, published in 1703. Item 53. $5,000.