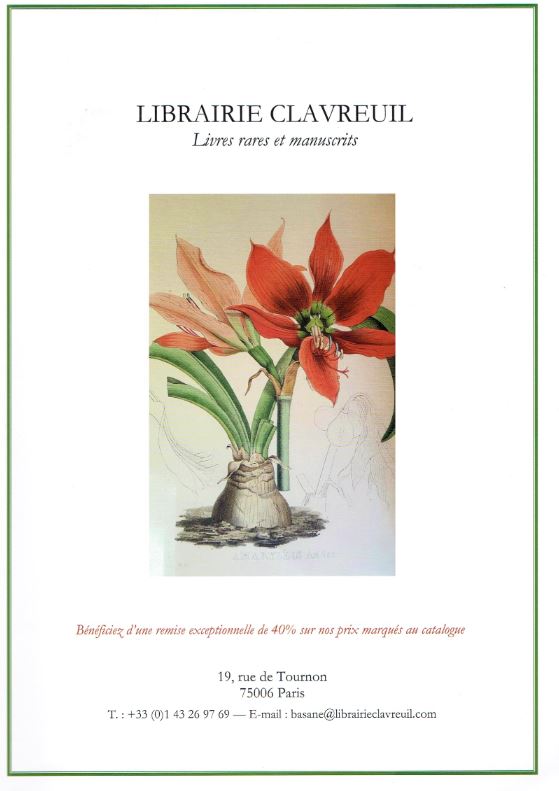 The latest from Librairie Clavreuil with van Geel flowers on the cover.

Librairie Clavreuil has issued a new catalogue of Livres Rares et Manuscrits (rare books & manuscripts). Librairie Clavreuil is located in Paris, the catalogue is in French, and so are most of the books. Most are published in France as well. If you collect some variety of French material, this is your catalogue. We will mention that there are a good number of French translations of books written in English, so English-speaking people who collect foreign translations of their favorite books will find things here too. The books found in this catalogue are also very old, easily qualifying for antiquarian status. Here are a few samples.

There aren't too many French scientists as celebrated as Marie Curie (except, of course, for her husband). Marie Curie was the first woman to win a Nobel Prize, the first person and only woman to win one twice. She won her first for physics with her husband, Pierre, in 1903, the second alone for chemistry in 1911. Marie and Pierre discovered radium, and the properties of radioactivity in 1898. The uses of radioactivity, both good as in x-rays and medicine, and bad, as in bombs, is now well-known. During her lifetime, they were not, and the potential benefits foreseen were enormous. Pierre died in 1906 in an accident, but Marie lived until 1934, when the effects of exposure to radioactivity caught up with her. Item 15 is Recherches sur les Substance Radioactives. This is a second edition of her doctoral thesis, first published the preceding year. In it she describes her discovery, this thesis being a major reason she won a Nobel Prize. Priced at €800 (Euros, or approximately $938 in U.S. dollars).

Next is a pamphet that was presented to the voters of Yonne in France. The title is Aux electeurs de l'Yonne! Profession de foi et considerations sur le systeme republicain des Etats-Unis. The year was 1848 and Frederic Gaillardet had returned from years in America to run for public office. In it he describes the republican system of government in America. That was a revolutionary year in France when Louis Philippe was overthrown. Gaillardet had an interesting background, having spent many years publishing a French newspaper in New York. He once wrote cooperatively with Alexander Dumas, but they got into a dispute that led to several lawsuits and eventually a duel between the two. No one was hurt. None of this helped Gaillardet as he lost the election by a wide margin. Item 24. €250 (US $293).

This is a story of dangerous liaisons, appropriately titled Les Liaisons dangereuses. The author was Pierre Ambroise François Choderlos de Laclos, who along with having a lot of names was a bored military officer who wanted to write a novel so he would be remembered after he was gone. It is a novel of intrigue, seduction, and overall lack of morality. The two rivals at the center both end up poorly as a result of their behavior. Some see de Laclos' story as a critique of the decadency of the aristocracy in the waning days to the Ancien Regime, others as merely a tale. De Laclos would later support the Revolution, but in 1782, when it was first published, his connections were with the aristocracy. While the subject matter made the book controversial, it was quickly a bestseller, and its popularity continued as attested to by this 1820 edition. Item 12. €400 (US $470).

This is a travel book published in France in the 16th century. The title is Les voyages du seigneur de Villamont, chevalier de l'Ordre de Hierusalem. It was very popular in the homeland of author Jacques de Villamont, though it did not make much of an impression elsewhere. De Villamont left his home in Brittany in 1588 to travel through southern Europe, the Middle East, and Egypt. It was a time of great conflict between French Catholics and Protestants, but the Catholic de Villamont did his best to stay out of the battles, leaving the land quietly. His travels took him to Italy, Cypress, Greece, Turkey, Syria, the Holy Land, and Egypt. He returned 39 months later and his description of the places he visited made this a popular title in France, the most popular travel book of its time. It included advice for those who planned to take the tour after him. Item 50 is the third and final 16th century edition, published in 1598, three years after the first. Many more editions would follow in the 17th century, but its obscurity elsewhere can be attributed to it never being translated to any other languages. €2,500 (US $2,934).

We conclude with the final entry in the catalogue, Flore des Serres at des Jardins de Paris... This was the work of Belgian artist and botanist Pierre Corneille van Geel. Published in six volumes in 1834, it contains 600 hand-colored plates of various plants and flowers. It is a work of great beauty. It was originally published a few years earlier under the title Sertum Botanicum. Van Geel was also a priest and an ardent orangist, one who supported the United Kingdom of the Netherlands. It led to trouble for van Geel when his home territory revolted and broke away from the United Kingdom to form the independent state of Belgium in 1830. Van Geel moved to Paris where he died in 1838. One of his flowers is depicted on the cover of the catalogue. €48,000 (US $56,281).