The Unexpected from Samuel Gedge Ltd. 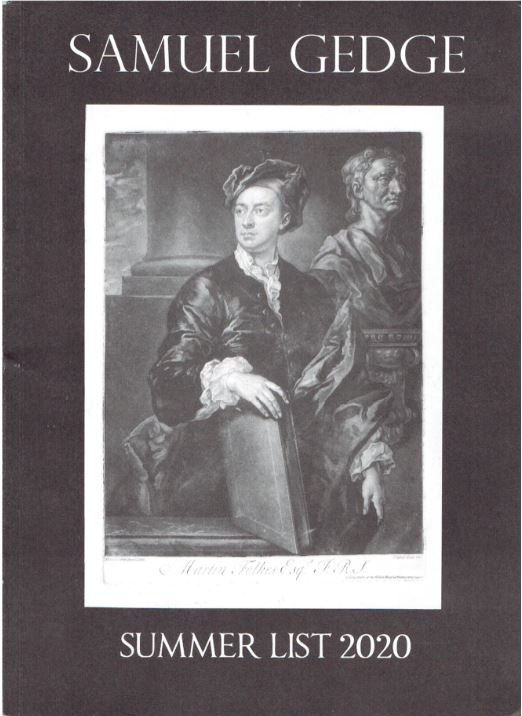 Samuel Gedge Ltd. has issued a Summer List 2020. It contains what we expect from Gedge – the unexpected. There is much in the way of documents and manuscripts, very old, generally 17th to early 19th century. There are books, but mostly not famous classics. They are more likely to be unusual, including rare French translations of sensational English novels from the late 18th century. There are also broadsides, often posters for plays or displays of unusually skilled people or animals. Elephants may not seem that unusual today, but a couple of centuries ago they were. Here are a few of the items we found in this latest catalogue.

The late 17th century English philosopher John Locke is considered one of the greatest of his trade, which is, in effect, thinking. Locke was an empiricist, one who believed we learned most truths through observation. That doesn't sound very groundbreaking now, but in his time, most philosophers believed we learned things through logical deduction. That is useful, but one needs observational points from which to start, and if observation conflicts with your logical deductions, you need to rethink your logic. Locke's philosophy went well beyond this, as he argued for better relations between people and tolerance of those who were different (as long as they weren't too different). Locke's Essay on Human Understanding, published in 1690, remains one of the most important philosophical works even today. It is filled with wisdom, but was a bit complex for many readers to fully appreciate. John Wynne, a fellow at Oxford, came up with an idea for expanding the book's reach – an abridged version. Locke agreed. He approved Wynne's edited An Abridgment of Mr. Locke's Essay Concerning Human Understanding, published in 1696. Undoubtedly, many students have been thankful for this service ever since. Priced at £4,500 (British pounds or approximately $5,883 in U.S. dollars).

Henri Grégoire lived a life balanced between two forces, with his high moral principles being the guiding light with which he navigated them. He was a priest in a conservative church, but he was also a supporter of the French Revolution and the ideals upon which it was begun. He was an abolitionist, calling for equal rights for blacks, Jews, and anyone else whose rights were crushed by intolerance. However, the ideals of the Revolution were not always supported by church authorities, leaving him in a somewhat vulnerable position. This would be even more so when the Revolution spun out of control and turned into the Reign of Terror. In 1790, when he published this book, all was still well with the just beginning revolution. The title is Lettre aux Philantropes sur les malheurs, les droits et les réclamations des Gens de Couleur de Saint Domingue, et des autres Iles Françoises de l’Amérique. That title translates to “Letter to the Philanthropists on the Woes, Rights and Claims of the Colored People of Santo Domingo, and the other French Islands of America.” It calls for equal rights for the Africans on Santo Domingo and other French Caribbean islands. Despite revolutionary France's call for liberty, equality, and fraternity, not all revolutionaries were particularly interested in bringing those benefits to the slaves. Ultimately, like almost everyone else, Abbé Grégoire ran afoul of the most radical elements of the Revolution and was imprisoned, but he kept his head on his shoulders. Being a practicing priest during the Reign of Terror was a dangerous activity. After the Revolution, Grégoire would remain steadfast in his ideals, getting in trouble with Napoleon and later the restored monarchy, but his stellar reputation among the population kept him out of harm's way. Item 152. £2,500 (US $3,267).

Alexander Bicknell was a prolific writer of the late 18th century, about whom little is known, other than that he died in 1796. He is little remembered today. His books were generally panned by the critics if not outright ridiculed. Nonetheless, his writings were so numerous that even if the critics didn't like him, some readers obviously did. Item 244 is Isabelle, Ou, La Bonté Récompensée: Histoire Attendrissante, Destinée À Instruire Le Beau Sexe En L'amusant, a 1781 French translation of an English book. The original title was “Isabella: or, the Rewards of Good-Nature. A Sentimental Novel. Intended chiefly to convey united amusement and instruction to the fair-sex.” This was regarded as one of Bicknell's better novels, though that may not be saying much. The London Monthly Review in 1777 said of it, “Death! duels! Adulteries! fornications! burning livers and breaking hearts! what would the present race of novelists do without you, ye horrid train? Yet, notwithstanding this terrible business...the work has some merit.” Bicknell was hired on to add some more excitement to Jonathan Carver's Travels Through the Interior Parts of North America, a highly respected and important work about early America, but sadly he was not credited for his contribution. £750 (US $930).

Next we have an engraving taken from a painting by Joshua Reynolds, entitled A Lady and Child. According to Wikipedia, Reynolds “promoted the 'Grand Style' in painting which depended on idealization of the imperfect.” This 1787 print depicts a well-dressed mother holding a laughing child. Reynolds' notes say the sitter was a “Mrs. Seaforth” and the portrait was paid for by “Mr. Barwell.” Richard Barwell was a very wealthy director of the East India Company, known for an extravagant lifestyle. “Mrs. Seaforth” was an alias for his mistress, Rebecca Lyne, with whom he had several illegitimate children. Reynolds had previously painted Ms. Lyne as the Vestal Virgin Tuccia. “Idealization of the imperfect?” Well... yes. Item 65. £1,250 (US $1,634).

Here is an organization whose services are needed even more today than 200 years ago when this book was printed. The title is Account of the Society of the Friends of Foreigners in Distress... published in 1814. The organization was created to help refugees and other foreigners in London in need of assistance. Its charter explains that “the object with which this Society has in view is to grant relief to indigent foreigners here, without distinction of country or religion...” It would both help foreigners who wanted to stay and assist those wishing to return home. It had a long list of wealthy British subscribers. In those days, most distressed foreigners came from Europe, but they note they also helped a Javanese woman and a Hawaiian. Similar accounts were provided by the society through the 19th century, and it shows up as still in existence today, but if so, no further information can readily be found. It must be inactive or near inactive now. Item 225. £950 (US $1,242).