The American West, Civil War, Texas and More from Back of Beyond Books 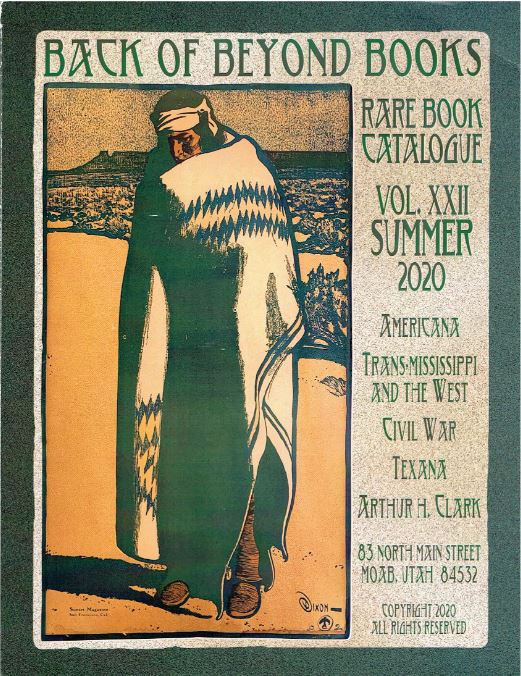 Catalogue 22 from Back of Beyond Books.

Back of Beyond Books has published their Rare Book Catalogue Vol. XXII Summer 2020. Back of Beyond is mostly a specialist of the American West, the Southwest in particular. However, this is more extensive than their typical catalogue and the selections range far and wide. There are a lot of selections from the eastern edge of the West, Texas, the Civil War, and even a complete set of Captain James Cook's three voyages. Outside of sailing along the Pacific Northwest coast on his third and final voyage, Cook didn't have much connection to the American West, unless you include Hawaii, where he was killed by unhappy locals. These are a few selections from the over 300 being offered by Back of Beyond Books.

We begin with a book that became a guide for many travelers making the journey west on the Oregon Trail. The title is Journal of Travels Over the Rocky Mountains, to the Mouth of the Columbia River, Made During the Years 1845 and 1846... by Joel Palmer, published in 1847. Palmer made the trip twice, the first in 1845 when emigration began to rapidly rise. Oregon's white population doubled that year, from 3,000 to 6,000. Palmer kept detailed notes of his journey, including places where he camped, springs, grassy areas to feed beasts, cut-off roads and such. The result was his account became a guide for later emigrants seeking to make the journey. As such, most copies of Palmer's book have long since disappeared, and many of those remaining show signs of serious use. Item 219 is a first edition, first issue of Palmer's book that shows signs of having received practical use. Priced at $7,500.

This is another travel book that provided tips for those who followed. This one is a little older, and the destination was Texas. The title is A Visit to Texas, Being the Journal of a Traveller Through Those Parts Most Interesting to American Settlers... It was published in 1834, the year before the Texas Revolution. The Traveler/Author's name is unknown, though a few names have been suggested. He bought some land in Brazoria and came to Texas to find out what he had purchased. Brazoria is located southeast of Houston, and unlike its neighbor, hasn't grown all that much since, though it has a long tradition and one of Texas' newest landmarks, a Buc-ees. The book describes Texas' scenery, natural history, and the political situation. This copy is missing the folding map but contains all four plates. Item 278. $2,200.

This is the tale of a settler whose family was supposedly wiped out by Indians. These tales were once common, some being real, some a mix, many pure fiction knowing that whites of this time would easily buy into the premise. The title of this one is Narrative of the Massacre, by the Savages, of the Wife & Children of Thomas Baldwin, Who, since the melancholy period of the destruction of his unfortunate family, has dwelt entirely alone, in a hut of his own construction, secluded from human society, in the extreme western part of the State of Kentucky. It is not clear whether Thomas Baldwin's 1835 book is based on truth or fiction. According to Baldwin, he came to Kentucky at the behest of his friend, Daniel Boone, which turned out not to be good advice. Thomas Field, in his Indian bibliography, says, “Very little of this fugitive chapbook relates to the subject of the massacre by the savages, and that little is worthless; the rest is mere rhapsody and bombast.” Wright Howes, in his Usiana, says, “Perhaps based on some actual incident of border horror in early Kentucky, but unconvincingly and rhapsodically presented.” You'll have to figure this one out for yourself. Item 11. $750.

Next is an account of Wyoming's infamous Johnson County War. It pitted large cattle operators against their small-time competitors, at a time when the open plains were rapidly disappearing. The large cattlemen claimed the small-timers were rustling their cattle, and undoubtedly there was some of that going on. However, it appears that they saw this claim more as a way to put their competitors out of business. They “retaliated” with guns, lynchings, and such behavior. The large operators were powerful, so they had the government and the law on their side. Asa Mercer had come to Wyoming to publish a journal on behalf of the large cattlemen's association, but when he realized what was happening, at great personal risk, he decided to tell the truth. His book is Banditti of the Plains or the Cattlemen's Invasion of Wyoming in 1892 [The Crowning Infamy of the Ages], published in 1894. The big cattlemen were not pleased. They had the book banned and a local court ordered all copies confiscated and destroyed. Fortunately, some copies were secreted away, although for years, the cattlemen and their families would buy up copies that came on the market and had them destroyed. As a result, this is an uncommon book today. Item 193. $3,250.

Item 288 is a photoprint of 25 members of the Mercur Fire Department. If you aren't familiar with Mercur, Utah, you need not feel ignorant. The place has been gone for a century. However, it was a large town on July 4, 1897, as witnessed by the large number of firemen in the department on that date. At its peak, it had 5,000 residents. Mercur was a gold mining town, located in Tooele County, southwest of Salt Lake City. Perhaps the firemen weren't quite as good as they needed to be. In 1902, almost the entire city burned to the ground. The citizens rebuilt it. Maybe they shouldn't have. A decade later, the mines closed, and the residents quickly left. Within a few years, no one was left, and the town dismantled. Almost nothing was left. Item 288. $175.