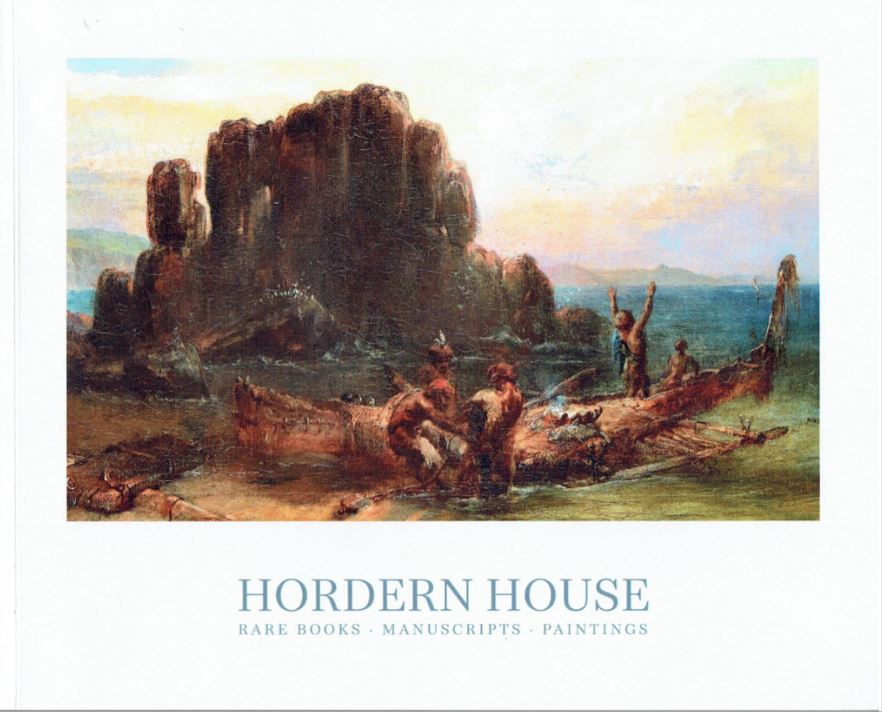 Hordern House Rare Books, Manuscripts, Paintings has released a new catalogue. It is without title or written description, but much of what can be found is related to the home continent of this Sydney bookseller, along with numerous Pacific voyages. However, Australia and Pacific items are not an exclusive. They have unrelated books that somehow made it to this far off land along the way. Books about Italian artists and architects, or Oxford University, are not Australian items, but they are to be found here, so there really is no limitation. Here are a few of the items we found in this latest selection.

We will begin with one of those non-Australian or Pacific items. There wasn't much going on down there in 1744-1746 when these volumes were published. Everyone knows Samuel Johnson for his incredible dictionary, and the fawning biography of him by his disciple, James Boswell. A decade before any of that, he was editing a collection of pamphlets and smaller format items that had been in the collection of the Second Earl of Oxford, Edward Harley. Thomas Osborne had purchased this large collection from the now late Second Earl or his estate and came up with the idea of cataloguing this vast trove of information. Johnson, in his employ at the time, was asked to take on this task. Johnson suggested going one better and publishing it all, which Osborne proceeded to do. Johnson was assigned the job of editor. The title is The Harleian Miscellany: Or, a Collection of Scarce, Curious, and Entertaining Pamphlets and Tracts... and the collection takes up eight volumes. Item 18. Priced at AU $5,850 (Australian dollars, or approximately US $4,185 in U.S. currency).

There is nothing unusual about flying to Australia... unless the year is 1781. This precedes even balloon flight by a couple of years and those people were hardly journeying all the way to Australia. This work is from the imagination of Nicolas Restif de la Bretonne. He was both quite original and controversial. The title is La Découverte Australe par un Homme-Volant... (the southern discovery by a flying man). These men and women travelled on a device consisting of large silk wings and an umbrella or parachute-like device. Don't try this yourself. They discover all sorts of creatures in Australia, mainly beings that are a mixture of humans and other animals. This book is something of a mixture itself, of early science fiction and Utopian literature. The illustrations are even more spectacular than the writing. Restif had a lowly reputation, considered to be a pornographer in his day, nicknamed “the Rousseau of the gutter.” It can be observed that while these people had fantastic wings and umbrellas, few of them had clothes. It comes in four volumes and the latter part of the fourth volume was so controversial that most copies are lacking this part. Item 32 is rare in being a complete and uncensored copy. AU $44,000 (US $31,495).

Next we have a book that took a long time to come to press. Sir Joseph Banks was the naturalist on Capt. James Cook's first voyage. They sailed along much of Australia's coastline. On the journey, Banks made hundreds of sketches of the plants he discovered, all new to Europeans. They returned in 1771, and Banks was to accompany Cook on his second voyage, but a dispute with the Admiralty resulted in his not going. However, he had much to do back home. He began working on a massive compendium of the botanical specimens he observed, hiring five artists to prepare the illustrations from his sketches. Meanwhile, he brought in Daniel Solander, a Swedish naturalist who also travelled on Cook's first voyage, to prepare the text. They created 743 engravings on copper plants of the illustrations, the project taking from 1772 to 1784 to complete. However, for various reasons, Banks delayed publication. The delays continued to 1820, when he died, his magnum opus unpublished. Banks bequeathed the plates and text to the British museum, which put them in storage for 160 years. Finally, someone dug them out and the process of publishing the work began. The British Museum brought in Editions Alecto to publish the work, and through the next ten years, 1980-1990, the 35 parts and 743 engravings, taken from almost a ton of copper plates, was finally completed. Editions Alecto figured out how to add color to what was originally black and white illustrations. The plants illustrated came from Australia and New Zealand, but also other Cook stopovers, including Brazil and several Pacific islands. This complete set was one retained by the publisher. Item 4. AU $94,500 (US $67,640).

This is described by Hordern House as “the great Australian colourplate book.” The title is Views in Australia or New South Wales, & Van Diemen's Land Delineated... The artist was Joseph Lycett, an Englishman who came to Australia in 1814 as so many others, a prisoner on a convict ship. However, unlike the average convict, he had notable artistic skills. Indeed, that had been his downfall in England. He put his artistic skills to use forging bank notes. He became a clerk for the police office, but by 1815, he was back to his old misdeeds, forging bank notes. He was imprisoned at Newcastle, but his talents got him better treatment, having come to the attention of the superintendent. Some of his paintings were given to the Governor, who sent some on to Earl Bathurst, Secretary of the Colonies, back in England. It is believed that this is what led to his receiving a full pardon. He returned to England a free man in 1822 whereupon he began work on this book. It documents some of the earliest views of Australia, its architecture and scenery. The book was published in 1825. It appears not to have been a great success at the time and it is reported that Lycett returned to the type of art he knew best, forging bank notes, was caught again, slit his throat in a suicide attempt, and later died from his wound without fully recovering in 1828. Item 23. AU $75,000 (US $53,682).

Item 6 is Narrative of a Voyage to the Pacific and Beering's Strait, to co-operate with the Polar Expeditions...in the Years 1825, 26, 27, 28. Frederick Beechey was placed in command of HMS Blossom on a mission to meet up with William Parry and John Franklin in the Arctic Ocean. Parry was sailing west from the Atlantic, Beechey east from the Pacific, while Franklin travelled overland, reaching the ocean via the Mackenzie River. Parry was forced back when his ship was damaged in ice, of which Beechey was informed, but he was still looking for Franklin. Unfortunately, they missed each other by a relatively short distance north of Alaska. While that was the main thrust of Beechey's voyage, he also visited Hawaii and several Pacific Islands, where the climate was undoubtedly more hospitable. Of particular note, he stopped at Pitcairn Island and met John Adams, the last survivor of the mutiny on the Bounty. Beechey recounts that story and what happened to the mutineers. AU $12,850 (US $9,197).