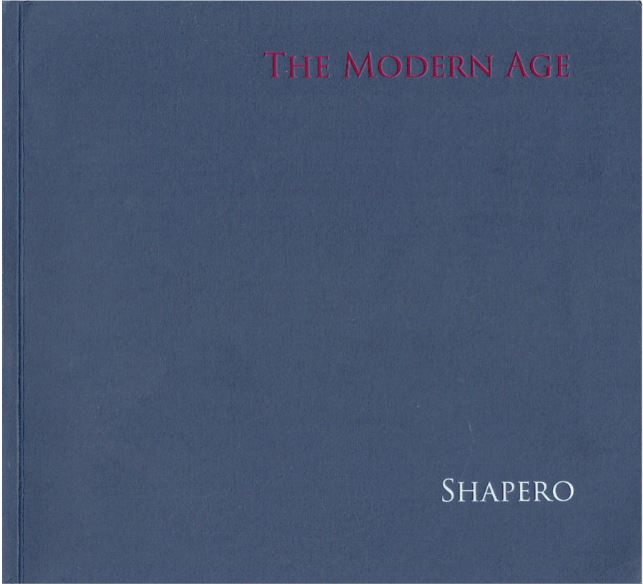 Shapero Rare Books recently issued a catalogue entitled The Modern Age. To a large extent you could substitute for “Age” another three letter “A” word - “Art.” The subtitle is Artists' Impressions of the 20th Century. It is filled with twentieth century artwork, in the form of prints, books of illustrations, a few sets of periodicals, a few photographs. Depending on your taste, you will probably either love or hate these works, most likely some of each. Realism is not the watchword, and subjects are not always beautiful. The mundane are often found, children (or ancestors) of Andy Warhol's soup cans. Some make you think, some fill you with surprise and awe, and others make you say “what the..” This is modern art, and it does what it is supposed to. Here are a few examples.

We begin with the aforementioned Mr. Warhol but in his pre-Campbell's Soup days. This one is quite early, circa 1955, but you could see what direction he was going. It is called Tattooed Woman Holding Rose. The lithograph (and consequently the woman and the rose) is printed in orange. What is interesting is the woman's tattoos. In Warhol soup fashion, they are all brand logos. She is a walking billboard for brands such as Wheaties, Kelloggs, Schweppes, Lucky Strike, Pepsodent, Greyhound, GE, Ford, Plymouth, Clairol, Dow, Dupont, Rinso, Chanel No. 5 and many others. My parents had a 1955 Plymouth and to be honest, Andy's drawing doesn't much look like a 1955 Plymouth. Item 40. Priced at £22,500 (British pounds or approximately $28,278 in U.S. currency).

Come the 1970s. Warhol started painting portraits of famous people. He was again focused on popular culture, celebrities instead of famous brands. Warhol was by now well familiar with the business side of painting and knew what would sell. Among those portraits was this print from 1972 with the most read author in the world at the time, though he was not best known as a writer. The man was Mao, Mao Zedong, also known as Chairman Mao, leader of the Chinese Communist Party. He was worshiped by the masses in China, some undoubtedly because they admired him, others because they knew their lives were at risk if they didn't. So, everyone carried a copy of his “Little Red Book” of the Quotations from Chairman Mao. By this time the horrors of Mao's Cultural Revolution had overtaken the country, and how ever much he was once much loved, the country moved on quickly and sharply from Maoism when he died four years later. The Mao image is one of Warhol's best known portraits, perhaps second only to his earlier one of Marilyn Monroe. Item 63. £67,500 (US $84,835).

Staying with the subject of popular brands and popular culture, how about a cup of Savarin coffee? Savarin was promoted by El Exigente, “the demanding one,” a fictional Latin American character who went to Colombian villages to test their coffee beans. He selected only the best, for Savarin, of course. Item 71 is a 1978 lithograph by Jasper Johns. It shows his paintbrushes, stacked in a Savarin coffee can. It is signed and numbered by Johns. Savarin was quite popular back when Johns was evidently brewing it and saving their cans for his paintbrushes, but it is no longer available and despite searching, I was not able to determine what happened to the brand. Perhaps El Exigente got lax in enforcing his standards. £20,000 (US $25,136.

Next we have an unusual combination of surrealism with commercialism, two concepts not often associated. Man Ray was the most notable of surrealist photographers, an American living in Paris in 1931. That was when a Paris electric company commissioned him to create some photographs that would promote the benefits of electricity. Electricity was still not that widely used in Paris at the time, gas being the preferred energy source. So Man Ray set about creating photographs that would show the many appliances and other uses of electricity for the average homeowner. Of course, Man Ray was not hired to create typical commercial photographs. The electric company wanted to use his creativity and originality to show that electricity was needed by the modern homeowner. Man Ray made use of his “Rayographs,” photos made without a camera, but by shining a light in a darkroom which created shadows of objects directly on photographic paper. He then added some traditional photographs, such as nude female bodies (his audience was French), and some wavy lines that make you think of electricity. His portfolio is of photogravures taken from his original photographs. The title is Electricité, and it features images of such objects as toasters, light bulbs, a fan, a chicken dinner, an iron, and a power cord with the moon as a backdrop. Item 34. £40,000 (US $50,210).

Next we have La Femme Visible from Salvador Dali. It was his first book, though a compilation of pieces previously written. It was a landmark work for him as it placed him firmly in the surrealist camp, which style he is indelibly associated. Dali started out as a realistic painter, then moving into cubism. In the late 1920s, he became associated with various surrealist artists, joining their group in 1929. This book was published in 1930. Dali is known primarily for his paintings, of which there are six plates in this book, but he also engaged in other art forms including writing. The images combine the eroticism of some of his works of the time, but the human forms are often jumbled together or their parts disembodied. It was only a year later that Dali produced his most famous painting, the Persistence of Memory (the melted watches). There is one realistic photo in the book, that of his wife, Gala, the “femme visible” to whom the book is dedicated. This copy was signed by Dali. Item 26. £5,000 (US $6,255).