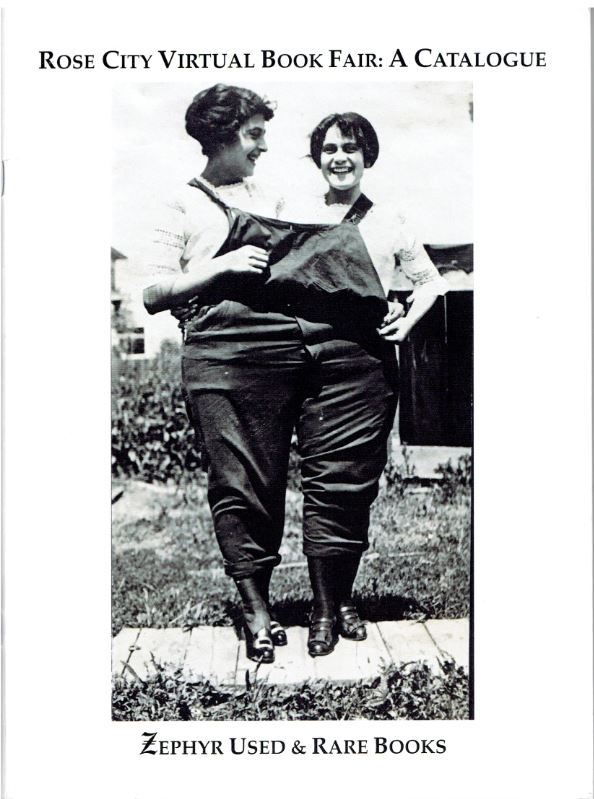 A real catalogue for a virtual book fair.

Zephyr Used & Rare Books recently issued Rose City Virtual Book Fair: A Catalogue.The book fair may have been virtual, but the catalogue is real, a printed piece you can touch and hold. The Rose City Fair usually takes place in Portland, Oregon, the “Rose City,” but this year it took place somewhere in the ether. Hopefully, it will be able to return to the Rose City next year before we all go crazy. Zephyr offers an usual mix of somewhat obscure books, not always classics, archives and collections, and ephemeral material. Their catalogues are always fun. Here are a few of the things you will find this time.

It's a bird, it's a plane...no, it's an Aerocar. I'm familiar with the Amphicars that could “drive” on water. You drive them into a lake and they become a boat. But, flying cars is new to me. Item 25 is an archive of inventor Moulton “Molt” Burnell. He also designed other types of vehicles, including some amphibious cars that had greater success, but most notable has to be his Aerocar. Sadly, it never made it to production, only six having been made. This archive is filled with drawings, photographs, blueprints and manuscript designs, some signed, by the very inventive Taylor. The archive begins after World War II and continues until the 1980s. He lived until 1995. One of Taylor's flying cars received serious consideration by Ford Motors but interest faded with the 1970s oil crisis. Item 25. Priced at $2,500.

This is a salesman's dummy for one of the best Civil War books written by a participant. Not only was a he a commander, but he was on the winning side. That could only be Ulysses S. Grant. The book being offered was Grant's Personal Memoirs, which was released in late 1885. Grant, who was dying, raced against the clock to complete his book to provide income for his family after he died. It took him 11 months. Grant died on July 23, 1885, and a promotional mounted in the rear dated July 31 says it was being sold to benefit the late President's family. This salesman did all right as the list of orders contains over 40 names. Item 40. $450.

What was the ultimate symbol that you had made it in 1952? Here it is: The Nineteen Hundred and Fifty-Two Golden Anniversary Cadillac. Cadillac has long been considered the premium luxury brand, at least among American cars. Item 17 is a dealer's foldout brochure for the '52 Caddie. Cadillac was just 50 years old at the time, but is now the second oldest American brand still in existence, trailing only GM stablemate Buick. These days there are many ridiculously priced, primarily foreign cars sold in America to compete with Cadillac's stature, but in 1952, no name was more synonymous with luxury than Cadillac. On the back of these cars was a design feature that by the late 1950s would become the rage of many automobiles, including cheaper ones – tail fins. They reached absurd proportions by then, but in 1952, they were merely modest appendages holding the taillights, a mark of the Cadillac and no other. $100.

Here is a brochure for another luxurious car, but this one you may not recall. It was printed in 1924 for the Kissel Motor Car Company. They featured many models, but apparently their speedster was the most popular, owned by numerous celebrities of the time such as Amelia Earhart, Al Jolson, Mary Pickford, Greta Garbo, Jack Dempsey, and Rudy Valee. Actress and race/stunt driver Anita King made the first American transcontinental automobile trip by a woman alone in 1915 in a KisselKar. They were in business from 1907-1931, and with an excellent reputation, you might think there would still be many around. Reportedly, only 200 of 35,000 manufactured have survived. The year of this brochure – 1924 – puts it squarely at the height of KisselKar's run. Item 21. $150.

Next we have a massive collection of photographs covering much of the adult life of Stephen Grant La Frenaye and his two wives. It consists of three albums housing 890 photographs, many with captions on the back. The years range from 1893-1945. La Frenaye was a Canadian mining engineer who took a trip to the American West early in the twentieth century. He would later move to Watsonville, California, with first wife Maude Parker La Frenaye. Maude died in 1927 in a freak accident. She was struck by a manhole cover after a sewer gas explosion. Stephen Grant married family friend Florence Curtis a few years later. The photographs document life in and visits to locations from Ontario to California, and a cruise to Latin America. Locations, events, family and others are among the subjects. The two ladies (twins?) on the catalogue cover who have discovered how to cut their cost of pants in half are among the photos. The places and subjects covered are way too numerous to mention, but they are covered in detail with many pictures in this catalogue. Item 33. $3,500.

Item 84 contains 889 fewer photographs than the previous one. However, it is a very special picture. It was taken by William S. Walbridge, “Portrait and Landscape Photographer,” circa 1887. It is captioned on the bottom margin in manuscript “Sumner Academy.” It is of school children and teachers at the academy in Slaughter, Washington Territory. The town was founded in 1886 by Levi Ballard and was named for William Slaughter, a U.S. Army officer, killed during the Indian Wars of the 1850s in this area. While Mr. Slaughter undoubtedly deserved being remembered by a city name, the citizens weren't very fond of having their town named “Slaughter.” Particularly embarrassing was the name of the local hotel, the “Slaughter House,” so it was renamed Auburn in 1893, after the city in New York that shared the same cash crop – hops. There wasn't much to this town when this photograph was taken, but today Auburn is a city of 70,000, a suburb of Seattle. $125.