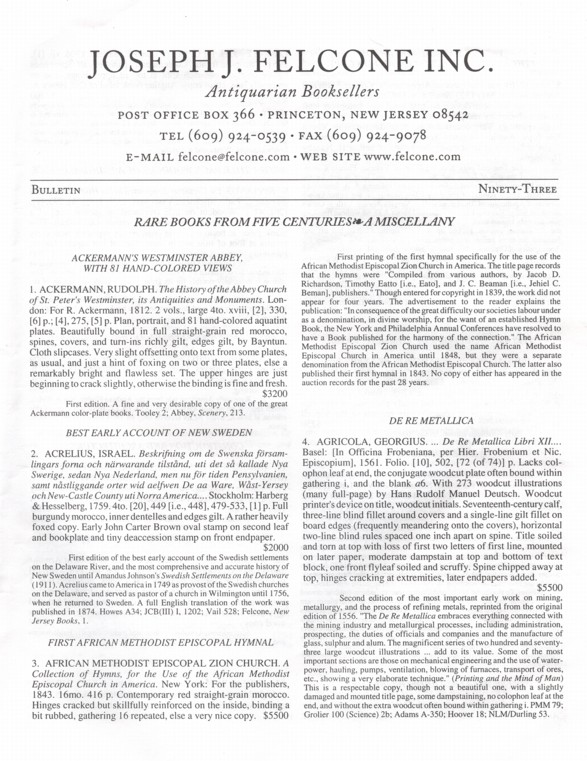 Joseph J. Felcone Antiquarian Booksellers has released Bulletin 93, Rare Books From Five Centuries. Felcone, of Princeton, is best known as the leading seller of printed New Jerseyana, not to mention having written the bibliography of that state's materials. However, this bulletin expands way beyond the horizons of the Jersey shore. Yes, there are items here for the New Jersey collector, but most of the authors herein probably never crossed the George Washington Bridge, traversed the boardwalk, or threw their coins at baskets every 500 yards along the Garden State Parkway. However, they wrote about history, science, math, sports, travel, religion, law, war, animals, and created works of literature, poetry, music and maps. Here are a few samples Felcone is offering.

Item 19 is the first edition, in Latin, of Robert Barclay's exposition of the Quaker faith, Theologiae vere Christianae Apologia, published in Amsterdam in 1676. Barclay had published 15 tenets of the faith a year earlier, but this was the first complete explanation of the beliefs of a religion less than three decades old at the time. Barclay explained that the essential belief was that each person possessed an "inner light," which enabled them to see the truth of divine revelation, and thereby making religious ceremonies irrelevant. No wonder the Quakers weren't too popular with established religious authorities! Since this "inner light" was held by people of all creeds, Barclay was a proponent of tolerance, generally in short supply at the time. Priced at $8,000.

Item 55 was an early defense of autonomy in the American colonies. A Defence of the New-England Charters, first published in 1721, argued that original charters to the colonies were binding and could not be revoked at will by authorities in England. This later edition, issued in 1765, was printed in response to the Stamp Act, imposing duties upon the colonies, without the colonists' consent. The author of this important defense was Jeremiah Dummer, and his long forgotten family name has recently been resurrected in current news stories. It was Jeremiah's brother, Lieutenant Governor William Dummer, for whom Governor Dummer Academy in Massachusetts was named. That academy made headlines when it decided to change its name to just "Governor's Academy," evidently because prospective students were put off by the name "Dummer Academy." Of course, the smarter prospective students would know the difference between "dumb" and "Dummer," but perhaps we need a little dumbing down to accommodate those not quite so perceptive. Or is it "dumming" down? Anyway, Jeremiah continues to proudly wear his family name on this book. $500.

I have not read the following book, but based on the title, I would say author James Janeway was a true expert at turning lemons into lemonade, or converting tragedy to triumph. The book title is A Token for Children: Being an Exact Account of the Conversion, Holy and Exemplary Lives, and Joyful Deaths of Several Young Children. This 1797 Elizabethtown, New Jersey, edition of a popular 17th century book was meant to inspire children. The young heroes and heroines, as young as five in these stories, live exemplary lives and face their impending deaths joyfully, being well-learned in scripture. Janeway believed younger children had a greater chance of reaching heaven, perhaps because they had less time to sin, so there was a certain joy, under this strange logic, to dying young. I'm sure the children reading this message must have felt inspired. Item 108. $1,800.