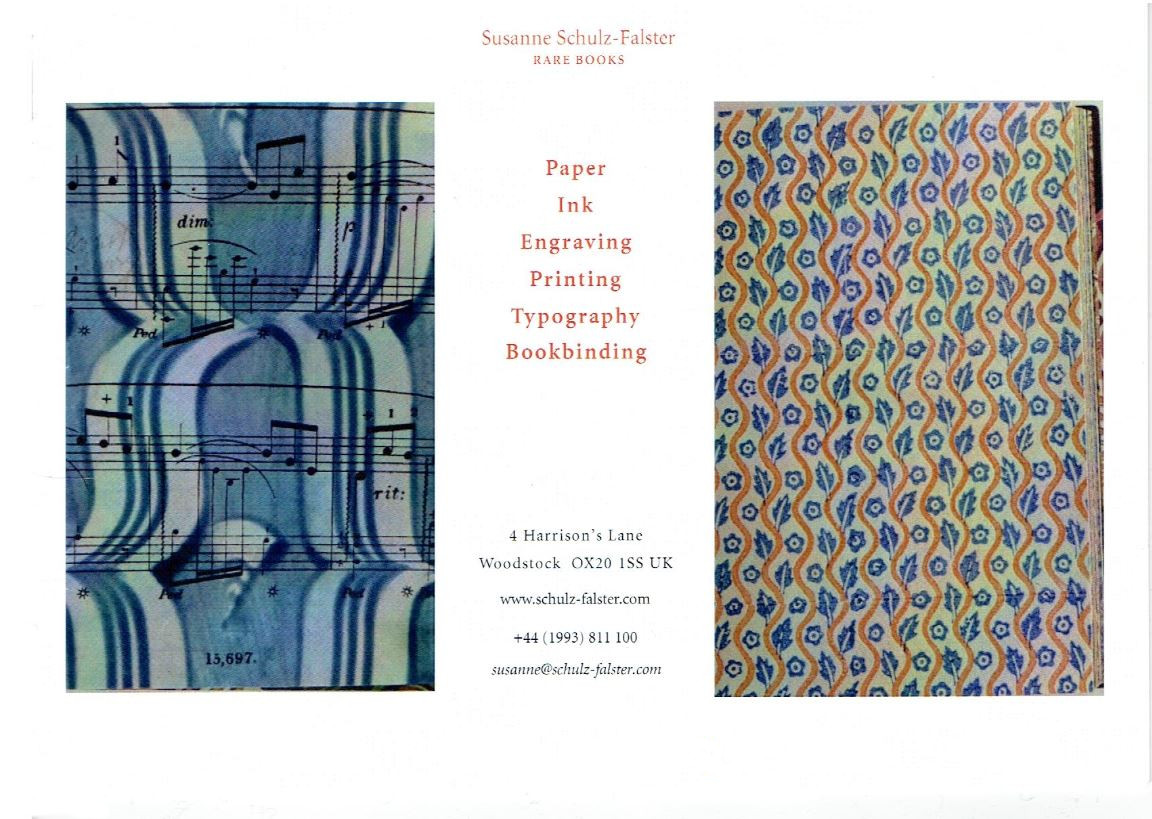 Susanne Schulz-Falster Rare Books has issued a new catalogue in what is generally referred to as “books about books” or the book arts. The title is Paper, Ink, Engraving, Printing, Typography, Bookbinding. Some are recent artistic creations; others from times long ago. There are numerous sample catalogues from those offering their wares to those who created books. Susanne Schulz-Falster hails from Woodstock, Oxfordshire, UK, perhaps not as well-known internationally as the American Woodstock but way, way older. Not surprisingly, much of the material is British in origin. Here are a few samples of the type of material you will find in this collection.

Would you like to know how to marble books? Wouldn't that be an amazing skill! Seriously, what books don't look better when they are marbled? It can make a bad book beautiful. The process involves placing marbling inks on a solution of thickened water called the “size” in a shallow tray. The ink floats on the thickened size. The inks, which can be of one or many colors, are then stirred or raked, whatever you want to create patterns on the surface of the size. Treated paper is then dipped on top of the size, picking up the color patterns, dried, and then used, most commonly for endpapers and covers of a book. The process dates back to 15th century Arabia but did not come into its own in Europe until the 19th century. Instructions may be found in this booklet, The Art of Marbling and Treatment of the New Bronze Colours. A Practical Guide to Marbling by Halfer's Method. Halfer was Josef Halfer who devised an improved method of marbling in the late 19th century. This is a second edition from 1904. Loosely inserted is Halfer's New Marbling Colours. The Normal Size. Two New Inventions of the Greatest Importance for the Art of Marbling (undated). This also includes 26 vibrant color samples of marbling ink. Halfer advanced the process by developing standardized bright colors, and an improved carragheen size that allowed for finer detail in marbling. He touts them here in publications with a marketing side to them. They were published by the Hostman Printing Ink Co. which sold Halfer's 26 colors of ink. Priced at £400 (British pounds, or approximately $493 in U. S. dollars).

This is not a typical type specimen book as those are used to sell types. This is a book displaying part of a most impressive collection of types. The title (in French) is Specimen des Types Divers de l'Imprimerie Nationale. Types Etrangers. It displays the various foreign types held by the Imprimerie Nationale. The Imprimerie Nationale (national printer) is the official government printer of France, for centuries having a monopoly on government printing. It has been around a while, founded in 1640 by Cardinal Richelieu at the request of King Louis XIII. Only in the past couple of decades has it become a commercial printer competing in the marketplace. The Imprimerie is known for its extensive collection of types. Schulz-Falster describes it by saying “the range is impressive: from Egyptian hieroglyphics, to various semitic alphabets, Indian alphabets, Chinese characters, not to mention five different versions of Arabic type (in different sizes), a wide variety of Greek characters, and many Latin text and display styles. In most cases the type designer is mentioned.” It was published in 1878. Loosely inserted is an autograph letter by its 19th century director, Barthelemy Haureau, to antiquarian James Darmesteter. £750 (US $926).

Here is a book about another state printing house, though the subject matter is quite different. The title is Personalstand der K. K. Hof und Staatsdruckerei, published in 1904. That translates to “the personnel levels of the court and state printing house,” the state being Austria. It was formed in 1804 by Emperor Franz I. This governmental printer was created because the private printers of the day all kept their prices high on government contracts. It employs a proto-Jurgendstil typography, Jurgendstil being the German term for Art Nouveau, a style that became very popular a few years after this book was published in 1904. What the book contains is a listing of all 1,684 employees of the state printing house at that time. It displays their name and date of employment. The names are arranged by job function, such as typesetter, lithographer, photographic specialist, woodcutter, letterpress and lithographic printer. Women workers are listed separately. £350 (US $432).

This next one is described as the “classic on the art of bookbinding.” The title is Bibliopegia; or, The Art of Bookbinding. In All Its Branches. This is an 1836 second edition of a book first published the preceding year. The stated author is John Andrews Arnett, but that was a pseudonym for John Hannett. He used his actual name in later editions. It is both a history of the art and a manual of bookbinding practices (as they existed in the early 19th century). It is particularly known as the first illustrated English book on bookbinding. It illustrated the equipment used and describes the techniques of the trade. £400 (US $493).

Here is an American book on bookbinding, actually the first American book on the topic. It also covers marbling and other bookmaking subjects. The title, which is also a good description, is A Manual of the Art of Bookbinding: Containing Full Instructions in the Different Branches of Forwarding, Gilding, and Finishing. Also, the Art of Marbling Book-Edges and Paper. The Whole Designed for the Practical Workman, the Amateur and the Book-Collector. The author was James B. Nicholson, the publication date 1856. Much of it was borrowed from Hannett's book, which the author acknowledges, but also contains many of his own contributions. In keeping with its subject matter, the book features gilt lettering on the spine and marbled edges and boards. £500 (US $617).