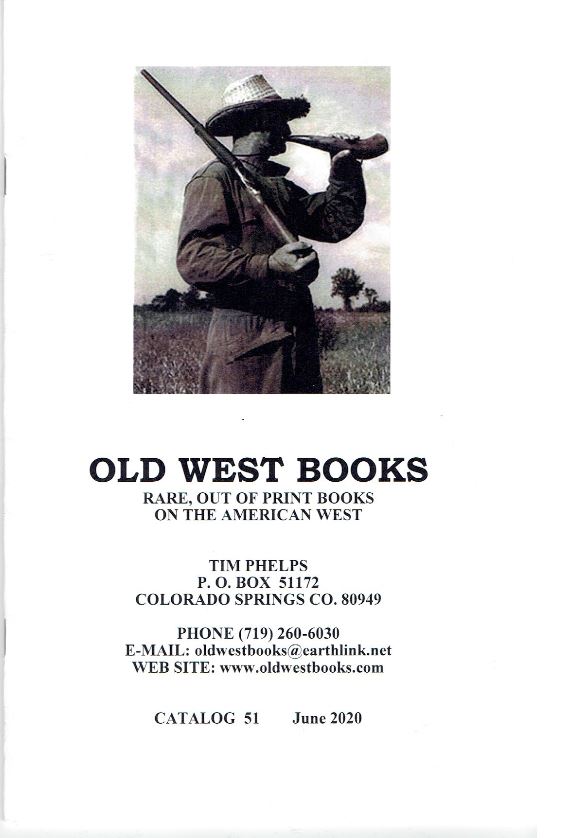 “May not be the best time to be putting out a catalog, but sitting around and waiting until things returned to normal seemed less appealing.” So does Tim Phelps introduce his latest Old West Books catalogue, and here's hoping this is a successful one. We need a little more of what Warren Harding called “normalcy.” Old West catalogues contain exactly the sort of material you would expect from a bookseller of that name. It is filled with items that will appeal to aficionados of the American West. Here are a few examples from their Catalog 51.

We will begin with one of the earliest descriptions of the West, before the American Revolution, when Americans had not yet set foot in most of that vast territory. We will give its very long title because that provides the best description of what is to be found in its pages: Three Years Travels through the Interior Parts of North America for more than Five Thousand Miles; containing an Account of the Great Lakes, and all the Lakes, Islands and Rivers, Cataracts, Mountains, Minerals, Soil, and Vegetable Productions of the North West Regions of that Vast Continent, with a Description of the Birds, Beasts, Reptiles, Insects and Fishes Peculiar to the Country. Together with a Concise History of the Genius, Manners and Customs of the Indians inhabiting the Lands that lie adjacent to the Heads and to the Westward of the Great River Mississippi. And an Appendix Describing the Uncultivated Parts of America that are the most proper for forming Settlements. The author was Jonathan Carver and his travels took place from 1766-1768. This is the 1796 Philadelphia edition of a book first published in London in 1778. Carver penetrated farther west than any American before, learning about the natural history and natives of what today would be described as the upper Midwest. He hoped to find a water route to the west coast, but didn't come close, discovering only a few tributaries of the Mississippi. Still, his journey sparked much curiosity in Americans that would later be fulfilled by Lewis and Clark. Item 22. Priced at $550.

Here is a booklet by a man better known for his skills with a gun than with a pen: The Tenderfoot's Turn, subtitled Whilom Sheriff of Dodge City, Famous Dead Shot in the Palmy Days of the Old Southwest, published in 1909 in, of all non-western places, Utica, New York. The author was William Barclay Masterson, and if that doesn't sound familiar, you know him better as “Bat.” Bat Masterson served as Sheriff of that legendary western town, and other positions in law, and as an army scout, buffalo hunter, and later as a professional gambler and journalist. You may not associate him with journalism, but for the last two decades of his life, he was a sports writer for a New York paper. He particularly reported on fist fights instead of gun fights. He loved boxing. Masterson writes about the art of the fast draw, and mentions several western notables such as Billy the Kid, Pat Garrett, Wild Bill Hickok, and Henry Plummer. He also had some advice extolling the virtues of a new gun. That explains Masterson writing this piece, and the publishing location of Utica. The booklet was published by the Savage Arms Company of Utica, whose straighter-shooting gun he was hired to promote. Claims Masterson, perhaps not objectively, of the Savage Automatic Pistol, “With a few minutes' practice a beginner can shoot it quicker and at the same time straighter than a six-shooter was ever shot by the cleverest gun expert the old frontier ever knew.” By the way, in case you didn't know (as I didn't) what a whilom sheriff is, “whilom” is an archaic word for “former.” Item 65. Priced at $650.

General George Armstrong Custer was a good soldier, but perhaps a better self-promoter. He already had a great reputation when things went so terribly wrong at Little Big Horn. Custer earned much sympathy at the time, but as the years went by, people questioned whether he was quite so good a general. He seemed to have gone off on a risky adventure on his own, and many men paid a heavy price. For over 50 years after his death, his widow, Elizabeth, devoted her life to salvaging his reputation. She was very good at it, but no one lives forever, not even Libbie Custer. After her death in 1933, there was no one in the family to carry on his legacy until many years later. George and Elizabeth had no children, so the job fell to the descendant of a brother. Item 24 is The Sacrificial Lion. George Armstrong Custer From American Hero to Media Villain. It was published in 1999. The author was Brice C. Custer, George's great grand nephew. At the time, he was George's closest living relative (Brice died in 2007). Brice was also a military man, flying airplanes for the Air Force and serving as a nuclear engineer at the Air Force Academy. George would have been amazed. Brice strongly defended Custer's reputation, perhaps influenced more by familial loyalty than total objectivity. This copy is signed by Brice Custer. $45.

Speaking of Gen. Custer, here is a really obscure related item. It is not the most thorough or original account, much of it cribbed according to Old West, but this is a part of a Custer collection you probably don't have. The title is A Soldier's Report of the Custer Massacre and the Battle of the Little Big Horn. It must be one of the last accounts by someone with a personal connection as it was published long after even Libbie Custer died, circa 1946. The author was John Henry Smith, a soldier with the Sixth Infantry protecting the Seventh Cavalry's supplies, when he heard about Custer's demise. At the time he was 17 years old, as of the writing, he was 87. He wrote about his experiences, but Old West tells us he relied “heavily on the magazine article of Colonel T. M. Coughlin.” Phelps notes, “This is the first copy I've seen.” He's seen a lot of Western material. Item 79. $240.

There are lots of historic accounts of the westward migration, but here is very personal and obscure one. It is also very human. Item 83 is How the Corey's Went west. Fifty Years in Crossing the Continent, by Permelia Corey Thomson, published in 1908. After a brief colonial times introduction, the story picks up in the middle of the 19th century with Rufus Corey. The family has moved from original housing in Connecticut to Pennsylvania where Rufus, as part of a search for a missing young woman, finds Patty. They marry, start up a farm on family property, and begin 50 years of hard work, little wealth, and Rufus' periodic calling to seek better fortune by moving farther west. They have a family, a wonderful relationship, and poverty. The first move is to a better farm farther west, but still in Pennsylvania. After years of struggle, they pick up and move again, this time to Wisconsin. Life isn't easy but good, until Patty gets smallpox. Like most so inflicted, she dies. The children now grown, Rufus and a daughter move to Nebraska, at least not having to pull a wagon (there is now a train). After years there and a brutal winter, Rufus, now old and frail, decides on one more move west. It is off to California, and his remaining years in San Diego, where it is cool but not cold, and life gentle on an old man. $1,250.