The Latest from Whitmore Rare Books 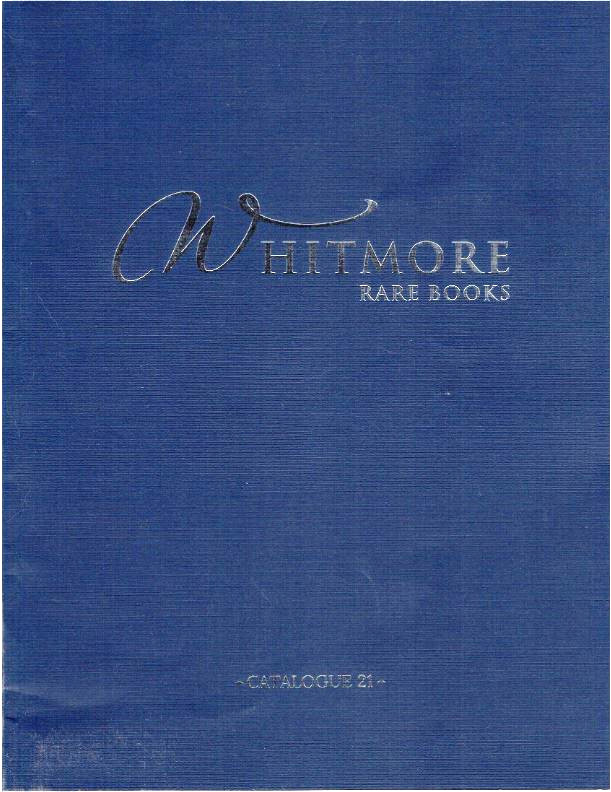 Whitmore Rare Books has issued a new printed catalogue in a time when such catalogues have become scarce. This one is their Catalogue 21. Whitmore offers a variety of books - fiction, nonfiction, many different topics. Perhaps that is why they limited the title to the catalogue number, anything more specific would be insufficiently inclusive. We can say that the material is highly collectible, filled with authors and books you know in first or early editions and excellent condition. They will fit well in the finest of collections. Here are a few samples.

Would you like to know what the future holds? Most of us are certainly curious, especially in trying times like these when we want to know when it will again be safe to emerge from our cocoons. Well, it's all here; you just need to know how to interpret it. Item 45 is The True Prophesies or Prognostications of Michael Nostradamus, Physician to Henry II, Francis II, and Charles IX, Kings of France, and one of the best Astronomers that ever were. A Work full of Curiosity and Learning. This is the first English language edition, published in 1672 (it was first published in 1555, so English speakers were in the dark about the future for over a century). Nostradamus was a physician, astrologer and seer. He had studied the ancient Hebrew prophets of the bible and presumably saw himself in their line. He tended to see disasters, the floods, earthquakes, wars, and such, in keeping with the prophets of the bible. His book probably won't help you judge the direction of the stock market or pick the right lottery numbers. It has been almost five centuries since Nostradamus walked this earth but he still has legions of followers who look to his work to see the future. It is said he predicted all sort of events that came to be, the French Revolution, world wars, the atomic bomb. The problem with his prophesies is that they seem to be best recognized through hindsight, not of much use in foreseeing the future. Vagueness is helpful for a prophet's reputation. Priced at $18,000.

Samuel Clemens was a riverboat pilot turned obscure journalist until a frog jumped into his life. Then, he quickly became Mark Twain, perhaps America's greatest writer ever. He had penned a story about a frog that people enjoyed, so it became the protagonist of his first book, The Celebrated Jumping Frog of Calaveras County and Other Sketches, published in 1867. It is a story about an old miner who would bet on anything. He had a frog and bets with a stranger that it can out jump any other frog. Since the stranger doesn't have a frog, the miner goes off and finds him one. While gone, the stranger feeds the miner's frog a handful of lead shot. You can guess the outcome. By the time the miner figures out why his frog can't jump, the stranger is gone. The story became as celebrated as the frog, and soon enough, so did Twain. Item 61. $39,500.

Edward Emerson Barnard is known as one of the greatest observational astronomers, though he came from inauspicious roots when he became interested in the field during the 1870s. Barnard's father died before he was born, with his impoverished mother left to raise him during the Civil War. The result was that Barnard had practically no education and was forced to take a job in a photography shop as a young man to survive. His knowledge of photography and lenses led to an interest in astronomy and his purchase of a telescope that cost him two-thirds of his annual salary. With his keen eye, he discovered several comets and the fifth moon of Jupiter. This led to his studying at Vanderbilt University and eventually a position at the Yerkes Observatory. Barnard also became interested in photographing the Milky Way, and over the course on his life took thousands of photographs. Barnard died in 1923, but with the aid of a niece, this book was published in 1927: A Photographic Atlas of Selected Regions of the Milky Way. It comes in two volumes and contains 51 black and white linen-backed silver prints. Item 6. $8,500.

Among the great philosophers is... Andy Warhol? I'm not sure he did much for philosophy, though he was very good for the Campbell's Soup Company. But, here he is expounding on his deepest thoughts in The Philosophy of Andy Warhol (From A to B and Back Again). I'm not sure how deep his thoughts were. I always felt Andy was pulling our leg. Topics include fame, success, love, beauty, sex, death, economics, and art. It has been said that his secretary did most of the writing but I don't know. Item 64 is a 1975 first edition, inscribed to “Randy” and signed Andy Warhol. It has a roughly drawn outline of a Campbell's tomato soup can. Actually, every copy I've seen of this book is inscribed to someone and contains his famous soup can. Andy never forgot from whence he came. $2,500.

Here is another inscribed book from a person better known for her art than her writing. The title is Grapefruit by Yoko Ono. The book was originally published in 1964, but this is a “first thus” edition published in 1971. In between those editions, she married John Lennon, which did for her career what Campbell's Soup did for Warhol's. It describes her conceptual approach to art. This copy is inscribed to “Paul,” but before you get your hopes up, Whitmore cautions, “we assume not McCartney.” Item 46. $2,500.

Sometimes we are rewarded for our generosity towards others, other times, we are taken advantage of. Thidwick the moose is an example of the latter. Thidwick was born in the imagination of the very imaginative Dr. Seuss. Item 51 is an inscribed copy of Thidwick: The Big-Hearted Moose, published in 1948. This copy contains a hand-drawing of some sort of Seussian bird carrying a “Merry Xmas” sign for the presumably young recipient, “Judy.” Thidwick allows a bug to hitch a ride on his antlers. The bug quickly shows his lack of gratitude by inviting lots of other animals to join him in what has become his home. Thidwick's burden becomes greater and greater, but he is too kind to evict the critters. When winter comes, and the other moose cross the lake for better grazing grounds, his tenants insist they stay where they are as they prefer this side of the lake. Thidwick gives in. Finally, hunters arrive, and Thidwick's hunger and burden slow him down too much to escape. At the last minute, Thidwick remembers it is time to shed his antlers, which he does and swims to the other side of the lake, leaving his “guests” behind. The hunters take the antlers and their inhabitants home as a trophy. There have been numerous analyses of the meaning of this tale, as perhaps being a critique on social welfare, immigration, property vs. squatters rights and such. Better to just let the kids enjoy yet another wonderful Seuss tale. $3,500.