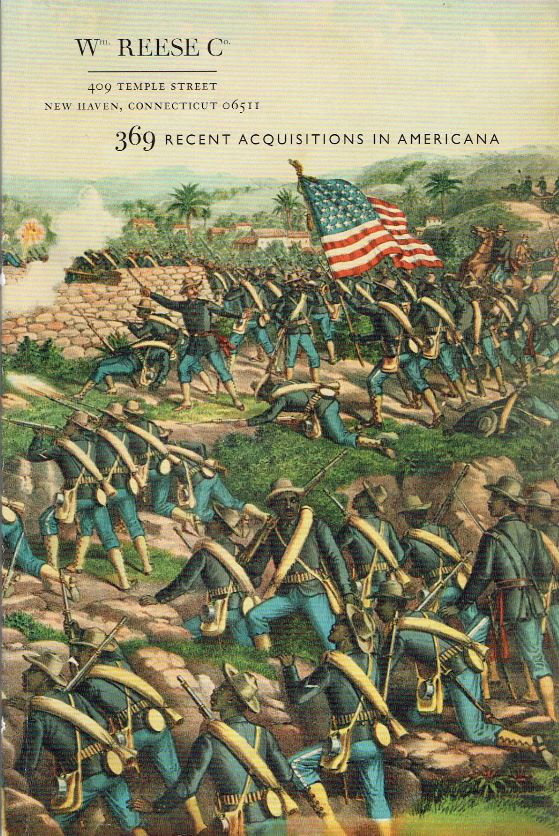 The William Reese Company has issued a catalogue of Recent Acquisitions in Americana. The acquisitions may be recent, but the books and other documents are not. They range from the 16th century to the 19th. Many are well-known and highly important, others more obscure but no less interesting. This catalogue offers an excellent selection of material for those who collect the best in Americana. Here are a few of the items offered.

During colonial times, or even those of the Revolution, America was not known for its great scientists... but then there was Benjamin Franklin. Most may associate Franklin with the cause of American independence, a strong voice both at home and in Europe for America. Of course, he is also well-known as one America's foremost printers and for his almanacs. But, Franklin's knowledge seemed to know no bounds. He was the definition of a polymath. His most notable scientific experiments and discoveries came with electricity. Probably everyone in America is familiar with his kite and key experiment, where he established that lightening was actually electricity. However, his studies of electricity went far beyond this, and he expounds on his theories and experiments in his greatest scientific work, Experiments and Observations on Electricity, made at Philadelphia in America... While first editions are usually most desirable, this is a fourth edition and this is a case where a later edition truly is the “best.” The first edition of 1751 and following ones were far less complete than this 1769 fourth edition. It includes all of Franklin's experiments with electricity along with investigations on other subjects such as meteorology. To this he has added his correspondence with other experts, his philosophical papers, and footnotes and an index. Additionally, he carefully edited this edition, correcting errors made in previous ones. This copy includes the errata/advertising leaf often missing. Item 57. Priced at $45,000.

The image on the cover of this catalogue comes from a remarkable print showing a little known side of a decisive battle from the Spanish-American War. It is of the Battle of San Juan Hill, which brandished the reputation of Theodore Roosevelt, leading to his selection as Vice-President which in turn led to his becoming President. Roosevelt put together a volunteer cavalry unit, known as the “Rough Riders,” who fought bravely at San Juan Hill. However, they were one of just many units who fought gallantly to bring about the American success. What you see in this image are some of the “Buffalo Soldiers,” African American units that represented their country with equal valor. The caption on this 1899 Kurz & Allison (Chicago) print explains it best – Charge of the 24th and 25th Colored Infantry and Rescue of Rough Riders at San Juan Hill, July 2nd, 1899. Item 115. $1,750.

Here is another image, a pictorial letter sheet from Gold Rush era San Francisco. It, too, displays a couple of dead bodies, but this was a different sort of battle. The authorities had limited control of crime in the rapidly growing city, allowing a group known as the ”Sydney Ducks” too much free reign. They were convicts who emigrated from Australia who were active in robberies and arson. When authorities could not control them, the citizens took the law into their own hands. They formed the “Vigilance Committee” which meted out its own form of justice. In this case, two “Ducks,” Samuel Whittaker and Robert McKenzie, were captured by the Vigilance Committee in Sacramento, tried by them on August 20, 1851, and sentenced to hang in San Francisco. They were taken to that city, but the two “Ducks” were rescued by the Sheriff and placed in jail three days later. That was not sufficient for the Vigilance Committee. On August 24, they stormed the jail, took the prisoners to their headquarters, and hanged them from the second story of their building. That is the event depicted in this sheet, the two hanging from the building while a large crowd mills around in front. The caption title reads, Tremendous Excitement! Samuel Whittaker and Robert McKenzie Rescued from the Authorities, and Hung by the Vigilance Committee, on Sunday August 24th at 3 O'clock P.M. Item 27. $1,500.

Next are the memoirs of a lawyer and later Governor of Virginia who went to war during the American Revolution. His name was Henry Lee (actually Henry Lee III), of the famous Virginia Lee family, but he was better known as “Light Horse Harry” for his skilled service in the cavalry. He earned George Washington's deep respect and friendship and became one of the former's closest associates. Washington called on Lee to put down the Whiskey Rebellion, a great threat to the authority of the federal government in 1794. When Washington died, Congress asked Lee to deliver the eulogy for his friend. It was there that Lee delivered the immortal words describing Washington – “first in war, first in peace, and first in the hearts of his countrymen.” Unfortunately, Lee experienced financial reverses later in life and spent a year in debtor's prison. He wrote his memoirs while in prison to help pay off his debt and published them in 1812. However, this is a much later edition, published in 1869. It also contains a biography by his son, who ironically tried to break up the country that Light Horse Harry fought to create. That son was Robert E. Lee, and if it seems surprising that the son of a Revolutionary War hero would be a major figure in the Civil War, 80 years later, it is because Robert E. was Henry Lee's eighth child, born after he was 50 years old. The title of this book is Memoirs of the War in the Southern Department of the United States... A New Edition, with Revisions, and a Biography of the Author, by Robert E. Lee. This is a large paper copy of this edition and is signed by Robert E. Lee. Item 87. $5,000.

Item 83 is an 18th century classic of North American natural history and culture, though it was not published in English until later. The author was Peter Kalm, a Fin, but he was sent to North America by the Swedish Royal Academy of Sciences at the behest of his professor and friend, the noted Swedish botanist Carl Linnaeus. He was sent there primarily to collect seeds and plants that might be useful for agriculture in Sweden. He stayed for four years, from 1748-1751. He arrived in Philadelphia where he met with America's notable scientist, Benjamin Franklin. He then proceeded to the Swedish colonies of southern New Jersey and Delaware, took up residence as a pastor, and married the widow of the former pastor. Along with his botanical descriptions, he also writes of these colonies, and of the culture and religion of the Americans. From there he traveled north, Trenton, New York, Albany, Niagara Falls, Montreal, and Quebec. There is a folding view of Cohoes Falls near Albany, the second largest falls in New York after Niagara. Item 83 is the first and only complete edition of Kalm's work, published in the original Swedish, En Resa Til Norra America... It was published in three volumes, 1753, 1756 and 1761. $8,500.