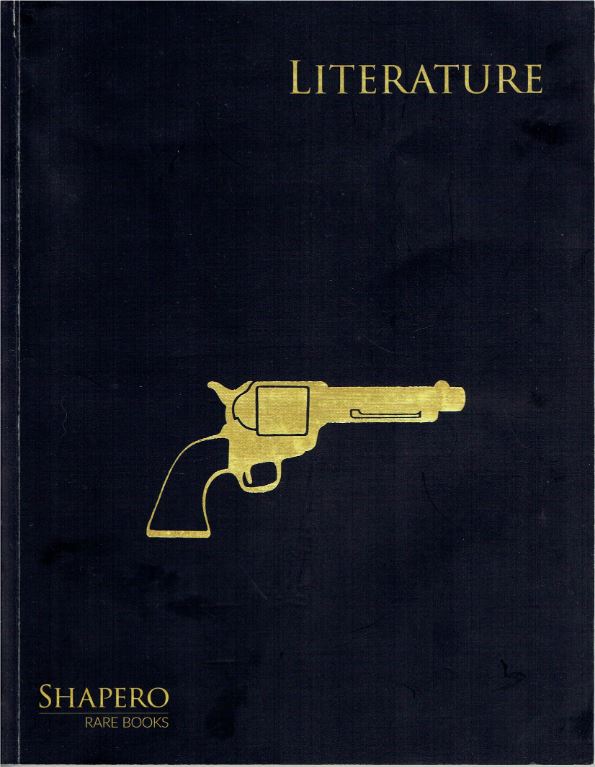 Shapero Rare Books has issued a catalogue titled, simply, Literature. Since that is a fairly broad swath, they have provided a table of contents to be more specific. Those categories are: Antiquarian; Literary Sets; Private Press & Limited Editions; 19th Century Literature; Detective, Thriller & Spy Fiction; Horror, Gothic & Supernatural; Fantasy & Science Fiction; Children's Literature; and Modern Literature. These are a few of the literary masterpieces to be found in this collection.

I'm not sure whether this constitutes a book review, but Pennsylvania Supreme Court Justice Michael Musmanno wrote that it is “...not a book. It is a cesspool, an open sewer, a pit of putrefaction, a slimy gathering of all that is rotten in the debris of human depravity.” If that doesn't make you want to read it, I don't know what will. The book is Tropic of Cancer by Henry Miller, and it proved to be a landmark in terms of obscenity and book censorship in America in the 1960s. To put it another way, it resulted in a landmark case concerning freedom of speech. First published in France in 1934, where moral standards were not so uptight as in America or the English-speaking world in general, it was quickly banned in the United States. Miller spoke too freely about sexual encounters for the American morality police. Finally, almost three decades later, an American publisher decided it was time to test the rules in America. The Grove Press published the book only to be immediately sued in jurisdictions all over the country. The above quote came from a verdict that it was obscene by the high court of Pennsylvania. The publishers took the case all the way to the U.S. Supreme Court where they won, the court ruling it was not obscene by a 5-4 majority. Even then, the majority of justices could not agree on why they so concluded. Citing their opinion in a companion case the same day concerning an allegedly obscene film, two Justices overturned on the grounds that to be obscene, the material must be “utterly without redeeming social importance,” two Justices said that such censorship is always unconstitutional, and a fifth Justice, Potter Stewart, overturned the conviction based on one of the most remembered lines ever issued is a Supreme Court case. Wrote Stewart, only hard-core pornography could be banned, and as to how he determined whether this was such pornography, he wrote, “I know it when I see it.” He did not see it in Tropic of Cancer. Item 260 is a copy of the first American edition from Grove Press, but it is not an ordinary copy. It is one of 100 specially bound copies signed by Miller. Priced at £1,950 (British pounds, or approximately $2,544 in U.S. dollars).

This is a piece of detective mystery fiction from a most unlikely source. Actually, it shouldn't be. The author was A. A. Milne, and if you associate him with anything other than Winnie-the-Pooh and children's books, than you know him better than most. The reality is Milne had been writing for two decades before he penned a story for children. He made numerous contributions to his employer, the humorous periodical Punch, after graduating college. He then published 18 plays and three novels before Winnie was “born.” This is one of them – The Red House Mystery. It is one of a sealed house, a cast of characters trapped in a place where one is murdered. The mystery is whodunnit. It was published in 1922. The first of his children's books came two years later. Once the fourth of the Pooh books was completed in 1928, Milne went back to writing other sorts of material. Still, the success and popularity of the Pooh books is such that most people know Milne only for this part of his writing career. Item 127. £9,500. (US $12,417).

There were 14 books written by Ian Fleming featuring secret agent James Bond, and they were among the most popular and successful of this sort of story. Still, on their own, James Bond would not be the legendary, though fictional character he is. This is why this book, the sixth in the James Bond series, is the most significant. Item 105 is a first edition, first impression in a second state binding of Dr. No, published in 1958. This one is set in Jamaica, where Fleming went to write it. The villain in this novel is Dr. No, an improbable character, but ordinary bad guys was not the stuff of Bond novels. They had to be spectacularly evil. The reason that Bond is such a legend today, and such an incredibly lucrative franchise, is because of the film adaptations of his character. Starting in the 1960s with Sean Connery in the lead roll, the films continue to roll out with more actors now having portrayed Bond than I can recall. However, it was Dr. No that started it all. Though the sixth Bond story, it was the first turned into film, and its success led to all that has followed. £2,250 (US $2,955).

This is a work of science fiction, an invasion by aliens whose weapon to destroy mankind sounds eerily similar to what we are doing to ourselves today. The title is The Kraken Wakes by John Wyndham, published in 1953. In it, unseen aliens land on Earth, but not in the usual location. They appear to have come from a giant planet where the stronger gravitational pull results in higher pressure. As a result, rather than settling down on land, the aliens go to the place where pressure is highest. They colonize the bottom of the ocean at its lowest depths. You might think the two species could coexist since there is little interaction between these locations, but problems occurred, and the aliens at times attack humans on the sea or along the coast. Humans, in turn, unsuccessfully try to bomb the ocean depths. Ultimately, and ironically considering what we are doing to ourselves, the aliens attack by melting the polar ice caps. The resulting water raises the oceans and inundates much of the earth's surface. Most of mankind is wiped out before humans finally develop an ultrasonic weapon that destroys the aliens at the bottom of the sea. Item 163 is a first edition, first impression of this cautionary tale. £550 (US $723).

One good underwater tale deserves another. Next up is Twenty Thousand Leagues Under the Sea, an adventure classic by Jules Verne. Originally published in French in 1871, this is a true first English edition, first impression, published in 1873. It's the story of three men who search for a reputed sea monster, only to discover it is a submarine. You will immediately see that this is a futuristic work of science fiction as submarines were new and primitive in 1873. This one possesses capabilities well beyond those extant in 1873. Unable to leave, the three travel around in this submarine manned by a captain escaping land-based governments. It is a look at the worlds, some real, some fictional, as exist under the oceans. Item 63. £16,500 (US $21,620).