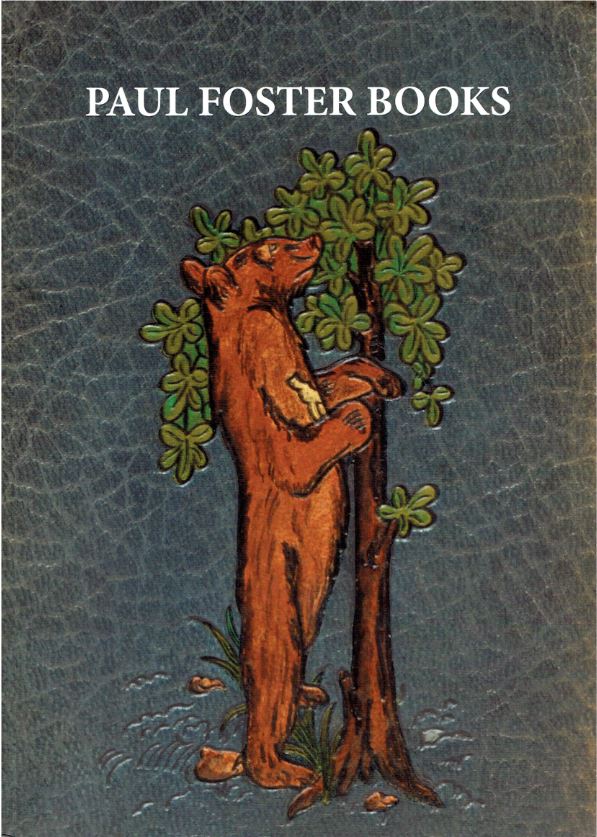 This catalogue reflects a special achievement for Paul Foster Books of the Chiswick District of London. It is the 30th anniversary of Mr. Foster setting out on his own as a bookseller. He had previously worked in other firms, but in 1990 established the business that celebrates its anniversary today. We won't try to categorize the material in this catalogue as that is hard to do. There is much in the way of literary fiction, but then again, there is a whole group of books by Winston Churchill. Churchill did once try his hand at a novel, but wisely returned to writing history. We will present a few selections from this catalogue which hopefully will provide some direction as to what you can find.

Here is one of those history books written by Churchill, but unlike most, this one doesn't describe events in his own homeland. Rather, it is a book about The American Civil War. He began writing it in 1939 but events intervened to make him put it down. He had to lead his nation through what looked to be a lost cause against Germany in the early days of World War II, but unlike the Southern Confederacy, it proved not to be a lost cause after all. This book was originally a section of Churchill's four-volume A History of the English Speaking Peoples, published in 1958, but this is a separate publishing of just this section, from 1961. Churchill has his own views on the competencies of leaders North and South which may not jibe with most American historians. Perhaps with all of the topics about which he wrote, many of which he experienced, knowledge of the American Civil War was not his strongest suit, but then again, unlike most American historians, he had no preconceived favoritism to one side or the other from his vantage point across the sea. Item 32. Priced at £525 (British pounds, or approximately $671 in U.S. dollars).

Churchill was an excellent historian, but he was at his best when he was making history. His role in saving Britain and the rest of the world during World War II needs no explanation. At one time, Britain took on its enormously powerful foes alone. Here is a speech of his from those darkest of days, A Speech by the Prime Minister...in the House of Commons, August 20th 1940, published that same year. This was the time of the Battle of Britain, when Germany's air force attacked targets in the U.K., military, transport, manufacturing, and civilian, by air to spread destruction and terror. The Germans believed they could pound Britain into submission, either to sue for peace, outright surrender, or so weaken their defenses that they could attack by sea. Churchill would not yield, and the Royal Air Force did a spectacular job of defending the homeland despite the odds. It was during this speech that Churchill, speaking of the Royal Air Force, delivered this line that has gone down in history: “Never in the field of human conflict was so much owed by so many to so few.” The “few” were those airmen, who became known forever to their countrymen as “the few.” Item 38. £750 (US $961).

Next we have Across the River and into the Trees, by Ernest Hemingway, published in 1950. This is a presentation issue which preceded the first U.S. edition. It is one of just 24 copies, in dark blue buckram with gilt lettering on the spine, with Hemingway's signature reproduced in gilt on the front board. No dust jacket was supplied with this issue. It has a tipped in list of errors in the book with a signed note from Charles Scribner. Based on the timing, I believe this must have been the third of four Charles Scribners who ran publisher Charles Scribner's Sons. He was a close friend as well as publisher of Hemingway. Scribner's handwritten, signed note reads, “This is one of 24 copies, bound in a different cloth from the regular edition and has the above errors in the pages which were caught and corrected after 24 sheets had been run. Hemingway and I have given these 24 copies to friends – none were sold. - Charles Scribner.” Item 77. £9,500 (US $12,184).

This is a book that any serious book collector will surely appreciate. The title is Slightly Foxed – But Still Desirable. Ronald Searle's wicked world of book collecting, published in 1989. Searle weighs in on the obscure world of terms used by booksellers in their catalogues and gives them new meanings. He provides both illustrations of their meanings along with a glossary of terms. Of course, the humorous Mr. Searle's meanings are not the same as those of booksellers, but they are just as logical. For example, the title is accompanied by an image of a beautiful lady with the tail of a fox. She is, so to speak, “slightly foxed but still desirable.” You can imagine his image of the lady who goes with the expression “generally a little loose.” This is from the Souvenir edition of 150 signed and numbered copies. It contains 60 full-page colored plates of Searle's illustrations. Item 155. £600 (US $768).

This one isn't really a book, but it sure could fool you. Item 13 is a book box, or faux books. It is actually a carrying case including certain survival tools designed to look like two old books stacked next to each other. The tools it houses are a compass, windproof lighter, folding knife, drinking glass, and small bottle. On the outside, the “books” show the “usual wear,” that is, they are made to look like old books so as to be inconspicuous. It was made by Jagermeister in Germany circa 1938-1950. Item 13. £1,500 (US $1,921).

Paul Foster Books may be reached at (+44) 020 8876 7424 or paulfosterbooks@btinternet.com. Their website is found at www.paulfosterbooks.com.