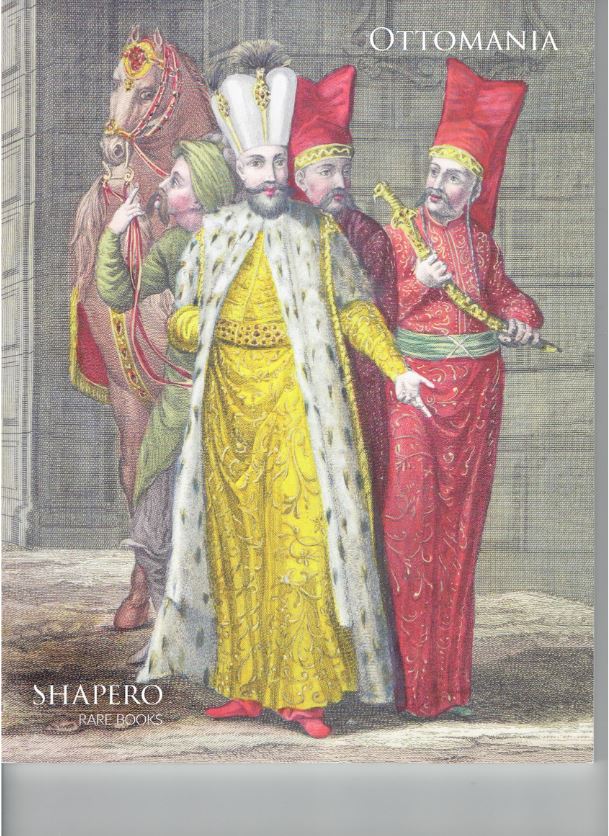 Shapero Rare Books has issued a catalogue on Ottomania. My spell check doesn't recognize that word but what does it know? It doesn't refer to Crazy Otto, but rather, a part of the world. The subtitle explains, Travels through the Levant and the Middle East. It is the old Ottoman Empire. The Ottoman Empire lasted for more than seven centuries, headquartered in today's Turkey. At its peak, it extended from southwestern Europe through Persia, Arabia and the Middle East and all across North Africa. However, all good things come to an end. The Arabs revolted, the Turks revolted, and after World War I the empire was no longer sustainable. The empire was dissolved in 1922. Here are a few of the works included in this catalogue.

Egypt spent centuries under the control of the Ottoman Empire, at least to the extent they were able to control that somewhat far off land. However, late in the 18th century, Napoleon determined he wanted to increase France's influence in Egypt. Much of his reasoning involved making it more difficult for Britain to have easy access to India but Napoleon also wanted to seal his own reputation as a military commander, he having designs on gaining power over France himself. As even the Ottomans discovered, controlling Egypt was not easy. The local population would only tolerate so much outside interference. Along with rebellious locals, the Ottomans acted military against French interference and were joined by the British, who sought to limit France's influence. Napoleon achieved several victories, but unrelenting opposition eventually proved too much. He decided to hightail it back home in 1801, leaving others to be around for the defeat. Despite a less than stellar outcome, Napoleon still managed to gather support back in France and soon would become emperor anyway. Here is an account of that war from the British point of view: History of the British Expedition to Egypt to which is subjoined a Sketch of the Present State of that Country and its Means of Defense. The author was Robert Thomas Wilson, the book published in 1802. The British would have many more battles with Napoleon in the years ahead until finally subduing him at Waterloo in 1815. This copy bares the bookplate of the Porkington Library, and while that may sound funny today, Porkington was the prestigious estate of 19th century MP William Ormsby-Gore. Item 133. Priced at £1,250 (British pounds or approximately $1,602 in U.S. dollars).

Bonaparte's military mission failed, but his temporary occupation of Egypt did result in something very useful. Napoleon determined to learn everything about Egypt, from its history, natural history, culture, arts, everything imaginable. He sent in a team of scientists and others to create a comprehensive report of what they found. That they did and it took many years to complete their report, long after the French were forced out and even until after Napoleon himself met his Waterloo. Item 42 is a copy of that extensive report, published in parts from 1809-1822, Commission des Sciences et Arts d'Egypt, edited by Vivant Denon. This was not so much an intellectual exercise by Napoleon. He planned on colonizing Egypt so he wanted to know everything about the country in advance to expedite the process. However, even with that cause long gone, Napoleon still encouraged the report's publication. This first edition is complete in 20 volumes. £225,000 (US $288,465).

One site that Napoleon's researchers missed was the most intact tomb of the Pharaohs, that of Tutankhamen. That is understandable. No one discovered it until 1922. Item 31 is the story of that discovery, The Tomb of Tut-Ankh-Amen Discovered by the Late Earl of Carnarvon and Howard Carter, published in 1923. It was written by Carter and his assistant, A. C. Mace (who did most of the writing). Howard Carter first went to Egypt to search old ruins in 1891, and his abilities earned him an appointment as a chief inspector in 1899, despite no formal training. Carter got into some difficulties with the antiquities service and resigned in 1905, but in 1909, he struck up a friendship with the Earl of Carnarvon. The Earl possessed two critical attributes – a deep interest in Egyptian antiquities and a lot of money. He financed Carter's missions. Unfortunately, Carter's excavations did not find much of great significance, and the costs were becoming burdensome. Nevertheless, he convinced Carnarvon to fund one more excavation in 1922. This was the one that struck the mother lode. After meticulously working his way through the tomb, taking months to be sure to preserve everything he found, Carter reached the burial chamber and found the King's body on February 16, 1923. His patron, Carnarvon, got to share in the discovery too, but died less than two months later. That slowed Carter's further progress, but working with care and attention to detail, he spent the next ten years excavating the tomb and accounting for everything he found. Item 31. £3,000 (US $3,846).

Item 9 is The Nestorians and their Rituals: with the narrative of a mission to Mesopotamia and Coordistan in 1842-44, by Rev. George Percy Badger, published in 1852. The Anglicans were fascinated by the Nestorians, sometimes called the Church of the East, in the 19th century. The Nestorians were followers of Nestorius, a fifth century Christian theologian who served as Bishop of Constantinople. He split with the main church over theological differences I wouldn't pretend to fully understand and he and his followers moved east, to Persia, and some even farther east, as far as China. As such, they became isolated from the rest of Christendom, Christians living in the non-Christian world. This explains the Anglican fascination with them. Badger was sent by the Archbishop of Canterbury to meet with the eastern churches, particularly in Kurdistan. £1,250 (US $1,602).

Next we have what Shapero calls “a landmark in the history of the photobooks.” The photographs are of Egypt, Nubia, Palestine and Syria. What makes this photobook remarkable is the timing. It was published in 1852, the photographs taken from 1849-1851. That was very early in the development of photography. This book contains 125 salt prints of these very early photographs from the Middle East. The title is Vues en Egypte, Nubie, Palestine et Syrie. The photographer was Maxime du Camp. He was sent to the region by the French Ministry of Education. Du Camp was an untrained, or self-trained photographer. Rather than romanticizing the sights he saw, his pictures are stark, more science than art. This is what he saw. Du Camp was accompanied on his journey by French novelist Gustave Flaubert, but what contributions Flaubert may have made is unknown. Item 47. £300,000 (US $384,592).