Items Taken to the California Fair by the William Reese Company 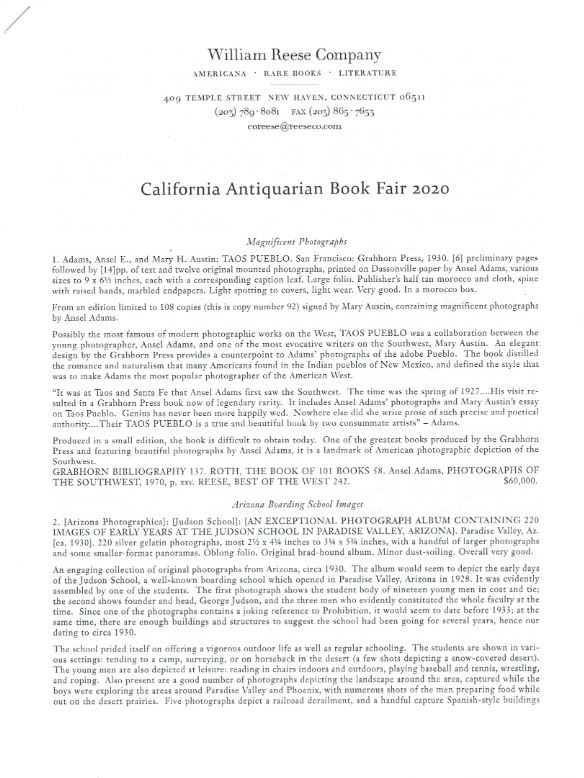 Books from the California Fair.

The William Reese Company prepared a list of materials they took to the recent California Antiquarian Book Fair. These lists, not surprisingly, are not targeted to a particular field since all sorts of collectors are likely to show up at a fair. However, you can expect that it will include some of their finer material as that is what a bookseller would want to display. Here are a few selections of what made the journey from Connecticut to California.

This is an official report on a disaster that occurred over a century ago, and yet the story is still fresh in our minds. Hollywood films can do that. Item 115 is the Report of a Formal Investigation into the Circumstances Attending the Foundering on 15th April, 1912, of the British Steamship “Titanic” of Liverpool, after Striking Ice, published in 1912. The unsinkable ship was on her maiden voyage across the ocean from England to New York when she struck an iceberg. Unsinkable she was not. The report states that water rushed in on account of the damage so fast “the ship's pumps could not possibly have coped, so that the damage done to these five compartments alone inevitably sealed the doom of the ship.” Of the believed 2,224 people on board, 1,500 died. They needed more lifeboats, but that was only part of the problem. The report states, “The real difficulty in dealing with the question of the boats is to find the explanation of so many of them leaving the ship with comparatively few persons in them.” The report notes that women and children had the highest survival rate, first and second class passengers fared better than those in steerage. However, the report says those in steerage were not treated unfairly. Those who spoke English did better than those who did not, which the report attributes to their being better able to understand instructions. Perhaps. Priced at $2,750.

These gentlemen fared better than the 1,500 people who went down with the Titanic. Rather than prematurely curtailed lives, they experienced the exact opposite. This was during the Civil War and the Rev. Elias B. Hillard wanted to stir up those old sentiments of patriotic support for the Union that existed at the time of the Revolution. So, he went out looking for surviving veterans of the American Revolution. Of course, since that war had ended 80 years earlier, there weren't many still around. He managed to find six. Hillard went to visit the veterans, photographed these men now near or over 100 years old, wrote down their stories, and published a book. Its title is The Last Men of the Revolution. A Photograph of Each From Life, Together with Views of Their Homes Printed in Colors. Accompanied by Brief Biographical Sketches of the Men. The men photographed were Samuel Downing, Daniel Waldo, Lemuel Cook, Alexander Millener, William Hutchings, and Adam Link. Unphotographed was James Barham, who he could not find, but surmised was alive as there was no notice of his death. The book was published in 1864, and the following year the Union triumphed, though it's unlikely this book had much to do with that. None of these men had long to go. The last of them, Lemuel Cook, died in 1866 at the age of 107. Missing from the list was the last survivor of the Revolution, Daniel Frederick Bakeman. Bakeman was missed because he had not applied for a pension. Bakeman died in 1869 at age 109. Item 52. $7,500.

In the days of the California Gold Rush, there weren't a lot of lawmen around to protect the influx of miners. The result is that in some mining towns, the miners themselves set down the “laws” by which miners were expected to live. Item 18 is a broadside of Columbia Mining Laws, printed in 1853. Mining laws pertained to issues concerning mines, rather than trying to set up a justice system for all sorts of wrongdoing. The Columbia laws consist of 17 articles, mostly dealing with making and operating claims. A few are less than generous. Article 10 states that “None but Americans and Europeans who have or shall declare their intentions to become citizens, shall hold claims in this district.” Article 11 provides, “Neither Asiatics nor South Sea Islanders shall be allowed to mine in this district, either for themselves or for others.” Article 12 provides for punishment to a miner who sells a claim to an Asian or Polynesian. $6,500.

Here is an obscurity by the author of Alice in Wonderland, Lewis Carroll. Actually, that was just the pen name he used for his fantastic stories. In the real world, he was Charles Dodgson, a studious mathematician. In this role, he used his actual name, not the Alice one. Item 32 is Lawn Tennis Tournaments. The True Method of Assigning Prizes with a Proof of the Fallacy of the Present Method, published in 1883. This was not a bestseller like the Alice books. It is in fact quite an obscurity. Reese explains that the ephemeral nature of the piece “and the impractical nature of the method outlined” relegated the work to obscurity. $7,500.

Next we have the first printed account of man's entry into the Antarctic Circle. Item 67 is Journal of the Resolution's Voyage, in 1772, 1773, 1774, and 1775. On Discovery to the Southern Hemisphere, by which the Non Existence of an Undiscovered Continent...Is Demonstrably Proved. The author was John Marra, a gunner's mate on the Resolution on Captain James Cook's second voyage. No one was permitted to publish an account of this journey prior to the official account, but Marra jumped the gun by 18 months to get his account before the public sooner. He published his book anonymously, but it was not hard for Cook to figure out who the author was. At the time, most people believed there was a massive southern continent surrounding the South Pole, far bigger than the Antarctica that actually exists. Cook crossed the Antarctic Circle, penetrating deeply into what was expected to be land, but still there was nothing but sea. Hence, the title saying the non existence of such a continent was demonstrably proved. Marra's jumping the gun book became the first printed account describing the Antarctic Circle by someone who actually went there, and its plates were the first illustrations of that area published. This copy includes the very rare folding map. $18,500.