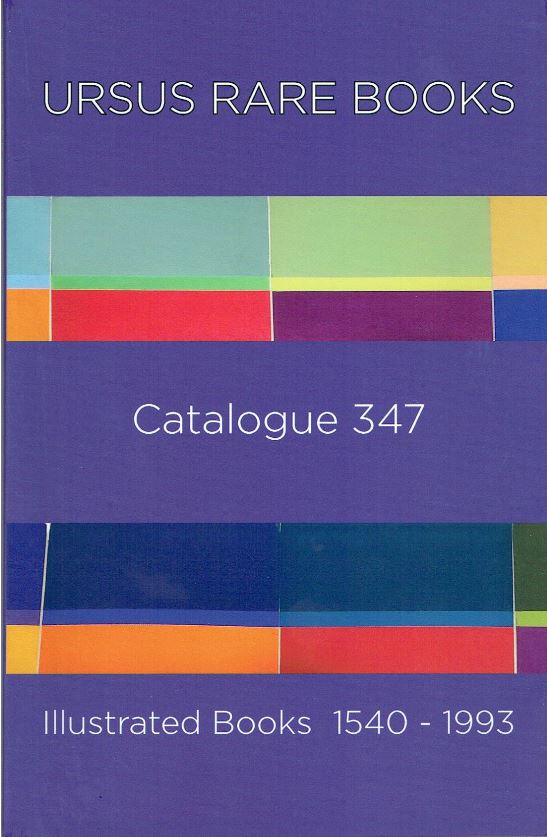 Ursus Rare Books has issued their Catalogue 347 of Illustrated Books 1540-1993. That's five centuries worth of illustrations that are mostly such as could be considered works of art. Most, at least of the older books, are European in origin except that Ursus also has a large selection of books that were created in Japan. The language may be more challenging to those in the West, but the beauty is universal. Here are a few selections from these illustrated books.

We begin with the creator of some of the most enduring illustrations ever to appear in books. William Blake was both an artist and engraver, and while his work is deeply admired today, he was not nearly so appreciated during his lifetime. His life was a constant struggle to get by. As such, he was fascinated with the biblical Job, whose life was also a struggle, though on a somewhat greater scale. Such is the life of an artist. He finally got his opportunity to do illustrations based on Job, and 21 engraved plates of his images can be found in Illustrations of the Book of Job, published in 1825, two years before Blake died. Each of his illustrations includes a quote from the Book of Job, along with a decorative border. There were 150 copies printed, this being one of 65 on French paper. While most copies are either significantly foxed or washed, this copy has only some light foxing and has not been washed. Blake only got the opportunity to create these illustrations because his friend, the artist John Linnell, recognized Blake's genius before most others and commissioned him to create this work when Blake was age 68. Item 32. Priced at $85,000.

Here is a book that provides artistic illustrations in both quality and quantity. It is one of the Japanese books. Its title is Orimon Ruizan (historical textiles at the Imperial museum). Published in 1892, it contains 1,040 color woodcuts on 520 leaves, housed in 10 volumes. It features woodcuts using a “superb array of colors, including gold and silver.” Ursus continues, “It would be hard to find a more beautiful collection of Japanese designs.” They also note that “this is the most comprehensive imaginable encyclopedia of Japanese textile design.” Item 45. $15,000.

Next we have the architectural drawings for a massive building project in Milan. The title is Projetto sul Foro Bonaparte...in Milano..., the architect Giovanni Antonio Antolini. The architect for what was called the Bonaparte Forum (in honor of Napoleon and the ancient Roman Forum) was approved by its namesake who controlled Milan at the time. The new forum would contain many buildings around a circular plaza. Courthouses, theaters, public baths, universities, and museums would be among the structures, which were designed to move the center of the city away from its current narrow streets. Commercial businesses would surround the main structures. The only shortcoming to the project was that it was never built. Despite Napoleon's approval, the project was too grandiose for practical implementation. These drawings were as far as it ever went. This edition, without text, was published in 1814, but Ursus believes the 24 plates were actually remainders from the original edition published in 1801-1804. Item 30. $35,000.

I am not sure whether this is a feminist book or exactly what it is. It is unusual. The title is Les Vrais Pourtraits de quelques unes des plus grandes dames de la Chrestiente, disguises en Bergeres, published in 1640. That translates to “true portraits of some of the greatest ladies of Christendom, disguised as shepherds.” The author/artist was Crispijn van de Passe, the Younger, of Amsterdam. The book comes in four parts, the first part displays royal women, including queens, the second lesser royalty, the third women from the merchant class, many known to van de Passe, the fourth artists. The women are real, but what is odd is that all are disguised. Each is dressed as a shepherd, which van de Passe explains was an ideal employed by artists at the time, but not a dress of high fashion, which would look ridiculous once fashions changed. The artist provides some clues as to who the women are, but while some of the more notable ones such as royalty are identifiable, others are unknown to scholars today. The reason for all of this is unclear. Item 10. $22,500.

Here is another odd book, though that is explained by it being humorous. The title is L'Empire des Légumes (the vegetable empire) featuring the artwork of 19th century French artist and engraver Amédée Varin. The writers were Eugene Nus and Antony Meray, but it is Varin's drawings that stand out. These are of humanized vegetables, containing all the failings of humans. In Varin's drawings, carrots, radishes, onions, beans, lettuce, asparagus, artichokes and other vegetables walk and talk like people. Also known as Droleries Végétales (humorous vegetables), the book includes a frontispiece plate and 24 other plates of the humorous vegetables. Item 39. $7,500.