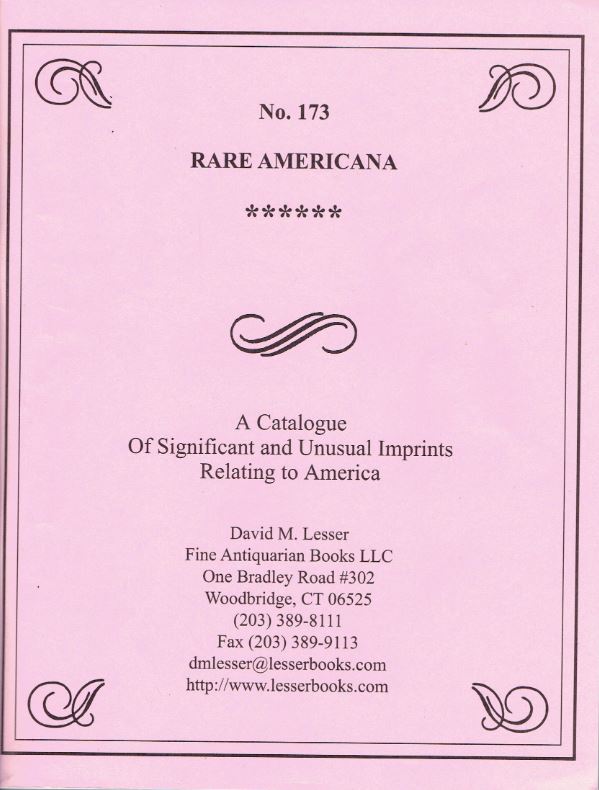 David M. Lesser Fine Antiquarian Books has released their Catalogue 173 of Rare Americana. Mostly pamphlets, broadsides, and other shorter form paper, the items are usually focused on the issues of the day. From the 18th and 19th century, topics are often political or religious, and frequently argumentative. Criticism, constructive and otherwise, is often the focus. A few items actually involve personal disputes, rather than issue-oriented ones. Here are a few of the items in this latest David Lesser catalogue.

Politics, then as now, has often been ugly. Here is an example from 1828, View of General Jackson's Domestic Relations, in Reference to the Presidency, by Charles Hammond. Hammond, who disliked Jackson intensely, attacks his wife as a way of getting at Andrew Jackson. Rachel Jackson was long separated from her first husband and believed he had obtained a divorce. Evidently, he had not, raising questions about the legitimacy of her marriage to Jackson. Gen. Jackson's opponents had a field day with the issue, portraying her as an immoral woman, thereby making her husband immoral too. Hammond describes Rachel Jackson as “a convicted and avowed adulteress,” making Jackson unfit for office. Hammond pontificates, “If the female head of the family be destitute of the characteristics and accomplishments which adorn the station she moves in, it never fails to produce an unfavorable effect...” The voters obviously disagreed as they elected Jackson President anyway. Item 44. Priced at $375.

Speaking of a man's view of women, here is another one from Albert Alden, circa 1835-1840. It is a woodcut illustration of The Life and Age of Woman, Stages of Woman's Life from Infancy to the Brink of the Grave. It depicts a woman at the ages of 1, 12, 18, 30, 50, 75, and 90. There are captions to describe each age. At 18, she risks “bestowing [her affections] on man unworthily or in vain.” She need first give her heart to God. At 30, she is at the peak of her intellectual and physical powers. It is all downhill from here. At 50 “her home is her castle,” as she spends her time devoted to her household and counseling her children. By 90, “we see all that remains of her.” She is stooped over, cane in hand. Item 1. $2,500.

For those who think war is Hell, Rev. Thomas Verner Moore had different thoughts. Instead, it is a gift of God. Moore gave his sermon in Richmond in the Confederate South on November 15, 1861, a day of “Humiliation, Fasting and Prayer” proclaimed by President Jefferson Davis. The sermon is titled, God Our Refuge and Strength in this War. Moore preaches that war “is a part of the agency by which God Disciplines nations.” He explains, “A long course of peace and prosperity, acting on our depraved nature, tends to emasculate and corrupt a people... War tends to break up this mammon-worship, effeminacy and selfish expediency, to show that there are nobler things to be contended for in life.” He also gave “thanks to Almighty God for that wonderful triumph at Manassas, where the destinies of our young Republic hung trembling in the balance until God gave us victory.” Evidently, God changed sides around the time of Gettysburg. Item 93. $450.

This is an interesting collection of printed material, not what you might expect. Item 116 is a complete set of presidential foil cigar bands. The bands are mounted chronologically, with Grover Cleveland getting only one, providing the collector's opinion as to whether his non-consecutive terms constitutes a separate presidency. These bands, which were slipped around the ends of cigars, feature an image of each President from Washington through Theodore Roosevelt and his name. The last President included most likely dates this collection to sometime during Roosevelt's presidency, 1901-1909. $375.

Next we have an 1876 catalogue for Wood Brother Coach Builders. These were carriages pulled by horses back in the days before automobiles. Wood Brothers was evidently a high quality builder as they provided coaches for Presidents Lincoln, Johnson, and Grant. Their main address was on Broadway in New York. The eight-page catalogue displays the various coaches the firm made. As best I can tell, this catalogue came near the end of the company's existence, the Wood Brothers aging out and selling off their assets a few years later. Item 163. $350.

This next item has a title that sounds questionable, but it actually represents a major undertaking in the cause of religious freedom. It comes from the state of Maryland in 1829, the title being Speeches on the Jew Bill in the House of Delegates of Maryland by H.H. Brackenridge, Col. W. G. D. Worthington, and John S. Tyson. The “Jew bill” was designed to allow Jews to hold public office. The Maryland constitution required that office holders profess to believe in the Christian religion. After passage of this bill, declaring belief in a future state with rewards and punishments was sufficient. Item 63. $20,000.