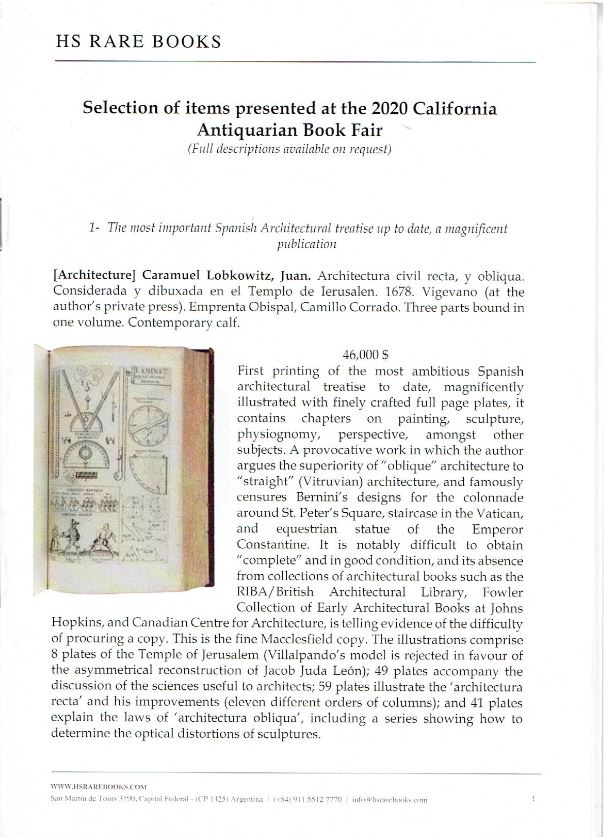 Books at the California Fair.

This month we review our first catalogue from HS Rare Books. The title is Selection of Items Presented at the 2020 California Antiquarian Book Fair. HS made a longer journey to get there than most exhibitors. They came from Argentina. Many of the works relate to Latin America and Spain, as one might expect, and California is an appropriate place for such a bookseller since it was once a Spanish possession too, part of Mexico. However, a few books have other origins. Most of what we find is very old, and much is of significant importance. They brought some fine material to California. Here are a few samples.

We start with an early look at the Jesuit missions in northern Mexico, including the far northern areas that became the American Southwest. Some of it covers Florida as well. The author of this 1645 first edition was Andres Perez de Ribas, the title Historia de los Triumphos de Nuestra Santa Fee entre gentes las mas barbaras y fieras del Nuevo Orbe (History of the Triumphs of Our Holy Faith among the most barbarian and wild beasts of the New World). Cultural sensitivity was not big in those days. Of particular note is the surviving account of Don Pedro Porter y Casanate's voyage along the California coast relayed by a letter from Father Jacinto Cortes. It describes their visit and the local Indians in the early 17th century. Item 9. Priced at $34,000.

This next book covers a scientific expedition primarily to South America which would prove to be one of the most important scientific explorations in all of history. The title is Narrative of the Surveying Voyages of His Majesty's Ships Adventure and Beagle, Between the Years 1826 and 1836. It was edited by Captain Robert Fitzroy and published in 1839. It consists of two separate voyages, one from 1826-1830, the second 1831-1836. It is a four-volume set, volume 1 covering the first voyage, volume 2 the second, and volume 4 is an appendix. However, it is volume 3 that is of most significance. It was written by the naturalist on board the second voyage, Charles Darwin. This was his first book. The second voyage was focused on Patagonia, the southern part of South America. Darwin studied the life forms on the mainland and offshore islands, noticing similarities and differences between them. Not even Darwin fully understood what he was seeing. That would come after his return when he had a chance to consider more deeply what he had seen and come up with a theory to explain it. Within a few years he had his answer, but Darwin would not publish his findings until two decades later, when he published his groundbreaking and controversial advocacy of his theory of evolution. Item 22. $45,000.

That brings us to Darwin's exposition of his theory, Origin of Species, except this is the first Spanish translation, so the title is Origen de las Especies, published in 1877. That was a long time after the first edition which was published in 1859. The likely explanation for such a long delay is that the Church still had enormous influence in Spanish-speaking countries and Darwin's theory ran counter to their teachings at the time. The Spanish edition also includes two letters from Darwin in which he expresses his satisfaction that his text was now being made available to almost 20 Spanish-speaking countries. This edition is very rare. Item 21. $9,000.

Next we have a very strange tale, as its title forewarns. That title is The Strangest Adventure that ever happened...containing a discourse concerning the successe of the King of Portugal Dom Sebastian, from the time of his voyage into Africke when he was lost in the battle against the infidels. Published in 1601, this is the first English edition of authors Jose Teixera and Anthony Munday's account of Sebastian's ending and some of the chaos that ensued. Sebastian had been king for 21 years when he embarked on his mission, though that is somewhat misleading. He was only 24 years old, having succeeded his grandfather to the throne at the age of 3. By all accounts, Sebastian was a popular king, friend to the poor, promoting education and medical care. He was also a devout Catholic, having been raised by a religious grandmother. He was ready to do battle with the infidels on the other side of Mediterranean from Portugal. He got his chance when the loser in a power struggle in Morocco asked for his help. King Sebastian led a charge of 18,000 soldiers into the heartland of Morocco. There he was greeted by 60,000 soldiers and overwhelmed. King Sebastian died in battle. However, there was no recognizable body, so many hoped their beloved King would one day return and save them from the chaos that ensued. He left no logical successor, but there were numerous pretenders, some claiming to be King Sebastian. This work tells of the attempts of one of the impostors, Marco Tullio. Item 66. $7,500.

This is a first Spanish edition of the first work devoted entirely to women. It was written during the 14th century by writer and poet Giovanni Boccaccio under the title De Mulieribus Claris, but the Spanish title is De las mujeres illustres en romance. It was published in 1494. It contains biographies of sorts of over 100 women, not all real, from the biblical Eve to a 14th century Queen of Naples. Seventy-six woodcuts were made to illustrate the women, though likenesses of historical features would have required some imagination. This is a very rare book, made even rarer by it being a complete copy. It still contains leaf 103 describing the life of Pope Joan. This page was regularly removed from copies, the Church considering the supposed female Pope to be nothing but fiction. Item 5. $125,000.