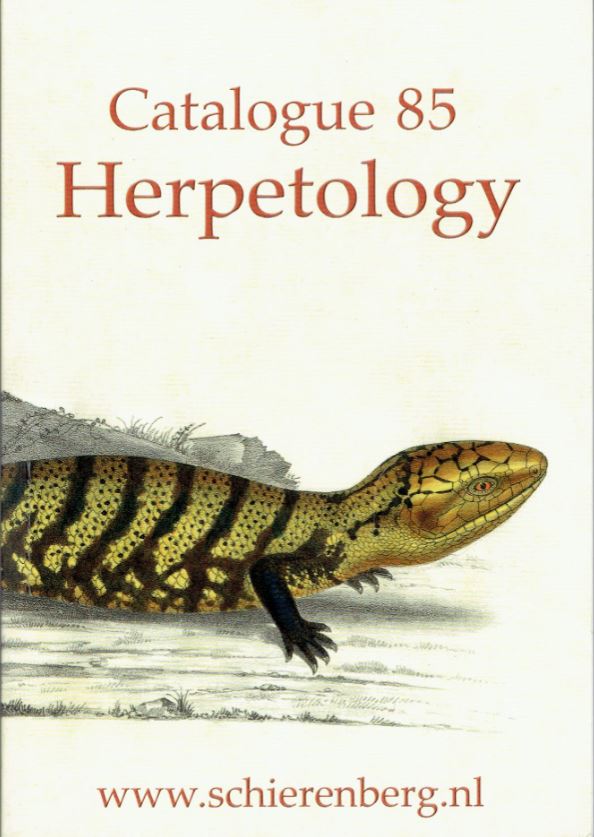 This month we review our first catalogue from Antiquariaat Schierenberg, of Amsterdam, The Netherlands. It is hardly the first Schierenberg catalogue. This is #85 for a firm founded in 1974, after formerly being part of a company dating back to the 19th century. They specialize in books and other material in the fields of natural history and science. They note having one of the largest inventories in natural history on the European continent. The title of this catalogue is Rare and Illustrated Books and Periodicals on Herpetology. Herpetology refers to the study of reptiles and amphibians, animals such as snakes, turtles, crocodiles, lizards, frogs, toads, and salamanders. “Herpetology” is from the Greek word for creeping animals, and that describes many of these, though some hop, others slither. Most are useful to us, eating bugs we don't like, but a few can be dangerous due to their poisonous bites or sharp teeth. You may be among those, like myself, who love these sorts of animals, or of those who fear them, but whichever, it is undeniable that they form an important part of our ecosystem.

This catalogue contains a surprising 781 items in the field. Those who collect herpetology will have a field day with this one. The catalogue is divided into sections to help you pinpoint your particular interests. Here they are: Fine and Rare, General Herpetology, General Amphibia, Salamanders, Frogs and Toads, General Reptilia, Crocodiles, Rhynchocephalia, Lizards and Amphibaenia, Snakes, Turtles and Tortoises, Extinct Groups, Terraria, Prints and Posters, and Periodicals. Here are a few sample items from the catalogue.

This is a thorough study of the reptiles of the American West. Specifically, it is titled The Reptiles of Western North America. An Account of the Species Known to Inhabit California, Oregon, Washington, Idaho, Utah, Nevada, Arizona, British Columbia, Sonora and Lower California. Volume I covers lizards, volume II snakes and turtles. It is the “magnum opus” of John Van Denburgh, which “laid the foundation for the present-day herpetological studies in the American West.” Van Denburgh was a physician and herpetologist who was the curator of the herpetology collection at the California Academy of Sciences. He was involved in expeditions and acquisitions to rebuild the academy's collection after the San Francisco earthquake destroyed much of it. Item 383. Priced at €200 (euros, or approximately $216 in U.S. dollars).

Schierenberg describes this next book as “an utterly rare, if not the rarest work on herpetology.” The title is the Veneous Snakes of Southern India. The author is C. C. Sargeaunt, the publication date 1875. Part of the explanation for its rarity is that it was privately published. Schierenberg notes that “next to nothing is known about Sargeaunt” other than that he was a captain in the British Army in India. The book features detailed and accurate illustrations of the various venomous snakes. This must be the only book to provide species names in Latin, English, Tamil, Telugu, Hindustani, and Canarese. In some cases, a language is left out because there is no word in the language for a particular snake, likely because that snake is not found where that language is spoken. Item 54. €8,800 (US $9,546).

It is well-known that Napoleon promoted an enormous scientific and historical study of Egypt in the early 19th century as he was conquering the world. It provided some of the greatest knowledge we have of that ancient, historic land. Less well known is that Napoleon III conducted a scientific expedition to Mexico after France conquered that land while the United States was busily engaged in its Civil War. This was hardly comparable to the Egyptian expedition, Schierenberg noting that it only produced “some haphazard results,” with the French quickly losing interest. Nevertheless, a few “superb monographs” were created, and this is part of one from the Mission Scientifique au Mexique et dans l'Amérique Centrale, published in 1874. This section includes the rare part on salamanders, frogs, toads, and dibamids (a limbless lizard) written by French herpotologist Paul Louis Antoine Brocchi. Chromolithography was used to provide the color, though the frog plates appear to be hand-colored. Item 9. €4,800 (US $5,209). Item 17 is the part covering reptiles, including tortoises, crocodiles, snakes and lizards. It was published from 1870-1897. €12,500 (US $13,567).

This next book is not quite like the others in this catalogue. The title is The Great Sea-Serpent. A Historical and Critical Treatise. With Reports of 187 Appearances...the Suppositions and Suggestions of Scientific and Non-Scientific Persons, and the Author's Conclusions. That author was Dutch zoologist Anthonie Cornelis Oudemans, his book published in 1892. This book is an account of searches for sea serpents, both in legend and science. Oudemans concluded they might be some unknown large species of seal. Item 536. €600 (US $651).

Among the sections of this catalogue is one on Rhynchocephalia, and perhaps you aren't familiar with exactly what that is. This is a creature that looks like a variety of lizard but is only distantly related. These were once common, about 200 million years ago. However, only one species survives today, the tuatara, which is found in New Zealand. Item 407 is On the Development of the Skeleton of the Tuatara, by G. B. Howes and H. H. Swinnerton, published by the Zoological Society of London in 1901. €50 (US $54).

This is a description of an unusual animal that had scientists unsure of what it was when this account was published in 1801. The title is A Historical and Anatomical description of a Doubtful Amphibious Animal of Germany, called, by Laurenti, Proteus Anguinus, by Carl Franz Anton Ritter von Schreibers. It is no longer questioned whether Proteus Anguinus, better known as the olm, is amphibious, but it is still an unusual animal. The olm is a salamander that lives in deep caves in the alps where it is always dark. As a result, its eyes are undeveloped, the olm being blind. Instead, it has developed an unusually strong sense of smell and hearing. Its skin contains no pigment and it lives its entire life underwater. Item 293. €250 (US $271).