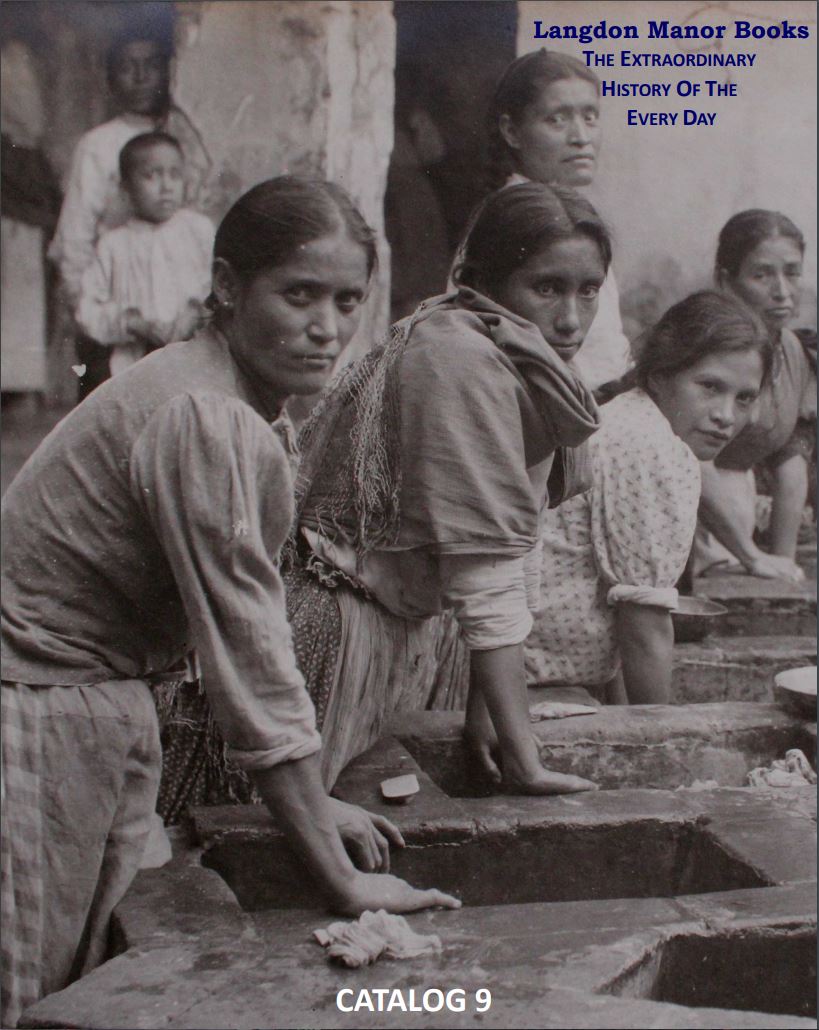 The Extraordinary History of the Every Day.

Langdon Manor Books has released their Catalog 9 of The Extraordinary History of the Every Day. Their specialty is American social movements, American personal narratives, photo albums and outsider books. The result is that there are many items that can be called archives, some large, some small. They offer collections of material from "ordinary" people who lived in extraordinary times and places. There is much in the way of first-hand material about American lives. These are a few of the selections in this latest Langdon Manor catalogue.

We begin with an extraordinary keepsake remembering a trip to St. Louis in 1918 by Ferris Reeve. Reeve was a jeweler from New Jersey who met up with a family friend, Ms. Correll Clinger of Missouri. The book is a recognition of the friendship and hospitality he was offered. What is remarkable are the illustrations added by the author. There are 27 miniature drawings in pencil enhanced with watercolor. The miniatures are mostly one square inch in size and yet Reeve has filled them with amazing detail. For example, some show street signs, the lettering only one millimeter in height and yet somehow still readable. They cover various scenes from St. Louis in surprising detail for their size. Item 22. Priced at $1,500.

Next we have a pioneering work by a remarkable woman. Author Sarah Grimke and her younger sister Angelina were born to wealth and status in the antebellum South, specifically Charleston South Carolina. Their father was a slaveholder. Against all expectations they became abolitionists. Their writings so incensed their neighbors that they were forced to move to the North to live for their own safety. It was there they continued on their mission to abolish slavery, but Sarah's outspoken words got her in trouble with a powerful clergyman. His position was that women should essentially keep their mouths shut and let men decide the big issues of the day. This book was her response, and it took her into a second cause, that of women's rights. Item 77 is Letters on the Equality of the Sexes, and the Condition of Woman. Addressed to Mary B. Parker, President of the Boston Female Anti-Slavery Society, published in 1838, well before the suffrage movement began to take shape. Grimke writes of the condescending, “protective” attitude of men towards women. She says, “This has ever been the flattering language of man since he laid aside the whip as a means to keep woman in subjection. He spares her body; but the war he has waged against her mind, her heart and her soul, has been no less destructive to her as a moral being.” $9,500.

Here is a broadside printed on satin from some people who didn't share the Grimke sisters abolitionist views. The heading reads, Declaration of the Causes which impel the State of Texas to secede from the federal Union---also the Ordinance of Secession. This was promulgated by the Texas Secession Convention after their vote to secede from the Union on February 1, 1861. The convention left no doubt as to the reason, saying that Texas joined the Union based on a basic assumption about slavery. The statement says, “received as a commonwealth holding, maintaining and protecting the institution known as negro slavery—the servitude of the African to the white race within her limits--a relation that had existed from the first settlement of her wilderness by the white race, and which her people intended should exist in all future time.” It's not one of the high points of Texas history, but the proclamation correctly points out that slavery existed since “the first settlement...by the white race.” Prior to that, when Texas was still part of Mexico, slavery was illegal. Item 52. $23,500.

The ABAA recently held their annual west coast fair in Pasadena and now we know why. Book collectors are a highly intelligent and moral group of people, and Pasadena is just the place for people like this. Item 17 is a promotional booklet for Pasadena California put out by the Pasadena Board of Trade in 1900. It describes the city's climate, history, accessibility to transportation and more details about the city, including several images. A small map is included. The city officials brag that Pasadena “was founded by an intelligent class of people and during the whole period of its history it has continued to draw unto itself residents of like character, until now it is distinguished as a city wherein the standard of intellectuality, refinement, morality, thrift, enterprise and similar qualities is exceptionally high.” $225.

Ansel Adams is noted for his spectacular photographs of scenery, particularly in California. This book also contains photographs of scenes from California, but it is otherwise nothing like Adams' other works. These photographs were taken at the Manzanar Japanese internment camp during World War II. It is in effect a photographic essay on humanity, democracy, decency, and the values Americans normally hold dear, though occasionally losing their way. The title is Born Free and Equal, published in 1944. Adams photographed the loyal Japanese-American citizens going about their lives under the deprived conditions of the camp. He left it to viewers to reach their own conclusions, but the inescapable message is that these interred ethnically Japanese Americans were no different from the rest of us. This copy has been inscribed by the Director of Manzanar to his children. Ralph Merritt was sympathetic to the Japanese held under his authority and was relatively popular with the internees based on his previous connections with the community as president of the Rice Growers Association. It was Merritt who invited his friend and fellow member of the Sierra Club, Ansel Adams, to photograph for the most part freely at the camp. Merritt writes, “To Cle and Pete to remember our days together in Manzanar when we and a lot of other folks worked together [so] that those described in this book might with us, have their opportunity for freedom & equality in America. With appreciation and affection Dad.” Adams dedicated the book to Merritt. Item 24. $1,250.