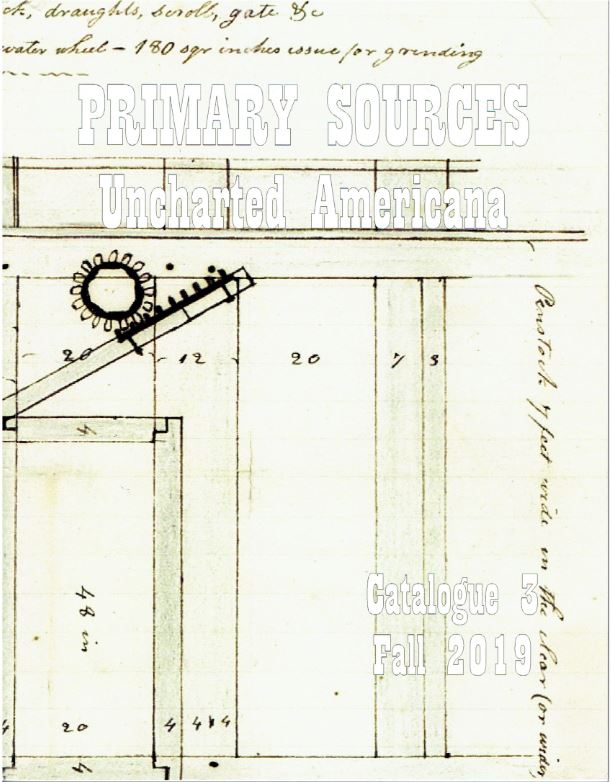 Primary Sources, Uncharted Americana recently published their Catalogue 3. They offer catalogues with just 25 items, but each is extensively documented, described, and photographed. These items all fit within the category of Americana, but there aren't many books here (only one to be precise). What they offer is original source material, the kinds of things others use as sources to write books. These are first person accounts, documents, photographs and similar items and archives. Here are a few.

Most Americans have stories like this one in their family history. Other than Native Americans, we are a land of immigrants. Item 9 is a diary kept by Ann Smith, once of the small town of Snaith in England, who made the crossing in 1843. Her ultimate destination was Circleville, Ohio. Today, you could make the journey in less than a day. It took Ann Smith two months. She had to take various riverboats from her small town to Liverpool, where she, her husband and daughter, set sail for America. She expresses much sadness about leaving her home and friends behind, and her husband even offered their daughter the fare back home, but ultimately they all go. The ocean voyage is the longest part of the trip, five weeks, some of it favorable, other times stormy and frightening. The high waves of stormy weather also leaves them terribly seasick. When they do arrive in New York, Mrs. Smith is most impressed with the city, but they don't stay long. They must make innumerable connections along the way to make it to Circleville. The next day, they are on a steamboat up the Hudson River to Albany. Then it's onto a canal boat and a nine-day trip along the Erie Canal to Buffalo. She is surprised by upstate New York. Expecting wilderness, she sees farms and beautiful homes. From Buffalo, it's a steamer on Lake Erie to Cleveland and many more connections before finally reaching their destination. Priced at $3,500.

Next are nine historic photographs from ethnographer/photographer James Mooney. He was active in the late 19th and early 20th century, and devoted much of his time to studying America's Plains Indians. That brought him to a Cherokee Reservation in Indian Territory, now Oklahoma, in 1890. It was a time of great fervent. The Ghost Dance movement, which would lead to the terrible slaughter at Wounded Knee in South Dakota, was underway. A tribal leader in Nevada had a vision that if Indians participated in the Ghost Dance, they would become immune to the white man's bullets and would recover the lands that had been taken from them. As the Ghost Dance spread, the U.S. military became more concerned and took steps to prevent it. This action culminated in the Wounded Knee Massacre. Among Mooney's photographs are three he took in 1890 of the Oklahoma Cherokees participating in the Ghost dance. The other six are of preparations for a Sun Dance by the Southern Arapahoes in 1893. This dance was also controversial because it involved some self-injury and pain. Mooney's photographs of the Sun Dance involve only preparation, not the dance itself. It is not known whether Mooney chose not to photograph the dance itself or was forbidden to do so. Item 22. $12,500.

In the days before movies, particularly the mid-19th century, some artists created large panoramas which they would display. They operated like scrolls, moving along by unrolling one side while rolling up the other. There was a particularly famous one of the Mississippi River which allowed the audience to sort of take a trip down the Mississippi, viewing the scenery as it went by. It required someone to draw the scenery along the entire river's length. Item 16 is a large promotional broadside for a showing of Otis Bullard's panorama of New York City. It covers one and a half miles of waterfront and then turns up Broadway for another four and one-half miles. The panorama itself was well over half a mile long and weighed about 2,000 pounds. It took Bullard four years and $15,000 to create it. Bullard or an associate would narrate what was being displayed as the scenery scrolled along. Sometimes, a stationary boat or some vehicle would be placed in the foreground to enhance the sense of motion. It first went on display in Hartford in 1850 and then proceeded to tour the country for many years. Bullard died in 1853, but his associates continued the displays long after. Previously, the last known showing had come in Detroit in May 1867, but Primary Sources' broadside was for April 1868 in Muscatine, Iowa. Where it went next or whatever happened to Bullard's panorama is unknown. $850.

This is an undated manuscript of a speech by an unnamed writer, likely from 1832 or 1833. It promotes the aims of the American Colonization Society. This was a group whose cause was sending free blacks in America to Africa, Liberia in particular. It was formed by an odd combination of people with differing intentions. Those sympathetic to American blacks, as this author evidently was, had concluded they would never be treated fairly by American whites so it was in their own best interests to move elsewhere. Others were motivated not by the best interests of blacks, but by removing free black people from the country for their own benefit. Particularly in the South, they feared free blacks would encourage the slaves to revolt. This fear was particularly fierce at this time as the manuscript was written not long after Nat Turner's rebellion. This took place in Virginia, where Turner had a vision that he was called to lead a rebellion for the freedom of the slaves. Gathering a group of believing slaves and free blacks, he struck on August 21, 1831. Turner and his followers killed at least 57 whites in and around Southampton, Virginia. The rebellion was quickly put down. Many more blacks were killed in retaliation, some after trials, others not, including many innocent of any crimes. Still, Turner's rebellion created great fear among southern whites. It led some to seek a gradual end to slavery, but ultimately, it led to an even greater crackdown on slaves. Any thought of freeing them, whether sent back to Africa or not, quickly disappeared. In his speech, the writer speaks of the pain of the families of Turner's victims, while acknowledging the rebellion “was one of the legitimate fruits of slavery.” He continues, “But it was only as a drop to the ocean compared with the dangers our southern brethren are hourly exposed to suffer, a danger which nothing short of colonization now effectively begun & hereafter perseveringly prosecuted can avert or lessen.” Item 6. 4,500.

In the late 18th century, Noah Webster became a very successful writer with his “blue-backed speller,” officially the American Spelling Book. It sold over 1 million copies, but few remember him for his spelling book. In 1806, he published his first dictionary, but that was not much of a success. It was his American Dictionary, first published in 1828, for which Noah Webster is known today. It was such a success in America because it was designed to define the English language as it was spoken in America rather than England. Webster spent many years and much money compiling the 70,000-word dictionary, well beyond what previous lexicographers had accomplished. For all the investment, Webster's publisher concluded he would need some reputable endorsements to generate the number of sales needed for the project to succeed. In 1826, publisher Sherman Converse put together a prospectus and wrote to several important Americans for their endorsement. He managed to gather endorsements from several of them, including James Madison. Only three of these solicitations are known to survive and this is one of them. It was sent to Joseph Story. Story is one of a handful of giants in American legal history. He served on the Supreme Court from 1812-1845 and his Commentaries of the U.S. Constitution is still regularly cited today. Converse's letter succeeded with Story. He wrote a glowing endorsement. Item 5. $2,250.

Primary Sources Uncharted Americana can be reached at 734-355-2986 or primarysources25@gmail.com. Their website is found at www.psamericana.com.