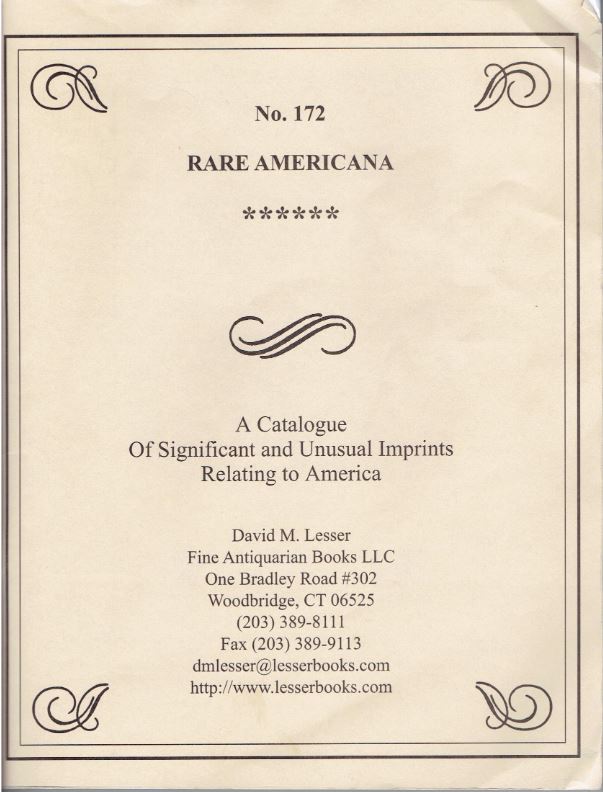 David M. Lesser Fine Antiquarian Books has published their Catalogue 172 of Rare Americana. This is their latest selection of material related to America primarily from the late 18th and the 19th century. We find much here about politics, slavery, war, crime and religion. Four out of five of those are still major topics of discussion and conflict today, and even human slavery in somewhat different forms is still around. These are a few selections from the 150 items offered herein.

We begin with an unexpected book, or at least unexpected to have been written by someone who worked in the antebellum South. The title is American Chattelized Humanity, and Its Supports. By Jonathan Walker, late of Florida, where he was put in the Pillory, fined, branded with Hot Irons, imprisoned eleven months, &c. &c., by the Government of the United States, for an attempted act of Humanity, published in 1847. Walker was a fisherman and his crime was an attempt to help some runaway slaves escape by boat to the British West Indies, where slavery had been outlawed. For his act of humanity, he was imprisoned and literally branded, with the letters “SS” for slave stealer branded on his hand. He became known in the North as “the Man with the Branded Hand.” After his release, brought about when northern abolitionists paid his fine, Walker moved north and told his story and that of slaves in the South. He tells of the indignities and brutalities experienced by the slaves and the contradictions with America's expressed ideals. Writes Walker, slavery “has plunged us into deep disgrace in the eyes of the civilized world, and into awful guilt at the bar of our common humanity.” An image on the cover depicts a slave sale with the caption “Horses, Slaves, & Other Cattle Sold Here.” John Greenleaf Whittier wrote a poem about Walker entitled “The Branded Hand.” Item 143. Priced at $750.

Here is a man who had a very different view of what constitutes freedom. Judah Benjamin was a Louisiana senator who held several high level cabinet posts in the Confederate government after the outbreak of the Civil War. He was an eloquent speaker who used his skills to promote slavery and racism. In his waning days as a U.S. Senator before resigning to join the Confederacy, he delivered this Speech of Hon. J.P. Benjamin, of Louisiana, on the Right of Secession. Delivered in the Senate of the United States, Dec. 31, 1860. In it, he claimed the states had the right to secede, while foreseeing the likelihood that it would lead to war. He concludes that while the Union “may carry desolation into our peaceful land,” and “set our cities aflame,” that “you never can subjugate us; you never can convert the free sons of the soil into vassals, paying tribute to your power; you never can degrade them to a servile and inferior race. Never! Never!” Evidently, he missed the irony of using a claim to defend the “free sons of the soil” to justify enslavement of the people who actually worked that soil on behalf of the plantation owners. At the end of the war, Benjamin managed to escape the country as Walker's slaves attempted, by getting a boat to take him to the Bahamas. Item 10. $1,000.

Confederate officials and soldiers weren't the only people to suffer losses as a result of their side's defeat in the Civil War. Also, there was Curtis Wilhoit and others like him. They were owners of Confederate bonds. Item 29 is one such bond, stating “It is hereby certified that the Confederate States of America are indebted unto Curtis Wilhoit or assigns in the sum of forty eight hundred dollars redeemable after the first day of January 1866 with interest...at eight percent per annum.” No, it was not redeemable on January 1, 1866, as there was no Confederate States of America to redeem it anymore. Four thousand eight hundred dollars was a lot of money to lose in 1866. This certificate is signed by Robert Tyler, son of President John Tyler, the only U.S. President to support the Confederacy during the Civil War. $350.

Abraham Lincoln freed (most of) the slaves at the beginning of 1864 through the Emancipation Proclamation, but it took a constitutional amendment to eliminate the practice once and for all. That was the 13th Amendment. It states that neither slavery nor involuntary servitude, except imprisonment for conviction of crimes, shall exist in the United States. It went into effect near the end of 1865. Item 1 is a collage of pictures of all the senators and congressmen who voted to adopt the 13th Amendment, along with President Lincoln and Vice-President Hannibal Hamlin. Hamlin was still in office when Congress passed the amendment, though he had been replaced by Andrew Johnson by the time the states ratified it. Item 1. $750.

Just before the Civil War started, a little boy was born in San Francisco... a very little boy. His name was Leopold S. Kahn, and a decade later he was discovered by P.T. Barnum. At the time, Barnum described him as being even smaller than Tom Thumb. In Barnum fashion, P.T. gave him a military title and name, “Admiral Dot,” and put him on display. Item 64 is a carte de visite of “Dot” circa 1876. The caption says Admiral Dot, Eighteen years old; Twenty-five inches high. Twenty pounds. The “Admiral” is standing on a luxurious, velvet-seated chair. I found an earlier such card in which “Dot” at age 14 was only 16 pounds though 25 inches tall. Evidently, all that eating must have stirred his growth hormones. Admiral Dot became too tall for Barnum. He married another small person and had two average size children. Eventually, he reached four feet tall. $125.

Admiral Dot had a nephew who also experienced dwarfism and was also part of Barnum's show. Lesser offers his carte de visite too. His name was Samuel Kahn, but Barnum gave him the name “Major Atom.” His card is captioned, Major Atom, Aged 10 Years, Weight 15 lbs. No height is given. Item 65. $125.