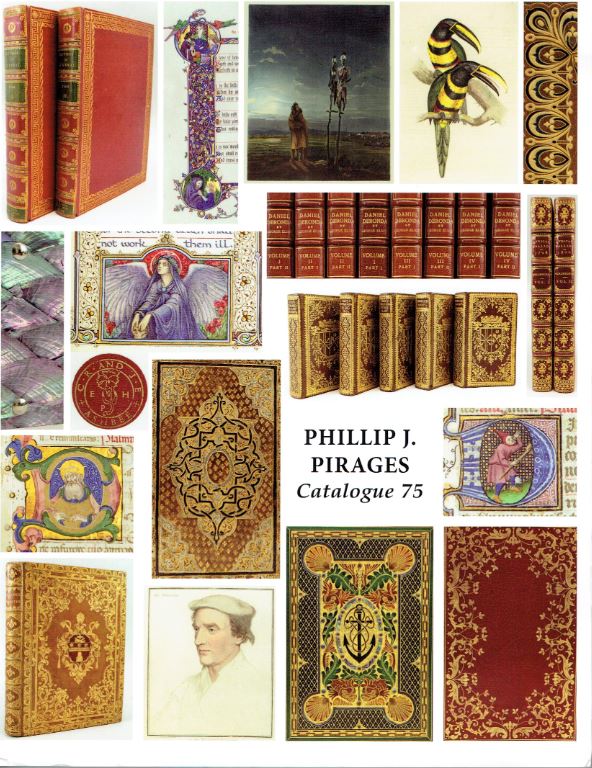 Phillip J. Pirages Fine Books and Manuscripts has released their Catalogue 75. Manuscript Material, Incunabula, and Books Printed from 1501 to Present, Including Fine Bindings and Private Press. It is filled with items meant for the best private and institutional collections. Pirages does not target a particular subject or type of book, but rather, concentrates on important material from across a wide spectrum. We can note that the manuscripts are not a lot of typical handwritten documents but professional scribal material, often illuminated, some predating the invention of printing. Here are a few examples of the important items to be found in this latest selection.

We will begin with the oldest item in the catalogue. Actually, Pirages notes that it is the oldest leaf they have ever sold. It is a page taken from the Homilies of the Venerable Bede. Bede was a Catholic theologian in Jarrow, England, who wrote in the early eighth century. He died in 735. It was unusual to find many notable church scholars in England that early. He is still regularly referred to as “venerable” although he was canonized a saint. That came over a millennium later (1899) so the label “venerable” is still used though he is now St. Bede. Based on such factors as the type of parchment and style of writing, the creation of this manuscript leaf can be traced to the monastery at Fulda in Germany. It can also be dated to the middle or second quarter of the ninth century. The Homilies would have been first scribed by monks in Jarrow a little before Bede's death, but later brought to the continent where they were copied in Fulda. Like many of the really old extant manuscript leaves, this one survived because it was used in the bindings of a later book when it was thought to be of no further use. Often, these documents are now worth far more than the books in which they were used as bindings. Item 2. Priced at $48,000.

This next item is not nearly so old as the previous one, but it is still very early for printed books. It contains the Confessionale: Defecerunt Scrutanter Scrutinio of Antoninus Florentinus with Sermo de Poenitentia of Johannes Chrysostomus. The former was a 15th century Archbishop of Florence, the latter a fifth century bishop. The first is a confessional, the second a sermon. It was published circa 1470 and that early on there wasn't a lot being published beyond religious tracts. This is a second edition. The printer was the first in Cologne, Ulrich Zel. Zel had served an apprenticeship with Johann Fust and Peter Schoeffer. Fust loaned Gutenberg the money to set up the first printing press and Schoeffer served as Gutenberg's assistant. When Gutenberg was unable to repay the loan, Fust sued him and won possession of Gutenberg's equipment. With the now skilled Schoeffer as his partner, they became the successors to the forced out Gutenberg. The binding was created by “the Master of the Rose,” Cologne's first binder. Item 99. $16,000.

Women have rarely received due recognition, even in present times, so it is surprising to see a book such as this coming from the 15th century. The author was Jacobus Philippus de Bergam, the title De Claris Mulieribus (concerning famous women), published in 1497. This is actually something of a continuation of a book by the same title written by Giovanni Boccaccio and published in manuscript form in the 14th century, and first printed in 1473. That was the first western collection of biographies exclusively about women. Jacobus was a historian, although his standards would not be regarded as very high for a historian today. His biographies and 172 woodcut portraits include not only historical women, but biblical and mythological ones as well. Naturally, most of these portraits are based more on period imaginations than actual images of the women, which were nonexistent. However, the final seven are of women from Italian noble families contemporary with Jacobus, so those were drawn either from life or realistic images. The book starts with the Virgin Mary, but goes back to earlier biblical figures, all the way to Eve, and mythical figures such as the snake-haired Medusa. This is why we say Jacobus was not always a discerning historian. The often missing entry for Pope Joan is supplied in facsimile. Pages for the female pope who almost assuredly never existed, but many believed was real at this time, were often destroyed as the Church did not recognize her existence. Pirages describes this as “one of the finest illustrated books of the Italian Renaissance.” Item 113. $25,000.

Here is a book by a man whose extreme puritanical views would not be much appreciated today. They weren't even appreciated in his own day. His name was Thomas Hall, and his book's title is Akosmia, the Loathsomnesse of Long Haire. With an Appendix Against Painting, Spots, Naked Breasts, &c., published in 1654. In case you are unfamiliar with the term, “Akosmia” means chaos. Hall makes biblical arguments against long hair on men, evidently unaware of the typical portraits of Jesus, and speaks of how matted long hair can become infested with vermin and bleed. He even says that some men in Poland lost their eyes when their long hair was cut. This is another example of a dubious historical claim. Hall cites the better known Puritanical hair-cutter William Prynne and his book about “love-locks,” but Pirages tells us that Hall says even he didn't condemn long hair sufficiently. After 95 pages on men, Hall adds some pleasant comments for the ladies, such as calling make-up “the badge of the harlot.” Hall was a minister, but when the Restoration in England replaced the previous Puritanical rule, his congregants threw him out. Item 131. $3,000.

Item 230 is A Note by William Morris on his Aims in Founding the Kelmscott Press. Together with a Short Description of the Press by S. C. Cockerell, and an Annotated List of the Books Printed Thereat. This was the last book printed at the Kelmscott Press, in 1898, two years after Morris died. The staff was in wind down mode of already started projects during the two years after Morris died. The Kelmscott Press and William Morris were the primary movers in the fine and private press movement which continues to this day. This is one of 525 copies on paper. Morris describes his admiration for the artistry of 15th century books which he hoped to restore. He says, “they were always beautiful by force of the mere typography, even without the added ornament, with which many of them are so lavishly supplied.” This is very fine copy, hard to find now. $3,000.

That item leads us to a new book, written by Phillip Pirages and just published, Letters from the 15th Century: On the Origins of the Kelmscott Chaucer Typeface. The text provides new information about Morris and his library and about early printers and typefaces. Each copy includes five leaves, one from the Kelmscott Chaucer, and one each from the 15th century presses of Peter Schoeffer, Johann Mentelin, Gunther Zainer, and Anton Koberger, each admired by and influential on Morris. The pages were taken from defective copies, or in the case of the Kelmscott Chaucer, unbound pages. It has been printed in a limited run of 165 copies. Prices vary depending on the leaves supplied and style of binding.