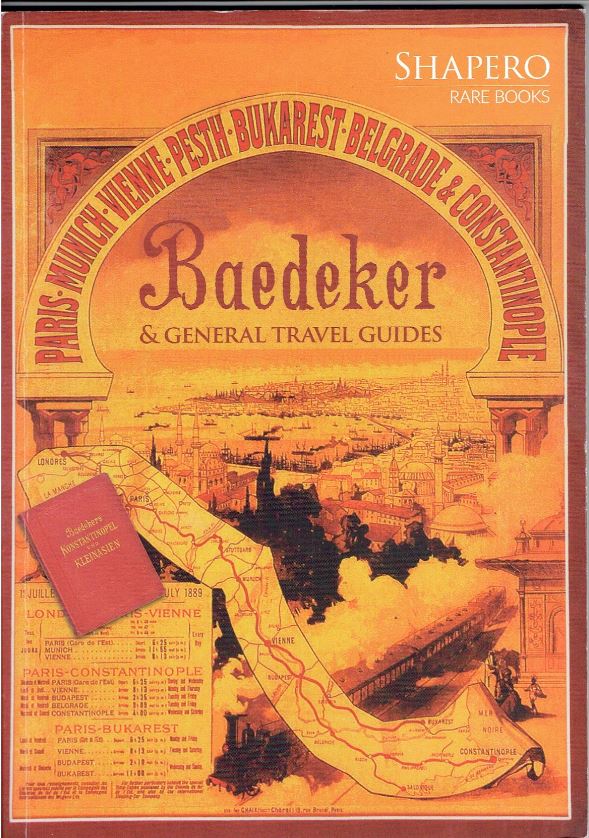 Baedekers and other guides.

This month, Shapero Rare Books takes us on an international trip. The catalogue's title is Baedeker & General Travel Guides. While not as well known in America, the “Baedekers” have been the most used of travel guides on the Continent and England for almost two centuries. They have been favored since people were getting around in boats, on horses, and on foot.

Baedeker is a German firm, established by Karl Baedeker in 1827. While guides were published in Germany, there have been editions in French and English since the second half of the 19th century. They have helped travelers visit places throughout Europe, and occasionally more exotic locations, like India, Egypt, Palestine, Russia, and the United States. The Baedekers are usually comprehensive guides with maps to help tourists get around. They point out the important sites.

The survival of Baedeker in the 20th century is in itself a remarkable feat. The firm was doing very well, with its British English-language guides quite popular, when World War I broke out. Those guides would come to a halt, and German tourists, naturally, stopped traveling to English-speaking and various other locales. After the war, resentment made Germany less than a desirable tourist spot, and next came the Great Depression and the rise of Nazism. Follow that up with World War II and the division of Germany into East and West and it was a rough few decades for Baedeker. Nevertheless, the Baedeker family persevered and started up again after WWII. They continued until 1984, when running out of heirs to continue the business, it was sold to corporate owners. It continues today. Here are few selections from the 423 travel guides found in this catalogue, 304 of them Baedekers.

After Karl Baedeker died in 1859, management of the firm went to his eldest son, Ernst. Ernst lived for only two more years, but it was during his brief tenure that Baedeker published its first guide in English. The title is Rhine from Switzerland to Holland. That includes Northern Germany and Berlin along with a side trip to Copenhagen. The 260-page guide contains 12 engraved views and 24 maps and plans. Item 52 is a first edition, published in 1861. There would be 18 subsequent editions until the last, in 1926. Priced at £3,000 (British pounds, or approximately $3,984 U.S. dollars).

The fourth Baedeker to run the company was Fritz, and his era saw the greatest expansion. In 1893, he published the first guide to America, United States with an Excursion into Mexico. This was the first Baedeker guide originally written in English. The writer was James Muirhead, who would go on to publish another series of well-known travel books, the “Blue Guides.” Item 102 is the first edition, containing 17 maps and 22 plans. £400 (US $527). Shapero also has later editions of this guide, from 1899 and 1909.

Next is Southern Germany, and the end of the best times for Baedeker. It was published in 1914, the last pre-war edition. It was the twelfth edition of this guide, and only one more would be published, in 1929, just before another disaster hit. Item 55. £80 (US $104).

Here is a guide published at a notable moment in time in Germany. It is Deutsches Reich und Einige Grenzgebiete (German Empire and some border areas), published in 1936. It was published in conjunction with the Olympics of that year, a tense event as other nations came to a country controlled by Hitler. A plan for the games was provided in the rear pocket. It contains 33 maps and 75 plans. Most of the town squares, bridges, etc., show the Germanized names given by the Nazi regime. There is also a slip noting the change in the name of Saarlouis to Saarlautern. The “louis” part of Saarlouis was named after French King Louis XIV and the Nazis were not going to accept cities named for French rulers. It changed back in 1945. Item 177. £325 (US $422).

This is an atypical Baedeker guide. The title in Generalgouvernement. That was the name given to a part of Poland that was occupied by Germany in 1943. The name went back to Russian days in the territory and was used by the Germans from 1914-1918 during the previous war. The German government requested Baedeker publish this guide for occupation troops. This is the first and only edition, from 1943. Item 179. £250 (US $333).

Item 371 is La Belgique et Nassau; ou le touriste continental (Belgium and Nassau, or the continental tourist), published in 1838. This is an “other” guidebook, that is, not from Baedeker. It was published by Black & Armstrong of London. It is a scarce French edition. This copy is notable as it came from the library of Empress Marie-Louise. She was the second wife of Napoleon. He divorced #1, Josephine, because she bore him no children and Marie-Louise was the daughter of the Austrian King, giving the Emperor more of the royal legitimacy he lacked. They were together for a few years, and evidently reasonably happy, but he went into exile, she left France, and remarried after Napoleon's death in 1821. She lived another 26 years, which explains her owning an 1838 guide. £1,250 (US $1,666).