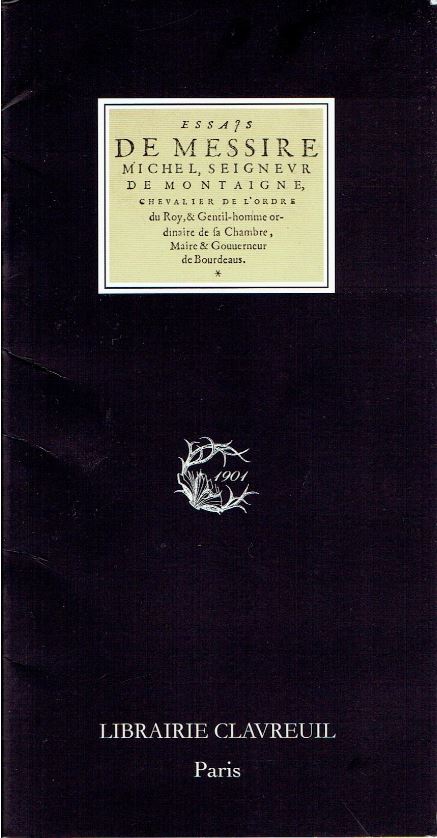 The Essays of Michel de Montaigne.

Librairie Clavreuil of Paris has published a catalogue of Onze Editions des Essais de Montaigne (11 editions of the Essays of Montaigne). That is literally what is found here, eleven separate editions of the same book. Some were expanded with later additions by the author, but all are versions of the famous Essais of Michel de Montaigne, written in the 1570s and 1580s.

Michel de Montaigne was born into a prosperous family in 1533. He received the best of education, private tutors and the best schools, studied law, and received his first appointment to a public position in 1557. He would later serve in the court of Charles IX and the Parliament of Bordeaux. He was well-respected and often served as a bridge between various factions, his judgment highly regarded by all. However, he was not happy with the strife and intolerance he saw around him. By 1571, he had had enough. He resigned his positions, retired to his library, and began studying and writing. He put his thoughts on many subjects down on paper. They would become his Essays, first published in 1580.

Montaigne's essays are first about himself, but that description is misleading. They are not the writings of someone with an inflated ego. Rather, he felt he needed to look into his own thoughts to find the answers to his questions. This reflects his feelings toward the world around him, where he saw others following the party lines of others without examination. It is why Montaigne is associated with both skepticism and freedom. He questioned others, making him a skeptic, while demanding the freedom to come up with his own ideas. He expressed them on numerous topics in his Essays.

It should be noted that the term “essay” in French relates to an attempt to find something, rather than a definitive truth. To Montaigne, his essays were such an attempt. However, as a result of his efforts, the term “essay” has come to define a shorter work focused on a specific subject, that is, the type of writing Montaigne employed in his Essays.

After finishing his Essays, Montaigne returned to public service where he again became a buffer between varying factions, attempting to bring about resolutions to conflict. He was particularly involved in trying to resolve religious conflicts, of which there were many during his time, especially between Catholics and Protestants. He was Catholic, but appreciated by many Protestants as well. He worked on revisions to his original Essays, publishing a third book of them in 1587. Unfortunately, he suffered health issues and died in 1592 at the age of 59.

Here are the 11 editions of the Essais (with some slight variations in title) offered by Clavreuil. We need to note that the first edition, though described, has already been sold.

2. Second edition. Certain additions and corrections were made by Montaigne for this edition. Published in Bordeaux. 1582. Price on request.

5. First posthumous edition (actual fifth, excluding a pirate one). “New edition.” Montaigne left additional material and instructions for this edition to his “adopted” daughter, Marie de Gournay. Some parts from the previous editions were censured and removed. She also supplied her own annotations. Published in Paris. 1595. €12,000 (US $13,394).

9. First edition printed in three volumes. Includes the dedication from de Gourney to Cardinal Richelieu. While editions were now being published elsewhere, this one was also from Paris. 1659. €4,500 (US $5,022).

11. First five-volume edition, third by Pierre Coste. Improved even more and augmented with letters from Montaigne. Published in Geneva with a false address from The Hague. 1727. €1,500 (US $1,674).