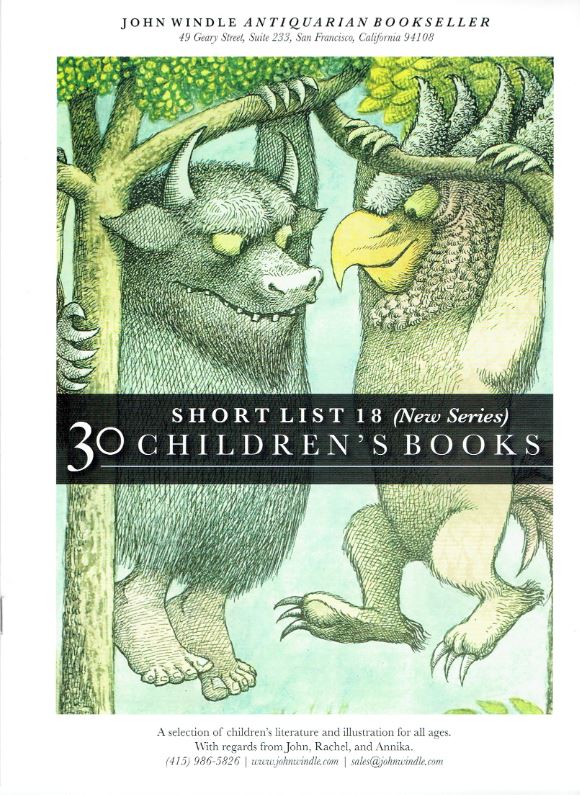 John Windle Antiquarian Bookseller has released a catalogue of 30 Children's Books. While we all have different tastes in books, just about everyone likes those for children. Our common denominator is all having once been children. These books are flights of fantasy, entertaining stories, often accompanied by fantastic illustrations. We loved them then, and love them still. Here are a few samples.

An insect's appetite may not sound like the subject for one of the most popular and greatest selling children's books ever, but that just shows what a little creativity can do. According to author Eric Carle, his inspiration was a hole punch and some paper. It made him think of the after effects of a bookworm. Item 8 is the children's classic The Very Hungry Caterpillar, published in 1969. The story revolves around a caterpillar, just hatched from his egg, who notices that he is quite hungry. Each day, he eats increasing amounts of fruit, eventually graduating to things real caterpillars do not consume, human foods such as pizza, pickles, ice cream and lollipops. Finally, he becomes satiated, spins a cocoon, and emerges a beautiful butterfly. What makes this book particularly appealing is that Carle had the pieces of the pages cut out, or holes punched through the pictures of food so as to appear it had been eaten by the caterpillar. The book was printed in Japan because that was the only place a printer could be found to make the necessary cuts. Offered is a first edition, first printing. Priced at $850.

Next we have Artistic Pussy and her Studio: Moving Pictures with Other Tales, a Moveable Toy Book from Lothar Meggendorfer, published circa 1890. Meggendorfer was a German illustrator noted for creating moveable and pop-up books. Pull tabs would operate the moveable parts sandwiched between the pages. Not surprisingly, these books that allowed for reader participation were very popular with children. Copies that still function of these old books which were handled by children can be hard to find, but four of of these six still function well, the other two only partially. Meggendorfer's illustrations were also special, this book containing such as a cat painting a portrait of a dog, and a monkey soothing a crying baby. Item 16. $1,250.

Here are a few more books with odd physical attributes, three to be exact. The writer/artist was Peter Newell, who did humorous books and poems around the turn of the last century. The man was quite inventive. Item 21 is a collection of three of Newell's books. First we have The Slant Book. It is shaped like a rhomboid, creating a slant in its physical shape. This one is about a runaway baby carriage, the slant shape of the book creating a downhill surface down which the carriage rolls. Published in 1910. Next we have The Hole Book. This one follows the path of a bullet as it crashes though various things, shocking (but not injuring) bystanders. Newell has used a die cut hole in the center of the book that runs through its pages to show the path of the bullet. Published in 1908. Finally, there is The Rocket Book. In this story, Fritz, “the Janitor's bad kid,” finds a rocket in the basement of an apartment building. He strikes a match and sets it off, shooting straight up until stopped by a can of frozen cream on the 21st and top floor. This book too uses a hole in the center to follow the path of the rocket through each of the floors. Published in 1912. $2,950.

Here is another more recent classic. Maurice Sendak is one of if not the most popular post-Seuss children's author, and if there is one book for which he is best known, this is it. Item 27 is Where the Wild Things Are. It was first published in 1963, though this is a later edition. Normally, that wouldn't be so special, but this was inscribed by Sendak in March 1986. The recipient was Charles Mikolaycak. Mikolaycak was a children's book illustrator. He illustrated more than 60 children's books, many more dust jackets, and occasionally wrote a book himself. It's not surprising that Sendak would appreciate his work. $1,750.

This is the first book of children's fantasy written by L. Frank Baum, of Wizard of Oz fame. It was created from stories Baum invented to entertain his children. The title is A New Wonderland, and if you are looking for the missing link between Alice in Wonderland and the Wizard of Oz, this is it. It takes place in the similarly named strange world of Phunnyland. It was published in 1900, and you may say he published a couple of children's books prior to that, which is true, but he wrote this one first. It sat on the shelf for four years before finding a publisher. You may also say this is not the first book Baum wrote, in which case you know him well. However, it was his first children's fantasy. Years earlier, he wrote a book about raising the Hamburg variety of chickens, a book which did not achieve lasting fame nor 40 years of sequels. Item 3. $3,950.