Agriculture and Its Produce from Jonathan A. Hill Bookseller 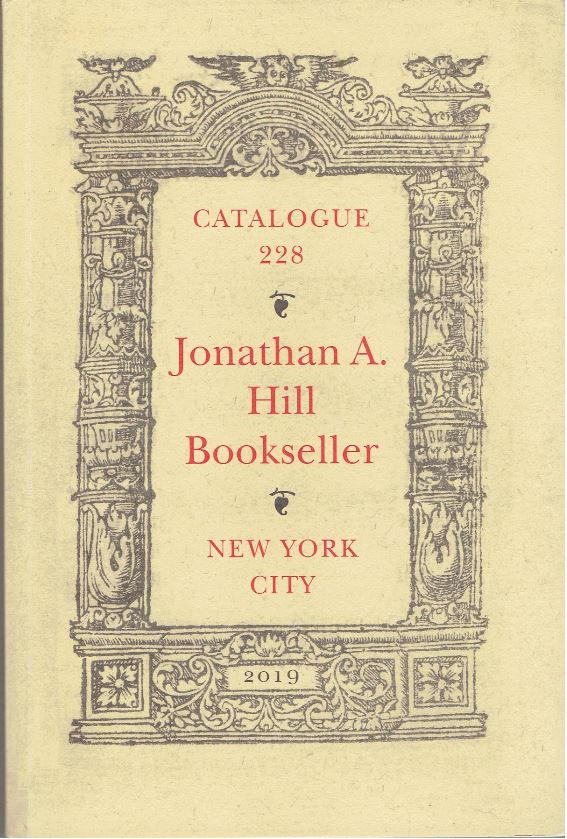 Agriculture and its produce.

Jonathan A. Hill Bookseller has issued Catalogue 228, of Agriculture, Beer, Botany, Famine Relief, Farming, Food, Gardening, Horticulture, Irrigation, Land Reclamation, Utopias, & Wine. That's quite a variety, but when you think about it, it all comes down to growing things. This is a catalogue of growing crops and gardens on the land, and this is how it was done many years ago. Many of these cover the latest knowledge and developments in agriculture, but these books mostly range from a couple of centuries ago to the days before the invention of printing. There may actually be something new under the sun, but not in this catalogue. This is strictly antiquarian. These are a few selections.

You may think of price controls as being a fairly recent phenomenon, but they go way back. In England, one of the earliest set was placed on bread, it being a major staple of nutrition in medieval times. The regulations were first established in 1266 and continued into the 19th century. In Europe, controls were established even earlier. The rules were adjusted on occasion, but were seriously enforced to ensure an adequate bread supply. Item 12 is an edition of them published in 1626, The Assize of Bread, With sundry good and needful Ordinances for Bakers, Brewers, Inholders, Victuallers, Vintners, and Butchers; And other Assizes in Weights and Measures, which by the Laws of this Realm, are commanded to bee observed and kept by all manner of Persons, as well within Liberties as without. The title actually goes on much longer, but this will do for a start. This book was published from the 16th until the 18th century with most editions being quite rare. Hill tells us they had an unusual way of dealing with increases in the price of grain. Bakers profits were controlled, but when the price of ingredients went up, they needed an adjustment. However, they were not allowed to raise the price of bread. Instead, they were allowed to reduce the size of a loaf, and vice versa if grain prices went down. This book has tables for the weight of bread. It also has numerous woodcuts displaying the steps of baking it. Priced at $18,500.

Here is another item concerned with prices, but it covers a much more important staple than bread – wine. It comes from France, of course, Burgundy to be specific. It is a 17th-18th century manuscript which kept track of prices from 1622-1789. Obviously, it was kept by several generations. The heading is Taux des fruits du Baillage de Nuits depuis 1622 a 1789 a M.rs De Bays. That translates roughly to “prices of the fruits of the Bailiwick of Nights since 1622 to 1789 from Misters De Bays.” We think it must have been kept by the de Bays family and since it is written in several different hands, that it was a running report, rather than something compiled in 1789. It covers various agricultural products, notably grapes and wine, along with cereal crops and oils. The first few decades have more of the latter two, but by the second half of the 17th century, wine predominates. The beginning in 1622 may be related to that being the year of a decree forbidding wines from Lyonnaise and Beaujolais from being sold as Burgundy wines. This manuscript provides an outstanding look at agriculture in Burgundy over 170 years and the growth of its wine business. It was more of steady growth through the years in Burgundy, rather than the boom times experienced in Bordeaux, but still there were good years and bad ones, depending on wine prices and the success of the crops. Prices hit notable peaks in 1701, 1733, and 1770. Item 15. $25,000.

This book will help you if you are looking to purchase or lease land for your farm. The title is The Land Purchaser's Companion: and the Laws relating to Tenants and Tenures... The author was Giles Jacob. Jacob wrote in two fields, the law and literature. His legal writing was widely respected, his literary efforts not so much. He did find himself in a print battle with Alexander Pope and earned himself a place in Pope's comic epic poem, The Dunciad. This book was published at the time of the South Sea Bubble. The English had granted the South Sea Company an exclusive right to trade with South America, which sounded to many like a fantastic opportunity, but the Spanish and Portuguese, who controlled the continent, had little interest in trading with Britain. Jacob warned readers about speculative prices, saying, “on the late flourishing business in Exchange Alley, occasion'd by the great rise of the South-Sea stock, such extraordinary fortunes have been acquir'd by merchants and others, that the immediate value of lands...is considerably advanc'd, even to thirty-five or forty years purchase, near the city of London, but this cannot be expected to be a standard rule for the future, or to times in general.” I don't know whether Jacob was foreseeing what would happen to the South Sea stock or reacting to it. This book was published in 1720, the year in which that stock reached its speculative peak in August, only to lose 90% of its value by year's end. Item 45. $1,500.

Here is a title that might lead to a misunderstanding. Item 36 is The Reformed Husband-Man; or a Brief Treatise of the Errors, Defects, and Inconveniences of our English Husbandry... edited by Samuel Hartlib. My wife could relate to this, though she might call it the unreformed husband-man, but this book refers to the other type of husband-man and husbandry. This is husbandry as in the cultivation and raising of crops and animals. Hartlib published numerous pamphlets, this being one, comprised of letters and treatises written by others. The likely writer here was Cressy Dymock. Hartlib had a circle of friends from which he drew his works. This one concerns planting and plowing of corn, including moral advice and an exhortation to utilizing the latest developments in farming. Published in 1651. $2,500.

Here is another title that might lead to a misinterpretation if you don't carefully observe the spelling. Item 42 is The Description and Use of the New Invented Patent Universal Sowing Machine... by John Horn. That is “sowing” machine, not “sewing” machine. This book was self-published in 1786. Earlier in the century, Jethro Tull had invented a machine that could drill and plant certain seeds while being pulled by a horse. It was 18th century automation at its best. Horn's machine was an improvement, a machine that could drill and plant all different types of seeds. Herein Horn provides illustrations of the parts of his machine, prices, and how to order them. $2,750.

Item 64 is a long scroll from Japan depicting medicinal plants. It comes from the mid-Edo period, which would place it in the 18th century. The creator is unknown but was obviously a skilled artist. The illustrations are of high quality and very detailed. Descriptions are provided in Chinese characters. There was much work put into this scroll as it is about a foot high and 26 feet long. $15,000.