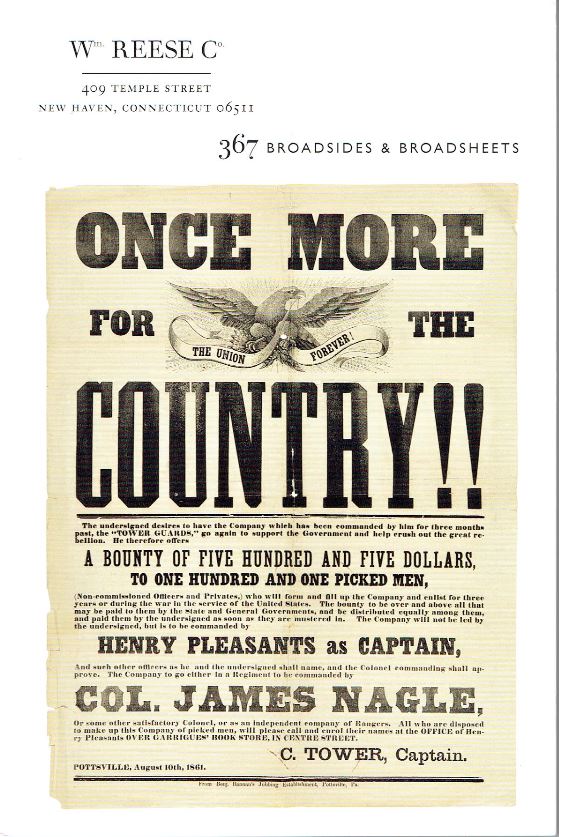 The William Reese Company has issued a catalogue of Broadsides & Broadsheets. These are single sheet printed items, such as posters and handbills. Most were printed on paper but a few are on linen. Most modern broadsides tend to be posters announcing events or advertising handouts promoting sales. Going back to the 19th century, they were often used to disseminate news. Today, the internet, radio and television, transmit news almost instantaneously, so printed sheets are rarely used. In earlier times, the single sheet was often the fastest way to get out breaking news, quicker than printing entire newspapers and magazines. Still, the uses we see today were also common in earlier times. While the majority of these sheets are American in origin, there are also many from England, Europe, Mexico and South America to be found. Here are a few of the old ones Reese has gathered up for this catalogue.

The Declaration of Independence was still two months away when people in Massachusetts were already pledging their support for the revolution. Item 70 is a broadside from early May 1776, beginning: Colony of Massachusetts-Bay, 1776. We the subscribers, do each of us severally for ourselves, profess, testify and declare before God and the world, that we verily believe that the war, resistance and opposition in which the United American Colonies are now engaged against the fleets and armies of Great-Britain, is on the part of the said Colonies, just and necessary. Citizens are called on not to “aid, abet, or assist” the King's navy or land forces, nor supply them with any sort of provisions. They are also not to provide any intelligence, recruit forces on their behalf, or take up arms against the United Colonies. This oath was printed after the Massachusetts legislature voted to sever ties with Great Britain on May 1. The sheet was intended to be signed, though this copy has not been. Item 70. Priced at $13,500.

This is the oldest broadside in the catalogue. It is undated, but circa 1581. It features a full length portrait of Sir Francis Drake, the first Englishman to sail around the world. It celebrates his circumnavigation. In Latin, it is headed Franciscus Draeck Nobilissimus Eques Angliae is est Qui Toto T Terrarum Orbe Circumducto... This portrait has appeared elsewhere, but is rare and is one of only a few lifetime portraits of Drake. What is surprising is its place of printing – Nuremberg. It contains some poetry in German, again a surprise. Why were Germans celebrating this Englishman who was a privateer, essentially little more than a pirate? Queen Elizabeth and the British loved him because he stole from their rivals, the Spanish, and the Queen received a portion of his booty for her protection, but the Germans? The answer seems to be that it depicts him as going off to fight for Christendom. The broadside warns soldiers not to act as mercenaries for non-Christians. It appears that the broadside's creator was using Drake's reputation as a fighter for the British to encourage others to fight the Turks on behalf of Christendom. Of course, Drake never did that himself. The only nations he ever fought were also Christian nations. He was in it for the money and prestige. Perhaps the average German in 1581 was not aware of this detail. Item 44. $120,000.

The Hamptons on the eastern end of New York's Long Island are among the most exclusive addresses in America. Evidently, it was always so. Even in 1858, Bridgehampton had a “Committee of Prosecution” to keep the the riffraff off the streets. A broadside, boldly headed NOTICE announces, “At a public hearing of those opposed to the running of large CATTLE, SHEEP & HORSES on the highways and unenclosed Wood-Land, the undersigned were appointed a committee to prosecute the owners of such Cattle, Sheep and Horses, so tresspassing [sic]. Notice and fair warning therefore hereby given to that effect.” It does not specify the penalty, but it must have been effective as, to the best of my knowledge, there are no cows wandering the streets of Bridgehamption today. Item 15. $600.

Item 65 is a rare first printing of two of President Abraham Lincoln's last three presidential proclamations, issued on April 11, 1865. Three days later, he was shot at Ford's Theatre and died the following day. Lincoln issued one more proclamation later on the day of April 11. The first of the two proclamations announces the closing of a large number of Confederate ports to vessels from outside the U. S. or carrying goods subject to duties. The ports were to remain closed until reopened by the President. Lee's surrender at Appomattox had occurred just two days earlier, but not all Confederate forces had yet surrendered. The second proclamation is a correction to the first, stating the the Port of Key West would remain open. Both of these proclamations are headed, simply, A Proclamation. They are signed in type by Lincoln and Secretary of State William Seward. $10,000.

Next is an illustrated poster presenting W. I. Swain's Western Spectacular Production Jesse James. It was printed circa 1920, about 40 years after James passed on to his final reward or punishment. The caption says “Hands Up Sheriff? The prison is not built that will hold Jesse James.” James has his pistol pointed at four men, probably lawmen, one of whom drops his gun, the others raise their hands. James is not alone. A blond woman, one foot on a chair, the other on a table, also points her pistol at the four men. An African American man, from outside, points his gun through an open window at the four. James has allies. This may not be an accurate depiction of history. I am not aware of a blond woman who rode with Jesse James and participated in any of his gunfights. As for the African American ally, James cut his teeth working for Confederate irregulars who participated in gruesome killings of northern sympathizers. This all seems a bit of a stretch. Item 121. $2,000.