Hunting and Fishing in the South from L & T Respess Books 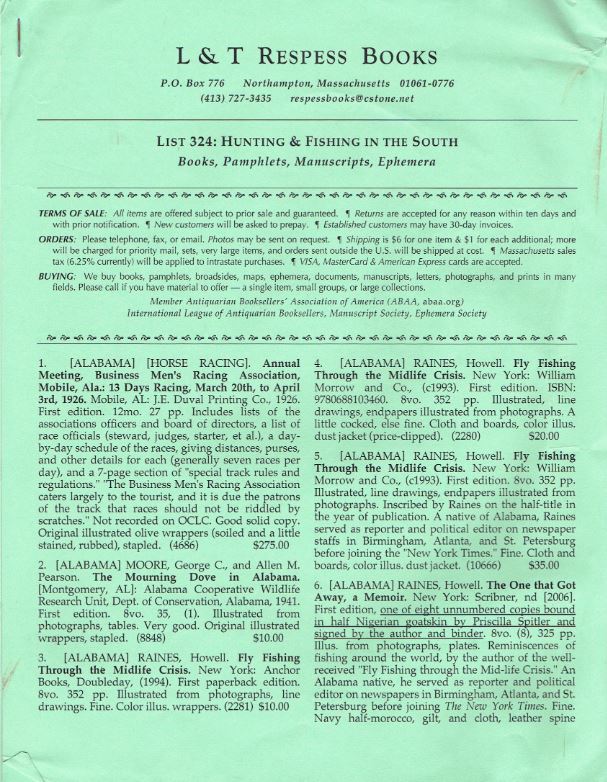 Hunting & Fishing in the South.

L & T Respess Books has issued their List 324: Hunting & Fishing in the South. Everything here at least touches on one of these subjects in one of the southern or border states. Most are entirely about hunting, fishing, or both. Many are very specific such as a book about Chesapeake Bay retrievers or urban bassing in Virginia. Where else will you find one of these books? Even if retrievers in the Chesapeake or bass in Virginia aren't your cup of tea, your own niche may also be here. Collectors of hunting and fishing books need to take a look. Most items are quite inexpensive, double digits as low as $10. Others are a bit more but not many make that fourth digit. Here are a few selections.

This book covers everything described in this catalogue: Hunting and Fishing in the South: A Book Descriptive of the Best Localities in the South for Various Kinds of Game and Fish; the Game Laws of Virginia, North Carolina, South Carolina, Kentucky, Georgia, Florida, Alabama, Tennessee, and Mississippi, States Penetrated by the Southern Railway. That list tells you which states are involved, and if you read the title all they way to the end, you will understand why this book was published. First published in 1900, this edition came from 1905-1906. That was a little before people were taking long trips in cars. If you wanted to go to the South, you took the railroad. The Southern Railway wanted you to come on down. It is filled with information plus photographs, line drawings, and a map. According to contemporary advertisements, the railroad would send you a copy for three cents postage. Train fare was on you. The Southern Railway was formed by combining numerous small southern railroads in the 19th century. It exists today as the Norfolk & Southern. Item 139. Priced at $225.

Next we have a book from a man who took his hunting and fishing seriously. Published in 1961, the title is Trails, Trouts, and Tigers: Outdoor Reminiscences on Six Continents, by R.G. Kelly. Kelly was a Charleston, West Virginia, attorney and expert on wildlife in his home state. Those hunting and fishing trips covered all 50 states and Canadian provinces and 50 nations on six continents. He must have taken a lot of time off from lawyering. His overseas trips were for big game hunting, including elephants, tigers, polar bears, and many others. Some of those choices would make him unpopular today. Item 189. $50.

This is an unusual hunting related item. It's an indenture for two young men to be gunsmith apprentices. It was signed by the clerk of Fayette County, Kentucky, on February 13, 1804. The two young men were orphans William and John Richardson. They were to be apprenticed to Daniel Bryant until they reached the age of 21. The indenture requires Bryant “to teach or cause them to be taught the art and mystery of gunsmiths in a masterly and workmanlike manner also reading writing & arithmetick as far as and including the rule of three with propriety and at the expiration of the said apprenticeships is to furnish each of the said apprentices with a decent new set of clothes...and pay each of them three pounds ten shillings.” Bryan was a Revolutionary War veteran who operated a farm and a gun shop. He lived until 1845. The Kentucky Rifle Foundation listed a William Richardson as being a Lancaster, Pennsylvania, gunsmith in the 1840s. Item 71. $850.

Here is a man we generally associate with things other than fishing, but evidently he participated in the sport. Item 169 is Washington as an Angler, with Extracts from his Diaries 1787-1789, by George H. Moore, published in 1887. That would be George Washington. His diaries show that Washington participated in fishing trips with fellow patriots Gouverneur and Robert Morris near Valley Forge in 1787 and New Hampshire in 1789. This book was dedicated to another President, Grover Cleveland. Item 169. $200.

This is another hunting and fishing book featuring a man best known for other endeavors. The title is Tarpomania & Buck Fever. Published in 1928, it combines the books Tarpomania from 1908 and Buck Fever from 1911. Not surprisingly, those cover tarpon fishing and deer hunting. The author was Eldridge Reeves Johnson, a machinist who developed improved records and record players starting around the turn of the century. With Emile Berliner, who had already formed a gramophone company, Johnson created the Victor Talking Machine Company. It became America's largest phonograph manufacturer, and their brand name for their device, the Victrola, was for many years synonymous with record players. Their logo, Nipper the dog listening to “His Master's Voice” through the machine's horn, is undoubtedly still familiar to most people today. This book was privately printed in an unknown, but limited quantity. Item 143. $2,000.

I don't know whether this is a good book, but Respess' description is. It is the story of a fox hound, “Old Limber”; or, The Tale of the Taylors. It was written by DeLong Rice, published circa 1921. The hound belonged to Alf Taylor, who served as Governor of Tennessee from 1921-1923. Alf Tyalor actually ran against his own brother for Governor in 1886, losing that election. They toured together, attacking each other's politics but then joking around and playing the fiddle together. Respess explains, “Story of Alf and Bob Taylor and Governor Alf Taylor's 'peerless and famous fox hound.' A little foxing...” Item 153. $10.