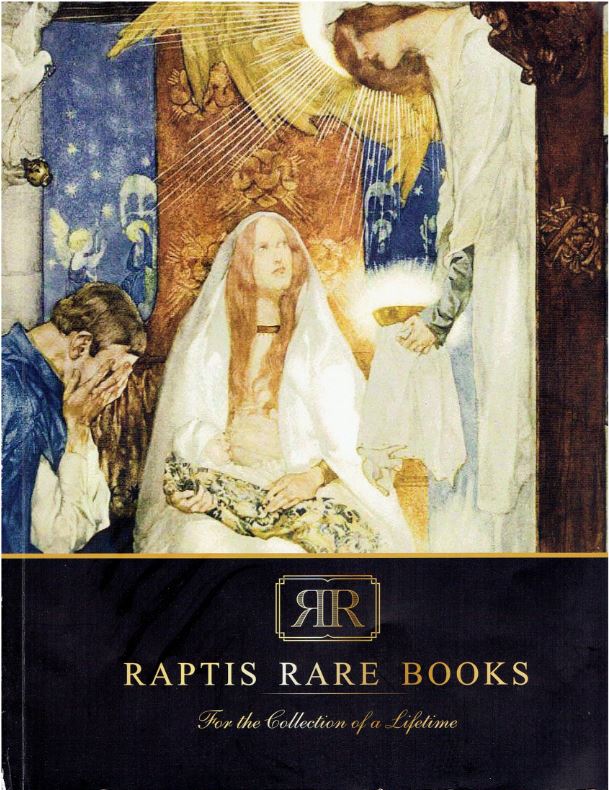 Raptis Rare Books has issued a new, untitled catalogue, described by its table of contents. Here it is: History, Philosophy & Religion, Exploration & Scientific Discovery, Americana, Literature, Children's Literature, Economics & Industry, Sports, Entertainment and Arts. Books offered by Raptis are noted both for their importance and excellence of condition. These are a few.

Since there isn't a separate military section, we will place this with history. It is a very old book, that is, it was written long ago, two millennia before printing. This is a first English language edition of what is usually known as “The Art of War,” but is here titled The Book of War: The Military Classic of the Far East. It was published in 1908 but the book was written around 500 BCE. The author was Sun Tzu, a Chinese general about whom not much is known other than that he was an official of the state. All these years later, Sun Tzu remains a well-respected and read military strategist, particular in Asia, but in the West as well. His enormous contribution to military strategy was his employment of various tactics other than just battling the other side in war. That included such things as spying, deceit, temporary strategic submission, and making alliances. He knew all the tricks of the trade to enable even a weaker foe to overcome the odds. Item 100855. Priced at $6,500.

Next we have a photograph, and it is one of the most iconic political pictures ever. It depicts President Harry Truman on a platform on a train in St. Louis. Just two days earlier, the election of 1948 took place and no one thought the incumbent Truman has a chance against the challenger, New York Governor Thomas E. Dewey. Among those was the Editor of the Chicago Tribune. Based on reports from their Washington correspondent and polling, they were confident of the outcome. As a result, in their early edition, not to be beaten to the punch, they screamed in bold headlines, “DEWEY DEFEATS TRUMAN.” That was a colossal error. As Truman was leaving by train for Washington from St. Louis two days later, someone handed him a copy of the paper. He held it up with both hands and a big smile. Photographers clicked away. This is one of those classic photographs, but this one has been inscribed by Truman below the photo, “Kindest Regards to Myra Lee Phillips,” and is signed by Truman and dated Jan. 28, 1949. Phillips was the secretary of White House Council Clark Clifford. Item 95352. $3,200.

Charles MacKay was a Scottish journalist who published a book debunking what he described as popular delusions. Published in 1841, the title is Extraordinary Popular Delusions and the Madness of Crowds. He has divided this into three categories, national delusions, peculiar follies, and madness of crowds. His description of certain economic delusions are particularly notable and serve as reminders to investors still today. This includes some notable economic bubbles – the Mississippi Company, South Sea Bubble, and Tulipmania. It seems every generation has to learn this advice the hard way. Other delusions MacKay took on include prophesies, duels, the Crusades, alchemy, haunted houses, and witch hunts. This copy comes with an autograph letter from MacKay while Editor of the Illustrated London News. Item 81224. $14,000.

This is one of the gangster classics. It is the first book from W.R. Burnett, who went on to write many more, a few well known. The title is Little Caesar and it was published in 1929. Better known is its film adaptation, which introduced the little known actor Edward G. Robinson to the public. He would go on to play many gangsters and tough guys through a long career. The film adaptation of Little Caesar is considered the originator of the gangster film genre. Item 102243. $7,500.

John Muir is one of America's most influential naturalists and preservationists. His most noted explorations were in California and the Pacific coast. Muir wrote many books on the subject, was instrumental in expanding national parks, and giving that designation to Yosemite in particular, and was a founder of the Sierra Club among his many accomplishments. So, here is an atypical title for him: The Cruise of the Corwin: Journal of the Arctic Expedition of 1881 is Search of DeLong and the Jeanette, published many years later in 1917. The Jeannette sailed from San Francisco in 1879, hoping to find a warm water channel between Russia and Alaska that would allow them to reach close to the North Pole. It didn't turn out that way. North of Siberia, the Jeannette got trapped in ice. There they stayed, for 19 long months until the pressure of the ice crushed their boat. The 33 men took their small boats and headed south for open water, from which they would seek the Siberian coast. The boats soon were separated in a storm. One disappeared, never to be heard from again. The other two made it to separate locations along the coast. From one, all the men were found by natives and survived. From the other, two men set off to find rescue, which they barely did, but by the time rescuers reached the others, all had died of starvation or exposure. When Muir saw an opportunity to study natural history on some of the islands in the Bering Sea, something he long wanted to do, he jumped at the opportunity by joining the search mission. Item 97365. $3,000.

Here is an account of another journey into a very cold place, though it was much farther south. The altitude made it cold. This is the story of The Ascent of Everest. There had been many attempts before this, but this was the one that finally reached the top. It was published in the year of the achievement – 1953. The author was John Hunt. His name is not the most remembered because, while he was the mission leader, he was not one of the two to reach the top. They were Edmund Hillary and Sherpa guide Tenzig Norgay. The 16th chapter was written by Hillary to describe the final ascent to the top. This copy has been signed by both of the men to reach the top, Hillary and Norgay, along with three others from the mission, including Jim Whitaker, who ten years later was the first American to reach the summit. Item 102345. $6,500.