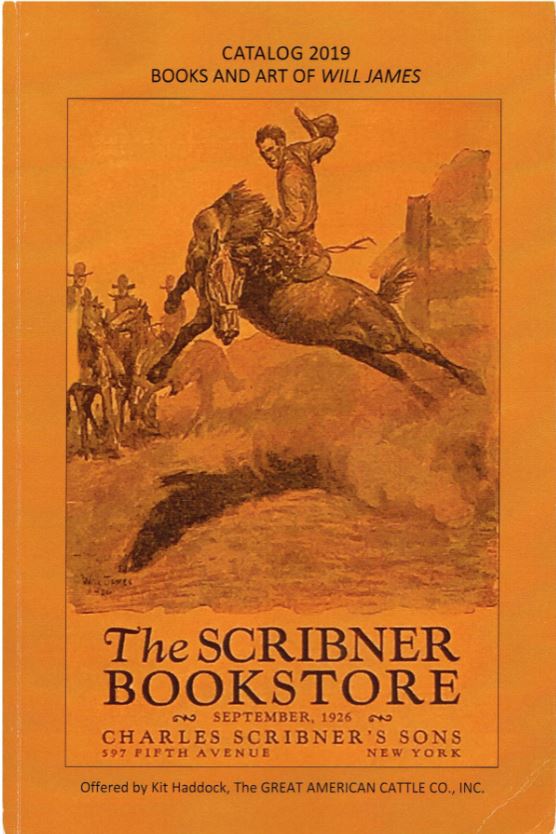 The books and art of Will James.

Kit Haddock and The Great American Cattle Company have issued a catalogue on the Books and Art of Will James. For clarification, this is not writer/philosopher William James. For distinguishing characteristics, suffice it to say that Will James was a cowboy. He was also an artist and a writer. However, his art and writing were entirely focused on life as a cowboy and experiences on ranch and range. He was the quintessential chronicler of life in the American West in days gone by, a man who captured the lifestyle better than just about anyone else.

There were also some contradictions in James' life. He was born on the rangeland of Montana, or so he said. Years after his death, it was discovered he actually was born in 1892 in Quebec, a French Canadian named Joseph Ernest Nephtali Dufault. James would later explain his French accent to growing up close to a French-speaking American cowboy after his mother died. He migrated to western Canada in his teens, then to Montana, and then to Nevada. There he was arrested for cattle rustling and spent a year and a half in prison. He told the jailers his name was Will James, an error he never corrected.

James had a natural talent for art, and during his stay as a guest of Nevada authorities, he had lots of time to work on his skills. Once he got out, a reformed man, he managed to live in two worlds. He was mostly a cowboy, and yet he also found time to work as a stunt rider in Hollywood, go to art school in San Francisco, and even briefly enrolled at Yale University. One imagines if he, too, had been born in New York City, he might have ended up writing like the other William James. He may not have been well-educated, but Will James had gifts few other cowboys possessed. Still, his greatest love was the life of a cowboy, and if there is one thing that distinguishes his western writing and art from most, its his ability to enable the reader or viewer to see through the eyes of a cowboy, rather than just looking at one.

Unfortunately, James had a weakness, suffered by many others out on the lonely expanses of the West, though also many in the big cities as well – alcohol. It eventually broke up his marriage and then took his life. He died in 1942, barely past his 50th birthday, of cirrhosis of the liver. He had ambitions for still greater works, but his life was cut short too soon.

The Great American Cattle Co. catalogue must have the best collection of James' work you will ever see. It begins with some of his magazine articles. This is where he was first published, notably in Scribner's Magazine, although he also was published in Sunset and the Saturday Evening Post. This would lead to his many books published by Charles Scribner & Sons. Most of these books will be found in this catalogue, which then moves on to his artwork. He did a lot of drawing, which has the benefit now of providing original pencil or pen artwork that is available for only a few hundred dollars. Others are more expensive, but even those on a limited budget will find an opportunity to own an item of original artwork by Will James.

Now, we will single out a few items from this catalogue, taken from the selection of books offered.

We begin with the logical starting point, Cowboys North and South. This was Will James' first book, published in 1924. James introduces himself with these words on the dust jacket: “Good English is all right, but when I want to say something I believe in hitting straight to the point without fishing for decorated language...I was born and raised in the cow country, I am a cowboy, and what's put down in these pages is not material that I've hunted up, it's what I've lived...” While Montreal, where he was born and raised, is not exactly the epitome of “cow country” (though there may be some dairy farms in the area), the rest is true. James learned the vernacular of the cowboy, and lived the life, expressing it as well as anyone. Item 84 is a copy of this book in exceptional condition with a nearly fine dust jacket. Priced at $1,500. Item 18 is a very good copy for $900.

Next is something of an autobiography, Lone Cowboy My Life Story, published in 1930. It provides a good look at cowboy life, even if some parts are less than accurate. It includes his story of being essentially raised in the West by an old French Trapper, but he evidently felt this gave him a better image of legitimacy. He really didn't need it. Even if romanticized, this will give you a good look at his life and the lives of cowboys in different regions of the West. And, as usual, the drawings depict what he observed. Item 24. $300.

Of all his books, this is the one for which James is best known. Item 77 is a first edition, first printing of Smoky, published in 1926. Smoky is a wild horse, captured and trained by a caring cowboy. They become close, but Smoky is taken by a horse thief. He is abused, becomes hateful toward humans, attacks his owner, is again captured by humans and used as a rodeo bucking bronco because of his dislike of humans. When he gets older and retired from the rodeo, he is taken by another abusive owner. Eventually, he is discovered by the cowboy owner who gradually brings him back to his earlier personality in old age. The book recounts Smoky's life from the horse's perspective. It won the Newbery Award and was made into a film three times, in 1933, 1946, and 1966. The first featured Victor Jory, the second Fred MacMurray, the third Fess Parker. It must be getting time for a new revival. This copy is another in exceptional condition, dust jacket included. It came from the collection of Estelle Doheny, one of the greatest collectors of the 20th century. You can be sure this is an outstanding copy. Item 77. $3,500.

Here is another first edition, first printing of Smoky, this one in a clamshell box, with another notable feature. It has been inscribed by James to a contemporary, cowboy poet Chuck Haas. James inscribed it in 1926, the year of publication, “To Chuck Haas 'Mi Amigo.'” Inscribed and signed first printings of Smoky are rare. Item 127. $750.

Will James was not an adult writer or a children's writer. He was both. This next one is a book he wrote specifically for children, My First Horse. This one is also in excellent condition, rare for a children's book, the young ones taking a toll on their books. I have not read it, but based on James' cover art, that first horse was a rocking horse. Published in 1940. Item 40. $3,000.

We will conclude with the final Will James book published during his lifetime. Item 42 is The American Cowboy, published in 1942. It covers three generations of cowboys, from the time when the range was open and cattle drives took them to the railroads. By the third generation, the range had become fenced, farmers arrived, and cattle remained on ranches. The book concludes with James' last line - “the cowboy will never die.” James passed later that year. Item 42. $225.

The Great American Cattle Company can be reached at 719-338-0125 or kithaddock@mindspring.com. They are located in Palo Pinto, Texas.