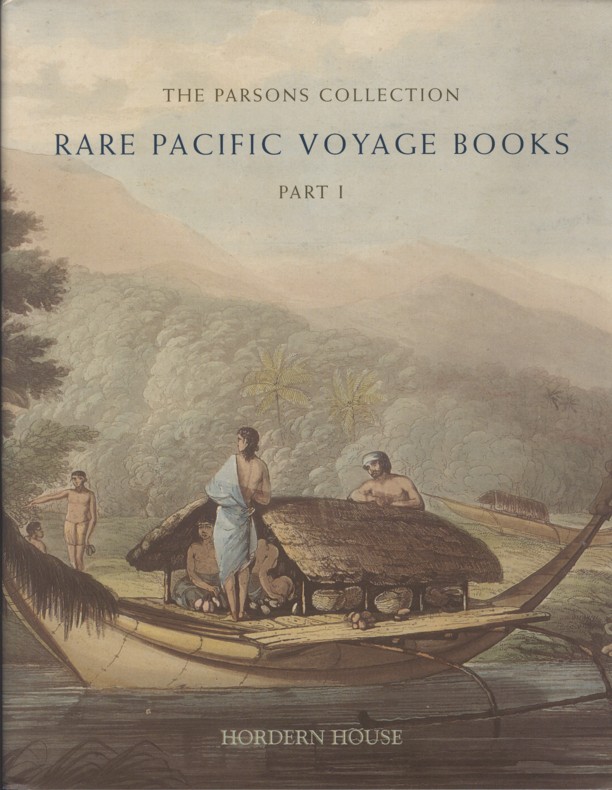 Is this a catalogue? Technically yes, but Hordern House has created something on a far different level. It is a book itself, a tribute to the Pacific voyage collection of David Parsons. Parsons has put together a magnificent collection of Pacific voyages, but has now chosen to focus on Spanish and Portuguese expansion starting at the time of Columbus and the still earlier texts on which they relied as they began their explorations. Therefore, he has decided to put his extraordinary Pacific collection on the market. The result is this catalogue-book, and it is worthy of the collection it describes. A hard-cover, quarto book, it includes 138 thoroughly described works, richly illustrated, with an image from John Harris' 18th century compendium of voyages on the dust jacket.

The title of this catalogue is The Parsons Collection. Rare Pacific Voyage Books. This is only part one, covering the period from Dampier to Cook. The second part, to be published during 2006, will cover the post-Cook period (1780s) to the mid-19th century.

David Parsons is an Atlanta, Georgia, collector, roughly half of the globe away from Hordern House, of Sydney, Australia. In the catalogue, he explains his own collecting career. It starts with a fascination with the novels of Patrick O'Brian, who wrote fictional tales of the sea, including one based on the voyage of George Anson. Parsons decides to attend the New York Book Fair while on a business trip to that city and picks up a few titles. Undoubtedly, other book collectors will understand what follows. The collecting becomes more serious, the collection broader, and the importance of the material more pronounced. Starting with titles strictly in English, it spreads to first editions in many languages. A major collection of Cook material is put together, while chronologically, the Cook era collection spreads back to the 17th century and forward to the mid-19th. Then there comes an interest in association copies, and a desire to find books in the finest condition. It is a process, no obsession, that many a book collector has been through. At its end, there is a magnificent library. As with other great collections, the time comes when it is dispersed. The Hordern catalogues will remain a monument to this fine library, and one can be confident that the provenance of having been a part of the Parsons Collection will follow each title to the next library it graces.

Item 17 in the catalogue is a first edition of the account of the aforementioned Anson's journey, A Voyage Round the World...By George Anson, Esq... published in 1748. This is a rare, thick paper copy, with the signature of John Phillipson, who shows up on the list of subscribers as having subscribed to a "Royal Paper" copy. Phillipson is not identified, but we would presume he is the same John Phillipson who served as a commissioner of the British Navy at the time. George Anson set out with six ships in 1740 to harass the Spanish along the coast of South America. Five of his six ships did not complete the voyage, being either wrecked or forced to return. Most of his men died, primarily of disease. However, luck would be with Anson, if not most of his men. With his one remaining ship, he was able to capture a Spanish vessel loaded with enormous treasure, and he would conclude the trip by circumnavigating the globe, returning home a wealthy man. Copy priced at $27,500 Australian (US equivalent of approximately $20,685). For those preferring languages other than English, items 18-20 are copies in French, Russian, and Italian.