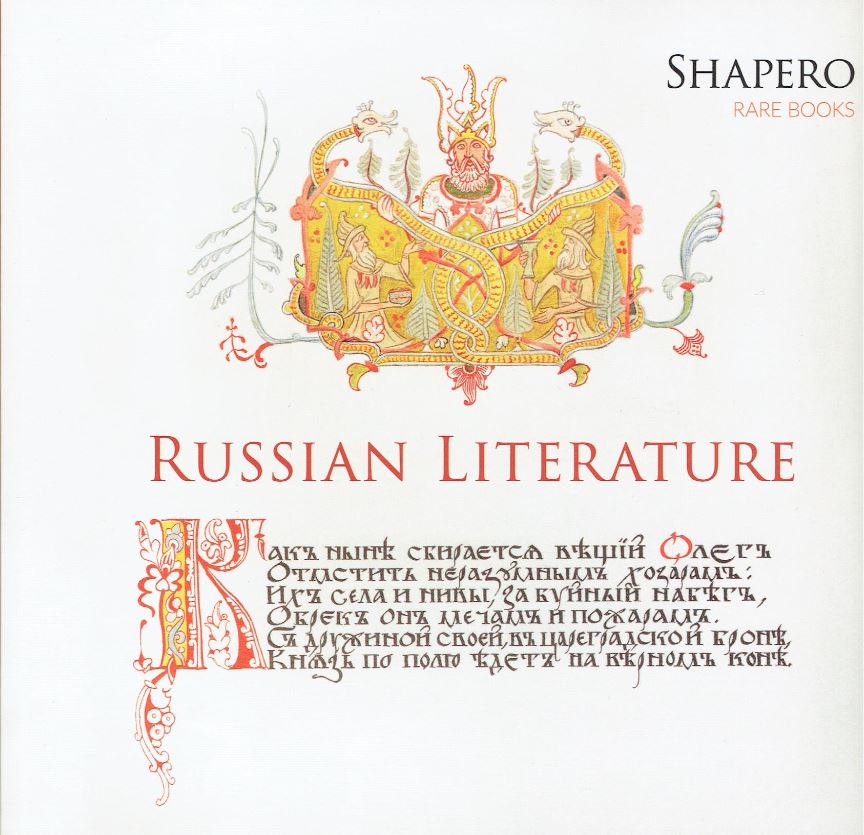 Shapero Rare Books has published a catalogue of Russian Literature. There are names here that will be recognized even by those not terribly familiar with Russian writers – Tolstoy, Gogol, Pasternak, Solzhenitsyn, Pushkin, Nabokov, Gorky, Dostoevsky, Chekhov. Other names may not be familiar to most in the West but will be known to those more acquainted with the genre. There are also some books here by well-known Western writers in Russian editions, as well as English or French translations of Russian works. As a note, the majority of books are in Russian, that is, they are written in the cyrillic alphabet, which we cannot duplicate. Here are a few selections among these works of Russian literature.

Vladimir Nabokov was a multilingual writer, though not one who would occasionally write in a second language. Rather, for half his life he wrote in one language, and the second half in another. There is a logical explanation. He was a Russian native, but after the revolution, he moved to England, then Germany, then for a short time France, and finally to America to avoid the Nazi invasion. During his years in Russia, and still in Germany, he wrote in Russian. After he moved to the United States, he switched to English, in which he wrote for the remainder of his life. He produced many respected works in both languages, though his most famous one is the English novel Lolita. Item 45 is (translated to English) The Gift. Nabokov wrote it in the 1930s in Berlin, but it was censored from the Russian emigre journal. It was published, in Russian, in New York in 1952. This was the last novel he wrote in Russian and is considered a farewell to the world he left behind. Shapero notes it is “an ode to the greats of Russian literature. Each chapter follows the style of a Russian author, including Pushkin, Gogol, and Saltykov-Schedrin.” Item 45. Priced at £500 (British pounds, or approximately $658 in U.S. dollars).

Next is one of the great masterpieces of Russian literature that had the misfortune of being written during the Soviet and Cold War era. The title is Dr. Zhivago, the author Boris Pasternak. It follows the tragic love affair of the title character and Lara Guichard through the period of World War I and the Russian Revolution. It was many years in the writing, finally completed in 1955. Pasternak submitted it for publication in Russia but was turned down by Soviet authorities. It did not portray the Revolution and Soviet government in the properly fawning manner. Pasternak had previously been in tense situations with the state, but had been left alone because of his reputation as a great writer. At the urging of a visiting Italian communist, he turned over a manuscript of Dr. Zhivago for publication in Italy. Item 51 is the first UK edition, published in 1958. The book became an enormous popular and literary success, winning a Nobel Prize for literature. Khrushchev and the Soviet authorities were not amused. They could not readily send such a prestigious writer to the gulag, so instead, they threatened him with deportation. This was almost the same to Pasternak whose whole life and family were in Russia. He was forced to decline the Nobel Prize. The affair put great pressure on Pasternak's health and he died in 1960. In the days of the falling of the Soviet Union, Dr. Zhivago was finally published in Russia, his descendants allowed to accept his Nobel Prize, and the book is now read in Russian schools. Item 51. £1,200 (US $1,554).

Following up on the story of Pasternak's difficult last years, item 53 is a samizdat of Pasternak's new poetry written from 1945-1957. A “samizdat” is a hand-prepared writing of material that could not be published in the Soviet Union because of censorship. Creating or reading such banned material put the possessor at great risk. Known as the “Green Notebook,” this could only have existed in a small number of copies. This one was given by Pasternak to Georges Nivat, a French student studying in the Soviet Union who was engaged to Pasternak's adopted daughter, Irina Ivinskaya. After Pasternak's death, Soviet authorities dealt harshly with his family. Nivat was deported two days before the planned wedding and prevented from returning for many years. Irina and her mother were sent off to a labor camp, Irina for three years, and she married a man she met there after their release. Nivat loaned his copy of the Green Book to a cousin of Vladimir Nabokov, who wanted to compose romances based on Pasternak's poetry, but he died before the book could be returned. Nivat thought it had been lost until recently told by Shapero that they had it. You can read the complete history in this catalogue. £27,500 (US $35,762).

Next we have a look at Russia through the eyes of a Frenchman. Astolphe Marquis de Custine traveled to Russia for four months during the summer of 1839. He was a monarchist and expected his visit to Nicholas I would confirm his views. Instead, it did just the opposite. He was appalled by the government's behavior. He reports that “the Russian government is an absolute monarchy tempered by assassination.” Custine instead supported a constitutional monarchy. He also predicted that the nation would see a revolt as a result of its behavior. It took a long time for that revolution to come, but when it did, it was on a scale beyond anything the Tsar anticipated, changing the world order for almost a century. The book's title is La Russie en 1839 (Russia in 1839) and was published in 1843. It was enormously popular, going through numerous translations and 18 editions, some counterfeit, between 1843-1855. Offered is a copy of the rare first edition. It was composed as 36 letters sent back home. However, he did not send them for fear they would be seized, carrying them back instead. That was a reasonable fear as his book was banned in Russia until the 20th century. For this work, Custine is frequently called the Tocqueville of Russia. Item 20. £3,250 (US $4,271).

We return now to another of the greatest Russian writers, Fyodor Dostoevsky. Dostoevsky also spent years in a Russian prison camp, but this was in tsarist rather than Soviet times. Russia has never been a safe place to express your thoughts, any more than it is again today. Item 24 is Crime and Punishment, the 1886 Vizetelly edition published in London. This is a first edition of the first translation to English of Dostoevsky's novel, preceding the American edition by six months. It is a tale of a poverty stricken young man who kills a pawnbroker for her money, and then proceeds to reap the consequences, not so much the legal ones as the psychological and moral ones from his guilt. £9,000 (US $11,831).