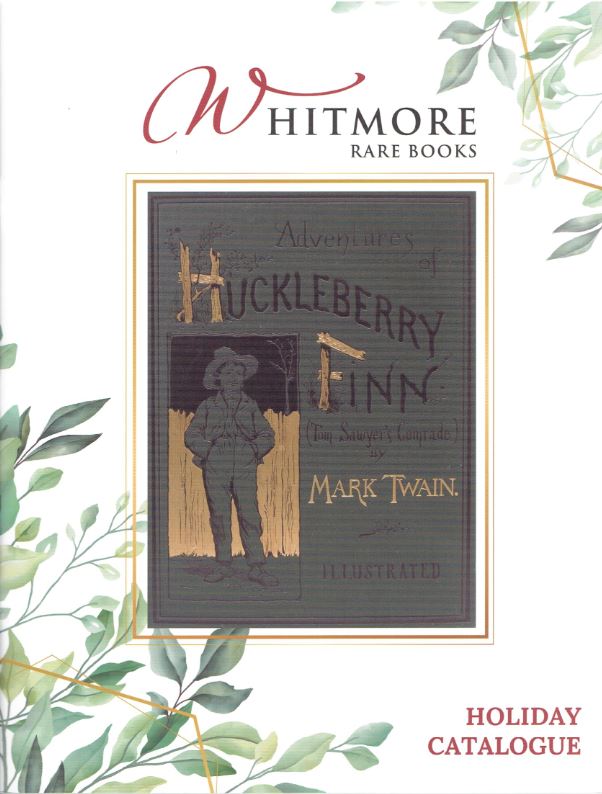 Whitmore Rare Books recently issued their Holiday Catalogue. While they don't specify a topic, it is filled with great literature. Novels are the largest part of the selection, but there is also some history, sport, poetry, home and garden books, and children's books. These are significant works and their condition is highly collectible. These are a few.

No list of great American writers can not contain the name of John Steinbeck. His novels, primarily set in California, provide some of the most realistic portraits of individuals ever put to text. He wrote during the middle of the twentieth century, which included the Great Depression. His novel, The Grapes of Wrath, written during that hard time, is likely the best portrayal of that era ever written. However, after the war, Steinbeck wanted to write something more upbeat, which takes us to this book, Cannery Row, published in 1945. It is also set during the Depression, on Cannery Row, a street along the California coast in Monterrey. It was so called because of the sardine canneries located along the street. The book follows the lives of several people living in the area and their attempts to return the favors of a character based on Steinbeck's close friend, marine biologist Ed Ricketts. Some are down and out, and undoubtedly would be even if it weren't the Great Depression, but people get by. In the years since this book was published, the sardines have gone away and the canneries closed down. The street, which was then officially Ocean View Avenue, was renamed “Cannery Row,” and it has become a tourist attraction, based largely on the association with Steinbeck's novel. Item 76. Priced at $1,500.

This is one of the foundational works of the modern environmental movement. Item 13 is Silent Spring, by Rachel Carson, published in 1962. At the time, few people were aware of the extent of the environmental damage being caused by chemicals, in this case, pesticides in particular. DDT was the most used insecticide then and it was not only killing insects, but birds as well. DDT would get into the birds' food supply. It altered their calcium balance, with the result being their eggshells were thinner. They would break before they could hatch. Carson's book brought this to the attention of the public, leading to pressure on the government to take action. Within a few years, DDT was banned and the government created the Environmental Protection Agency. $750.

Here is another influential book, even more so, published a century earlier. Item 81 is Uncle Tom's Cabin; or, Life Among the Lowly by Harriett Beecher Stowe, published in 1852. This one hardly needs introduction. It is the story of slave life in the South before emancipation. There were already many people in the country opposed to slavery on intellectual grounds, but it was Mrs. Stowe's novel that truly portrayed the practice in human terms. Stowe had been inspired to write her novel by the passage of the Fugitive Slave Act, that forced people in non-slave states to participate in the practice by requiring they return runaway slaves to their masters. Uncle Tom's Cabin stirred great moral outrage and determination that slavery needed to be abolished. Printing and the Mind of Man says of this book, “the social impact of Uncle Tom’s Cabin on the United States was greater than that of any book before or since.” This copy includes a letter written by Mrs. Stowe in 1889 in response to a letter from an autograph seeker. She received many of these, but by this point was suffering from dementia and needed much help from her daughter in providing these responses. $6,500

Britain's most notable traveler, explorer, adventurer of the nineteenth century was Richard Burton. He visited numerous places in the Middle East and Africa, including one to find the source of the Nile, even once went to America to visit Salt Lake City. Among his most important and dangerous was a visit to Mecca during the Hajj, the annual pilgrimage to the Holy City Muslims are expected to make sometime in their lives. The problem is that only Muslims are allowed to visit the Holy City and Burton was a Christian. For non-Muslims to attempt this journey was to put their lives at grave risk. The result was that Burton needed not only to learn the language, accent, and the religion, he had to learn the customs, dress, and the habits of a Muslim, in his case, that of an Afghan Muslim whom he was attempting to impersonate. Burton was a learned and clever man and somehow managed to pull it off without being exposed. He made his journey in 1853 and in 1855, published this account of his trip, Personal Narrative of a Pilgrimage of El-Medinah and Meccah. Item 10. $5,000.

This is the autobiography of a President who rarely shows up on people's lists of the greatest or their favorite Presidents. However, he was high up on Ronald Reagan's list and of some others of conservative leanings. Item 16 is The Autobiography of Calvin Coolidge. “Silent Cal” certainly fit the model of a conservative. He inherited the presidency in 1923 when Warren Harding died in office, ran successfully in his own right in 1924, and left office in 1929, declining to seek reelection. Coolidge promoted tax cuts, was somewhat isolationist in foreign policy, and opposed extensive government programs and involvement in the economy. It came from his own values of hard work and frugality. It is ironic that he served in a period when the dominant ethic was the opposite – the Roaring Twenties. Coolidge disapproved of such behavior, but did little to curb its excesses. The result of such economic behavior would be left for his successor, Herbert Hoover, to handle a short time after his exit in early 1929. Timing is everything. In his autobiography, Coolidge describes his life in the years both before and during his presidency. Published in 1929, item 16 is part of a signed limited edition. $1,250.