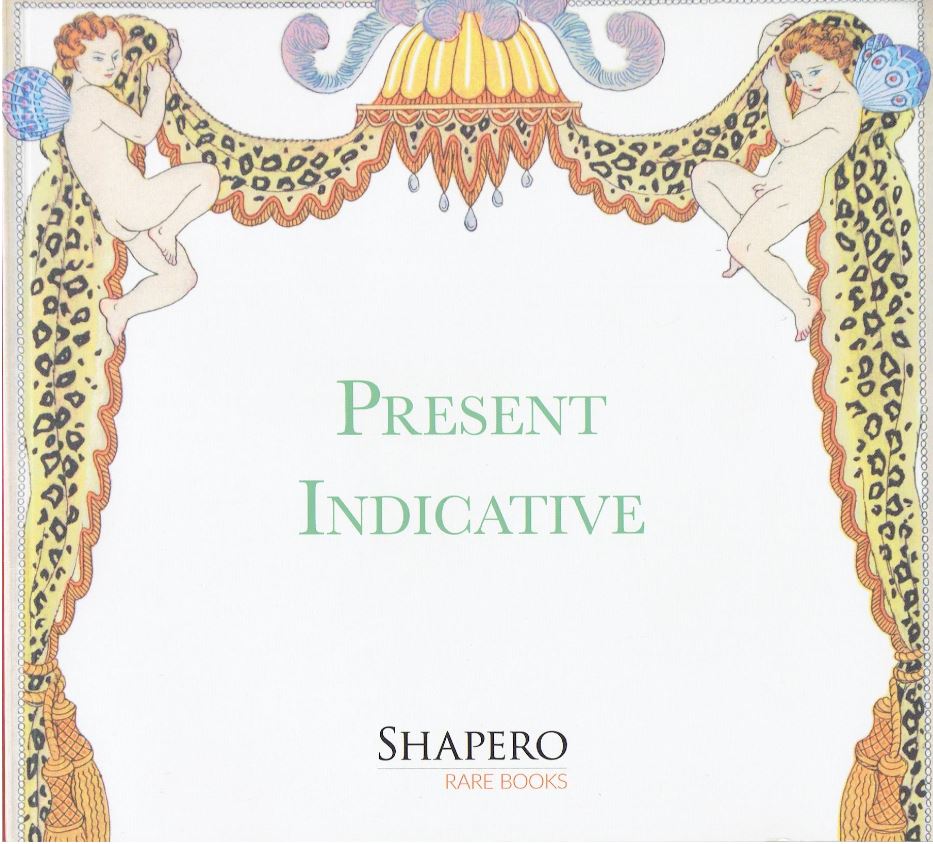 Shapero Rare Books has issued a catalogue entitled Present Indicative. That title needs some explanation, but unfortunately, I can't provide it. My guess is it has something to do with presents since this is the holiday season. What I can provide is their table of contents, as that is indicative of what you will find. Here it is: Fiction, Poetry & Prose; Children's & Illustrated; Visual & Performing Arts; Special Interest & Sport; Judaica; and Modern Prints. These are a few samples of the specific items here.

We will start with a book that ties two authors with nothing I can discern in common other than both used fake names. One was the great American humorist, the other one of the most notable of twentieth century mystery writers. The humorist was Mark Twain, although that was not his actual name. He was Samuel Clemens. The other was mystery writer Ellery Queen, along with less well-known mystery writer Barnaby Ross. Queen and Ross were pseudonyms for cousins and co-authors Frederic Dannay and Manfred B. Lee. To take it even further, those were fake (professional) names, Dannay born Daniel Nathan and Lee was Manford Lepofsky. The book is the Twain/Clemens' classic The Adventures of Tom Sawyer. This is a first American edition, second issue (on laid rather than wove paper) published in 1876. Shapero describes this as a “stunning copy” with a “distinguished pedigree.” The earlier provenance included classics scholar and poet Mitchell S. Buck and modern firsts collector Christian Heuer. However, most notable are the signatures on the half-title of “Ellery Queen” and “Barnaby Ross.” In reality, the owner of this copy was Frederic Dannay. Item 65. Priced at £8,500 (British pounds, or approximately $11,166 in U.S. dollars).

The B.B.C. Handbook was an annual publication of the British Broadcasting Corporation from 1928-1987. They weren't mere program guides but a summary of new developments in both technology and at the BBC. As such, these ran several hundred pages in length. Item 103 is the first of these handbooks, B.B.C. Handbook 1928. It includes a section on programming, including both music and “spoken word.” Naturally, this was all radio at the time. It then goes on to extensive sections on engineering, broadcasting around the world, and other features of what was still a recent technological invention. The book is also filled with advertisements, primarily for receivers and various assorted high-tech products. They are fascinating to see today. The cover features a multicolored (or should we say multicoloured) lightning bolt type of symbol, indicative of modern electronic technology. £580 (US $742).

This writer is not thought of as a philosopher, but when you achieve great fame in one endeavor, you can get away with intrusions into someone else's field. Item 110 is The Philosophy of Andy Warhol (From A to B and Back Again), who is known more for his creative artwork more than his textual thoughts. This is a humorous look at a variety of topics by the philosopher-artist, including fame, success, love, beauty, sex, death, art, and economics. We understand that Warhol had some assistance in writing this book from his secretary. This copy is a 1975 first edition and is inscribed to “Estelle.” He has added a rough outline of his famous Campbell's Soup can. This is not a rare item. Warhol evidently had a whole lot of friends to whom he inscribed copies of his book, and he knew the greatest source of his fame as many of these inscribed copies have soup can drawings. Nonetheless, Warhol is so popular, and his art brings such fantastic prices, that anything by him is highly collectible. £3,000 (US $3,940).

Next we have a book of portraits not likely to be all that popular with Americans. Item 133 is Portraits of the Whole of the Royal Family, Engraved from Original Pictures, by Her Majesty's Most Gracious Permission, published in 1806. The original portraits were by various artists. There are 21 hand-colored portraits of the family of King George III. He was the King so despised by Americans that they undertook a revolution to be free of him. By this time, George was becoming a sad figure. He had had bouts of mental illness as far back as the 1780s as he would go in and out of rational behavior. By 1810, he would have to be shunted aside and his son made regent for the rest of George's life. £950 (US $1,248).

Next we have a family photograph of an American leader, but he too is is not well loved by Americans. It is a photograph of the Nixon family from their presidential years, President Richard Nixon, First Lady Pat Nixon, daughter Patricia Nixon, daughter Julie Nixon Eisenhower, and son-in-law David Eisenhower. From the happy looks on their faces, one presumes this picture was taken before they realized how the Nixon presidency would end. It is inscribed “To the Harold Wilsons With warm regards and best wishes from their friends.” It is then signed “Dick Nixon” and “Pat Nixon.” Harold Wilson was British Prime Minister from 1964-1970 and again from 1974-1976. Nixon and Wilson's terms overlapped from January 1969 – June 1970. The photograph came from estate of the Wilsons. Item 149. £4,750 (US $6,240).

Here is the denouement to the controversial story of the life of Charles Darwin, a final piece for your collection. It is a ticket to Darwin's funeral. It announces Funeral of Mr. Darwin, to be held at Westminster Abbey. The funeral was scheduled for Wednesday, April 26th, 1882, “at 12 O'clock Precisely.” It will “Admit the Bearer at Eleven o'clock to the South Transept.” Interestingly, it concludes, “N. B. - No person will be admitted except in mourning.” Were they concerned that religious zealots who hated Darwin for his theory of evolution would come and disrupt the service or celebrate? Item 125. £4,500 (US $5,809).