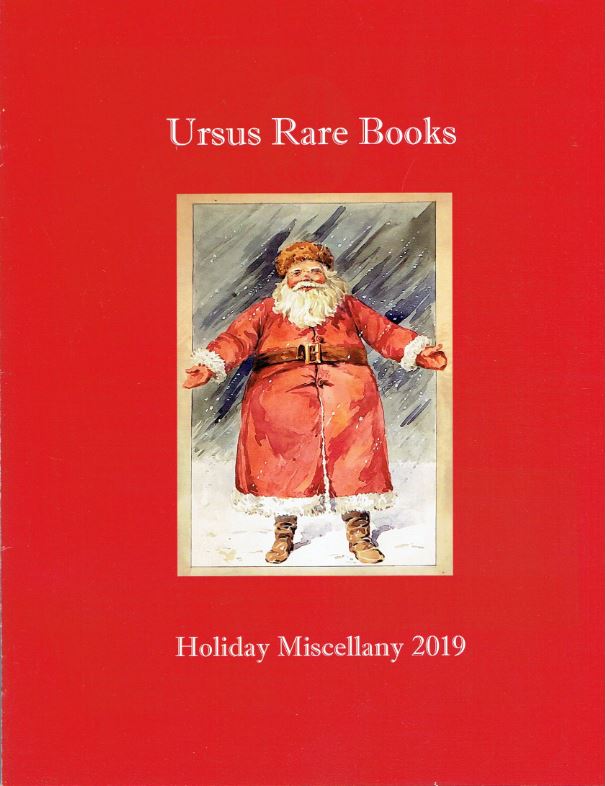 Ursus Rare Books has created a Holiday Miscellany 2019. The holidays may be almost over, but the books are as good as ever. Books age well. A miscellany is hard to describe with words that aren't simply synonyms, like “variety.” Most of what is here can be described as in some way artistic, though they may be such things as artfully presented sales catalogues rather than obvious artwork. Then again, there isn't much beauty in a book about the rise of Hitler and Mussolini, so I guess we better just stick with miscellany for the description. Here are a few of these miscellaneous books.

If you are planning a trip to Rome, Ursus has a New Guide of Rome, and the Environs, Naples and their Environs... Despite the title, it isn't exactly new. It was published in 1853, but it was new then. This is a guide to the city and its ancient monuments prepared by Mariano Vasi and updated by Italian archaeologist Antonio Nibby. This was the “mandatory nineteenth century guide to Rome,” published in several editions and different languages. It contains 532 pages with 28 plates and a folding pocket map. It provides a day-by-day itinerary for an eight-day visit to the city. Item 45. Priced at $975.

From architecture dating back two millennia we switch to more modern artists. Item 31 is New York: The New Art Scene. This book features 500 photographs of the New York art scene in one of its most vibrant and revolutionary times – the 1960s. The photographs were taken by Ugo Mulas, an Italian photographer noted for portraits and candid scenes. This is his most notable work. During his trip to New York, he visited the studios of numerous artists. While Mulas' name may not be very well known, those of the artists he visited is a who's who of the era – Marcel Duchamp, Roy Lichtenstein, Andy Warhol, Jim Dine, Jasper Johns, Frank Stella, Robert Rauschenberg, and many more. The text was provided by Alan Solomon, an art professor, exhibition organizer, and critic deeply involved in the “scene” at this time. Published in 1967. $2,750.

Here is a work by another artist, also in New York, though three decades earlier. It comes from the unusual artist, Salvadore Dali, but this is unusual even by his standards. It is not a work of art, though it is somewhat surreal. It is a sheet folded to create a four-page pamphlet headed Declaration of the Independence of the Imagination and the Rights of Man to His Own Madness. It was a protest by Dali against a decision by the organizers of the 1939 New York World's Fair. Dali was participating in the 'Dream of Venus' pavilion, a surreal undersea grotto. It featured such unusual attractions as semi-naked women playing the piano and milking cows in water tanks. You know, just normal stuff. Dali had an idea for the entrance to the pavilion, an image which is reproduced in this pamphlet. It was sort of a reverse mermaid. It displayed the naked body of a woman with the head of a fish. We can describe her as semi-beautiful. The fair's organizers didn't much like Dali's idea, insisting it be replaced with a more traditional version of Venus. The artist was not pleased. He expressed his distaste written in a form similar to the Declaration of Independence (“When, in the course of human culture, it becomes necessary for a people to destroy the intellectual bonds that unite them with the logical systems of the past...”). Dali believed his vision had been compromised and he railed against the mediocrity of art by consensus. Item 15. $750.

This is a first, or at least a part of one. William Caxton was England's first printer. His greatest book was that nation's most important writing up to that time, which was 1476 or 1477. That is the Canterbury Tales of Geoffrey Chaucer. If you wish to buy this book, good luck. There are only around a dozen known copies, and we have not been able to trace any copies at auction in over half a century, and even then it was a seriously defective copy, missing many pages. What you can still find are individual leaves, and this is one. This leaf comes from the Knight's Tale, the first of the Canterbury Tales. Caxton's Canterbury Tales was the first book in English published in England. Item 10. $7,500.

Next we have a dealer's showroom catalogue for the Chevrolet for 54. America's first choice car. This is a first edition of Chevy's 1954 dealer showroom catalogue, published in 1953. It contains over 200 color illustrations, including some folding plates. There are 12 bound-in paint samples and 60 upholstery samples. There were several updates in 1954, including a wider grill, but this would be the end of an era in Chevy styling. In 1955, Chevy introduced its first V8 and a totally new look. The mid-1950s brought a sleeker look to cars and Chevrolet was no exception. The rounded lines cars had adopted in the 1930s were replaced with straighter ones. You can describe them as either streamlined or boxy, depending on whether you like them. Whichever, 1954 was the end of a line. Item 13. $1,500.