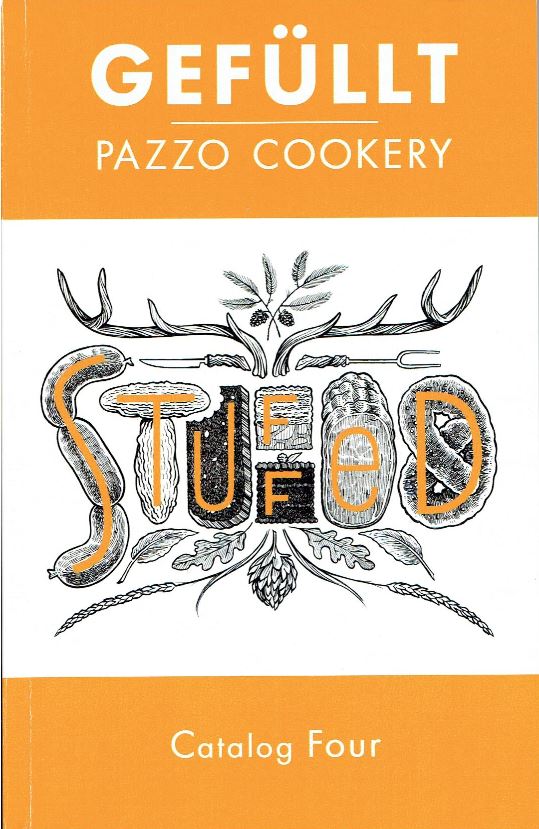 Pazzo Books has published their Catalogue Four – Pazzo Cookery. The alternate title is Gefüllt, which has a double meaning here. It is German for “stuffed,” that is stuffed in the sense of eating too much. That makes perfect sense considering all of the cookbooks and recipes in here. However, the catalogue is also stuffed in that it is filled with cooking related books, manuscripts, and various sorts of ephemera. However, Pazzo admits that the small number of German books presents a “flimsy pretext” for using a German term. That is true. Outside of the dominant books in English, there are also a great number of Mexican cookbooks and recipes. If you are looking for authentic Mexican recipes, rather than what you find on the menu at Taco Bell, this is a great place to look. Does anyone know the Spanish equivalent of gefüllt? Here are a few selections from the cookery.

We will begin with a collection of over 500 recipes for those who favor Mexican food. Actually, it has more than just Mexican food, but that is not surprising because the compiler of these recipes was a Mexican diplomat, an ambassador to France, Chile, Canada, Guatemala, and Venezuela. He also held numerous offices within his homeland. His name was Luis Ignacio Rodríguez Taboada, and of all the offices he held, he is most noted for his time as ambassador to France, from late 1939 to early 1942. It was the time of the German invasion of France and the establishment of the Nazi occupation and the collaborationist Vichy regime. Rodríguez is remembered for his attempt to save as many Spanish exiles as he could during that time, which unfortunately, was not very many of them. The Spanish Republic recently had been overthrown by Franco's fascists. Many of those who fought for the Republic escaped to France, only to find that country being overrun by hostile Nazi allies of Franco. During this period, Rodriguez attempted to provide asylum in Mexico for these refugees, Mexico being willing to accept them. Unfortunately, the Nazis and collaborationist government opposed providing refuge, wishing to send their leaders back to Spain for trial. Only a few thousand out of 100,000 refugees were able to escape. Rodriguez was able to protect the former Republican President by housing him on Mexican property in France until his death of natural causes in 1940. With that introduction to this fascinating recipe collector, we can say that the recipes are housed in seven volumes, most being typed. While most recipes are for Mexican dishes, there are also South American, European, and other foods to be found. Among them are very un-Mexican dishes representative of his travels, including gulash, curry, French onion soup, mince meat, sukiyaki, roast beef sandwiches, tongue with horseradish, stroganoff, and hamburgers with potato salad. Item 21. Priced at $1,500.

Next we have a book that is generally regarded as the second American cookbook, and the first from New York. The title is New American Cookery, or Female Companion. The author is identified only as “An American Lady.” It was published in 1805, preceded only by that of Amelia Simmons in 1796. Indeed, the first 94 pages are a reprint of Simmons' book, without alteration or attribution. Following sections are also cribbed from other authors. No wonder the lady wanted to remain anonymous. This copy has its defects, or as Pazzo says, an “unfortunate copy.” Several pages are missing and it is otherwise in less than stellar condition. Nonetheless, this is a very rare book, rarer than that of Ms. Simmons, with its price reflecting its defects. Item 95. $950.

This book contains more original content. The title is The House Servant’s Directory, Or A Monitor For Private Families: Comprising Hints on the Arrangement and Performance of Servants' Work. The author of this 1827 book was Robert Roberts. Roberts was the butler for Governor and Senator Christopher Gore of Massachusetts. This book is considered the first cookbook written by an African-American and the first commercially published book by an African-American. It contains not only meal recipes, but lots of other household hints for butlers, servants and others. Roberts was of the belief that there was more happiness in performing your work for another with integrity than being an employer who treated workers unjustly. In later years, Roberts was known for promoting the cause of abolition. Item 97. $16,500.

This one goes way back, over five centuries. It is an incunable, having been published in 1496. The title is Scriptores rei rusticae and it is the work of Roman writers Cato, Varro, Columella and Palladius. They wrote on subjects pertaining to agriculture and rural life, including such topics as crops, vines, bees, olives, cattle-breeding, cakes, preserving ham, customs, superstitions, and “rural wisdom” such as eating cabbage with vinegar before drinking as this will allow you to drink as much as you like without getting drunk. Sounds dubious, but I have never tried it, so maybe. Item 35. $8,500.

Where better to look for a cookbook than a railroad company? Well, maybe there is someplace better, but here is one from the Rock Island Line. It's a mighty fine cookbook. Its title is The Great Rock Island Cook Book and it was dedicated to the women of America by the Rock Island & Pacific Railway in 1883. It says “many famous cooks and caterers” contributed to the recipes, but only a few are attributed. Recipes include those for mutton, ice cream, pickles, pies, mock turtle soup and more. Now we know what the Rock Island Line did with all those pigs and horses, cows and sheep. Item 106. $750.