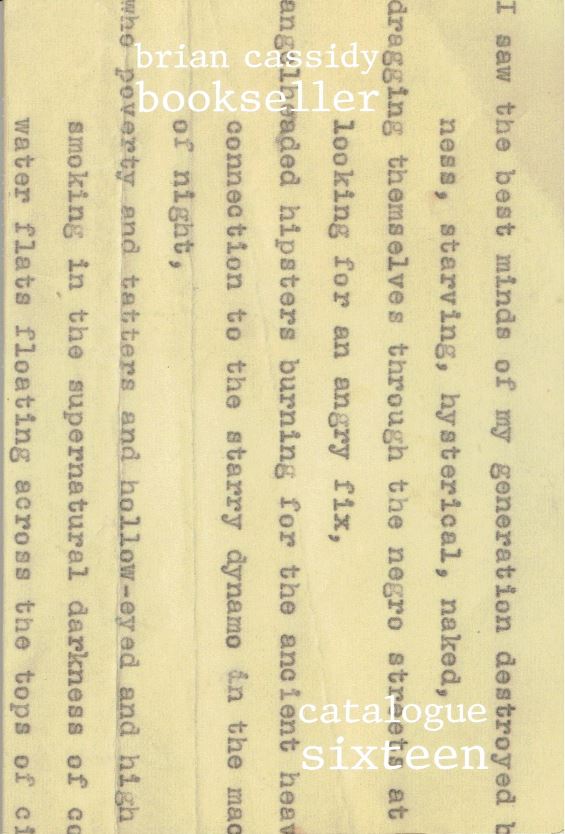 Brian Cassidy Bookseller has issued Catalogue Sixteen, or Counter-culture(s). That sort of describes the material herein though not all quite fits that appellation. Perhaps unusual or uncommon, maybe different, describes some items, though counterculture is certainly in the forefront. Written and visual artists whose works are other than realistic or photographic are certainly to be found. Political thought is not mainstream. Living arrangements other than a suburban house with 2.3 children can be found. However, there are a few scientific items here and even a normal sort of psychological work by Timothy Leary in the years before he drifted off into outer space (or spaced out). These are a few selections from these representatives of nonstandard thought.

Certainly one of the favorite topics of the counterculture, at least the artistic rather than political side, is sex. Not that this isn't as interesting to regular folks, just that the counters were more willing to discuss it openly. That said, this broadside isn't really countercultural, and has to be the most unsexy sex related piece imaginable. Seriously, its screaming headline shouts WARNING. It was produced by Julius Schmid, Inc., circa 1940s. The “friendly warning” is targeted at competitors rather than consumers. It concerns the sale of “prophylactic rubber goods,” what we know as condoms or rubbers. It seems that as a young man, Mr. Schmid ran into the Comstock law when selling these particular rubber goods and spent some time behind bars. He now warns others, likely because he was selling through legal channels and didn't want illegal competition. Condoms had once been totally illegal, but in 1918, New York legalized them, but only if prescribed by a doctor, and only to prevent disease, not children. The flyer warns, “your community is one of a great number in which a local ordinance specifically provides that the legal sale or distribution of such articles must be confined to licensed physicians and drug stores only...[R]efusal to obey the law will most certainly result in prosecution.” Schmid manufactured some of the most popular brands of condoms not named “Trojan” - Sheik and Ramses. Item 33. Priced at $375.

Here is a classic program from early 1969 for a rock concert in London. It announces Roy Guest Presents, and then in large letters, Tyrannosaurus Rex. If that doesn't sound familiar, within a few months the band shortened their name to T. Rex. It includes lyrics from the songs in a couple of their albums. The cover notes that they are “in concert with John Peel.” Peel was a popular BBC disc jockey. It continues, in small type, “and Vytas Serelis – Sitar.” This was the Beatles' Maharishi period, which explains the presence of the sitar player (who is now better known as a visual artist) on the program. And then, finally, in small type at the bottom, is a non-musician. It concludes, “and David Bowie – Mime.” Yes, there was a time when Bowie made a living by keeping his mouth shut, rather than singing. He was reportedly talented at it, but not a Marcel Marceau, so therefore he had to become David Bowie instead. Item 15. $1,250.

Now here is an item that is definitely counterculture. It is a mail order catalogue - 1978 Catalogue - with an addendum of cocaine accessories. It was published by Brother Bob Productions of Hollywood. Brother Bob describes him/itself as “the leading innovator of 14K solid gold and non-gold Cocaccessories.” There's a new word. Cassidy points out that “the first 11 pages showcase glistening razor blades, coke spoons, pipettes and vials, all made of, plated in, or adorned with gold.” Later pages feature literature such as The Gourmet Cookbook and The Pleasures of Cocaine, and then offer non-gold items such as glass jars, ziploc bags, plastic cards, strainers, spatulas, pestles, funnels, mirrors, and scales in velvet and silk lined leatherette cases. The Addendum adds such useful items as a solution to soothe nasal membranes and the Coke lover's equivalent of the Swiss Army Knife, the “Absotootly” - “It's a tooter, it's a spoon, it's a spring-loaded straw.” Item 46. $500.

This is a book by a Swedish scientist who recognized what some today think is the world's greatest threat, only he saw it over a century ago. The scientist was Svante Arrhenius, and in 1901, he published Ueber die Warmeabsorption Durch K Ohlensaure und Ihren Einfluss die Temperatur der Erdoberflache (on the absorption of heat by carbon dioxide and its influence on the temperature of the earth's surface). In 1901, Arrhenius realized the threat of global warming. His work was based on explaining the ice ages, and the role of the amount of carbon dioxide in the atmosphere in causing and ending them. However, he took it a step further, recognizing that human activity could also cause the amount of atmospheric oxygen to rise, which in turn would raise temperatures. He also understood that the burning of fossil fuels and other forms of combustion was a source of additional carbon dioxide. While his formula for relating carbon dioxide and global temperatures was incorrect, he was correct is seeing the relationship, and what he foresaw as a possibility then has come to pass in the last few decades. Item 49. $1,500.

Item 62 is a bit of a strange title, but the pamphlet is a serious work. The title is Women Against Electric Shock Treatment. It was put together by two women medical professionals, and two women who were patients of electric shock treatment. They had originally appeared on a public television program in the San Francisco Bay area, with this being a companion piece. It is a transcript of their televised discussion with illustrations taken from psychiatric journals. They vehemently voiced their opposition to the practice, taking it from a specifically feminist viewpoint. The introduction states, “Electric shock treatments are part of the mental health system that makes women feel 'crazy' when we become dissatisfied with our roles as defined by society.” $250.

We will conclude by mentioning the first item in the catalogue without detail because any potential buyer of this item will want to read the detailed description in the catalogue (Cassidy devotes 9 pages to it). It is a previously unknown, and only privately held carbon typescript of the most notable of counterculture poems, Allen Ginsburg's Howl. He read the poem from this draft at Reed College in Oregon in February 1956. $425,000.