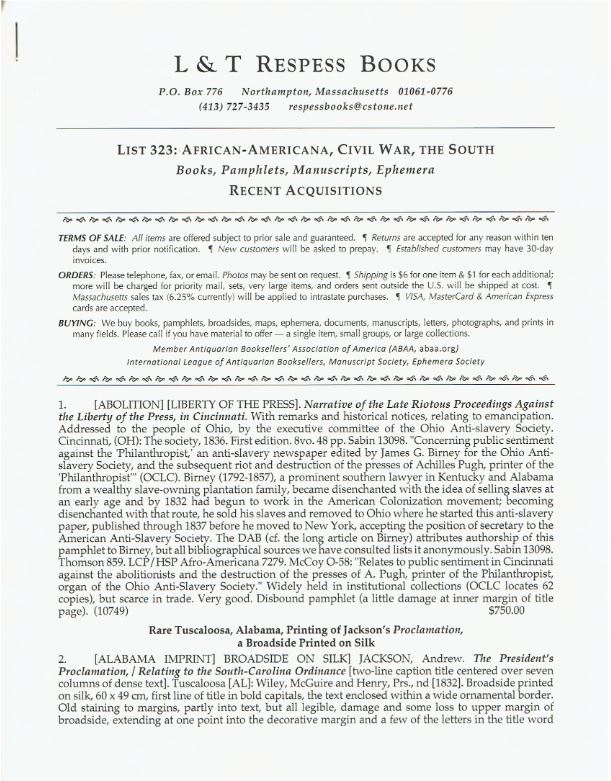 African-Americana, Civil War, and the South.

L & T Respess Books has issued a catalogue of recent acquisitions in the field of African-Americana, Civil War, the South. This is a southern-oriented collection of diverse material. Most of what we find is various types of ephemeral material rather than full-length books. The collection is highly concentrated on the 19th century. We also note a few uncommon items printed on silk. These are a few selections we found within.

We begin with printed lyrics for the song associated more than any other with the South. The title was slightly different from what we call it today – Dixie's Land. This is an undated printing from 1860-1867, the song initially having been published in 1860. It was first used in minstrel shows, and this song sheet is illustrated with two black-face performers. One is standing and singing, the other seated playing the banjo. There are six verses plus the chorus. The lyrics are in dialect, such as the opening line – “I wish I was in de land of cotton.” The song writer was Daniel D. Emmet. Here is a surprising fact about the writer of the song most associated with the South. He was from Ohio and wrote the song while in New York City. Also, “Dixie” was not a common name for the South when he wrote the song. The song gave the South its nickname of “Dixie,” not the other way around. Item 27. Priced at $375.

This next item is not something you would see today, but apparently was not that unreasonable two centuries ago. It is a letter from Brett Randolph, Jr., of Virginia, to William Eustis, “Secretary at War.” Randolph, a Culpepper County farmer, wrote letters to various public officials seeking government positions, based at least partly on his own poverty. I don't know whether he ever succeeded, but he did have a free frank for this 1809 letter. This letter is a plea on behalf of his son, who was seeking a position as a surgeon's mate on board a naval vessel. The father explains that “...not having the means of sending him to attend the Lectures, I am advised to the plan, by his professional friends, as the best that can be done at the present.” Randolph does point out, for experience, that his son has lived with a physician for over two years. Here is what is surprising to one living in the 21st century. The boy was only 16 years old! Seriously, do you want someone 16 years old participating in your surgery? It seems a bit young. This story does have a happy ending. Randolph had a son who was 16 years old in 1809, presumably the same, who became a physician. Item 52. $125.

Then again, maybe becoming a physician wasn't such a good idea. There seems to have been some backbiting in the profession. Item 4 is Transactions of the Little Rock and Pulaski County Medical Association: Defense Against Charges Made Public by Act of the Committee on Publications of the State Medical Association; and in Justification of the Action in the Matter of Controversy between Drs. Lawrence, Hobson, and Brooks, of Hot Springs, published in 1873. Doctors Lawrence and Hobson made charges of “conduct unbecoming of the profession” against their fellow Hot Springs physician, Dr. Brooks. Dr. Lawrence called him a “professional fraud.” For reasons I do not understand, this became a major divisive issue among the state medical association and lasted for several years, splits resulting. The majority supported Dr. Brooks, but around one-third adamantly opposed him. This report contains 60 pages of testimony about the case, and with the majority taking Dr. Brooks' side, the result was favorable to him. They found that the “accused has been the victim of a most unjustifiable persecution, arising from professional jealousy.” Nevertheless, Dr. Brooks was not admitted to the association as he lived outside their boundaries. Later on, two medical organizations formed in Hot Springs, Drs. Lawrence, Hobson, and others in one, Dr. Brooks and others in the other. Item 4. $250.

Item 2 is one of those printed-on-silk broadsides. It was printed in Tuscaloosa, Alabama, but it is of a proclamation by President Andrew Jackson on December 10, 1832, relating to actions taken by the state of South Carolina. This was South Carolina's Nullification Proclamation. The state claimed that it would not allow the enforcement of federal tariffs in South Carolina and would secede from the Union if so forced. A few decades later, South Carolina would pass a secession resolution over a different issue, slavery, and the other states of the South would join in. That came after years of federal compromising over the issue. In this case, President Jackson was not about to compromise, and his no-nonsense response beat back South Carolina officials and stopped other southern states from joining them. Jackson states that “Disunion by armed force is treason. Are you really ready to incur its guilt? If you are, on the heads of the instigators of the act be the dreadful consequences; on their heads be the dishonor, but on yours may fall the punishment.” Jackson was not fooling around, and South Carolina wisely backed down. Nineteenth century printings on silk are rare, particularly of something of historic importance. $7,500.

Next we have 285 pages of manuscript writings that will reveal something of the philosophy of another American president. In this case it is Woodrow Wilson. The three notebooks containing his thoughts were written in 1900-1901 when Wilson was teaching law at Princeton University. The notebooks were kept by one of his students, Hubert F. Fisher, who took Wilson's courses in Jurisprudence, Constitutional Law of the United States, and Politics. These should be revealing of the future President's views a little over a decade before he was elected to the nation's highest office. For example, the notes reveal Wilson explaining “that a common national character can be imparted to a vast and heterogeneous population drawn like our own from almost all the races of the civilized world provided 1st that differences of language be eliminated & conducting media be provided for thought, principle & idea.” This is much the American ideal, except I am not sure whether Wilson was removing some people from access to the American dream by qualifying the eligible races as coming from the “civilized” world. At another point, he questions whether an American style of government is appropriate for China and the Philippines. Fisher quotes or paraphrases him as saying, “It is the question of how far our 'constitutional' government can be suited for these undeveloped races – races that have been stagnant for centuries.” Fisher went on to be an attorney in Memphis, a state legislator, was appointed U. S. Attorney for the Western District of Tennessee in 1914 by his former professor, and was a U. S. Congressman from 1917-1931. Item 57. $2,250.