The Civil War from the George S. MacManus Co. 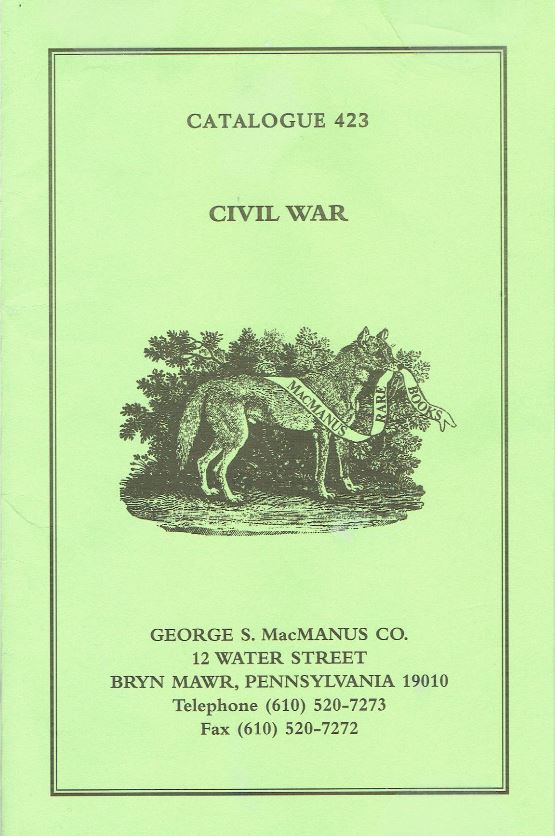 The George S. MacManus Company has released a new catalogue of material related to the Civil War. This internecine conflict is a specialty of MacManus, their collection of books and other printed material on the topic extensive. The 300 books herein offered are not for the most part major histories of the war but are detailed, specialized accounts. Some examples of these are the many regiment biographies and accounts by ordinary foot soldiers in the war. Others come from eyewitnesses who were not active participants, such as Confederate wives who witnessed the fighting around them. Union wives were spared this horror, but still lost husbands and children in tragic numbers. In the end, not much changed other than the slaves became emancipated but segregated, discriminated against, second class citizens often subjected to terror. The Union won, but it has been a long journey for those they freed. Here are a few titles from this collection of Civil War books.

It is kind of odd to begin a description of Civil War accounts with something good and humane, but we already know about the death and destruction the war wrought. It might be even more surprising to hear of good things from a prisoner, Civil War prisons not having a good reputation at all, but here it is: Prison Reminiscences, An Address Read Before Stonewall Camp, Confederate Veterans...February 2nd, 1904. James F. Crocker enlisted in the Virginia Infantry early in the war, was seriously injured in the Battle of Malvern Hill, but recovered to participate in Pickett's Charge during the Battle of Gettysburg. He was wounded again and left on the battlefield by retreating Confederates. He was captured and taken prisoner. However, for some reason he did not quite understand, the Union soldiers trusted him. Needing new clothes, he was allowed to travel to Gettysburg alone. He found himself mingling with northerners, being warmly treated by them. He wrote, “It was a queer episode – a peace episode in the midst the war. This experience of mine taught me that the hates and prejudices engendered by the war were national, not individual; that individual relations and feelings were but little affected in reality; and that personal contact was sufficient to restore kindliness and friendship.” Item 156. Priced at $1,750.

Here is an account of another Confederate's time in a Union prison. He didn't enjoy it as much, though it certainly could have been worse, considering his role. He was the President of the Confederate States of America. The book is Prison Life of Jefferson Davis. Embracing Details and Incidents in His Captivity, Particulars Concerning His Health and Habits, Together with many Conversations on Topics of Great Public Interest. The author was John J. Craven, his attending physician at Fortress Monroe. It was published in 1866. His early treatment was not good, no visitors, no books other than the Bible. His health deteriorated at first. However, he was given better quarters after a few months and then was transferred to a prison where he lived with his family in superior quarters. After two years, he was released on bail, the funds being provided by, among others, Gerrit Smith. Smith was undoubtedly the only person who ever raised funds for both Jefferson Davis and John Brown. Despite talk of a charge of treason, Davis was never charged with anything, but instead received a pardon. Item 151. $175.

Perhaps this is the perfect book of advice for Confederate soldiers. The title is Napoleon's Maxims of War. This is the first Confederate edition published in 1862. It was translated by Col. D'Aguilar since most Confederate soldiers not from Louisiana did not speak French. Napoleon had much in common with his Confederate counterparts - tough, determined, militarily smart, but he lost anyway. Ironically, the book bears a recommendation from General Winfield Scott, who led the Union army early in the war. Item 50. $1,500.

Here is a bound volume of sheet music for songs you probably don't know. There are 44 songs, and these are songs of the South. They are Confederate songs. They are from 1863-1864, and things weren't going so well for their side by then, perhaps explaining some of the unhappy titles. Among the songs you can learn are The Dying Soldier, Dear Mother I've Come Home to Die, God Save the South, No Surrender Song, Keep Me Awake Mother, Her Bright Smile Haunts Me Still, Mother Is the Battle Over, When This Cruel War is Over, Who Will Care for Mother Now, and Pray, Maiden, Pray! This does not sound like much of a collection of party songs. Item 103. $12,000.

However bad soldiers from the other side may have seemed, most were probably decent people, such as those James Crocker encountered in Gettysburg. However, in the border areas there were irregular fighters and these were not such nice people. The Confederate side in Missouri produced several of these, men upset with the Union for some reason or other seeking revenge. The reality was that in the border territories, it could be neighbor against neighbor, and that can get really ugly. Item 233 is Noted Guerrillas, or the Warfare of the Border. It describes veterans of Quantrill's Raiders, spreaders of mayhem in Missouri and Kansas. They included William Quantrill, Jesse and Frank James, Cole Younger and his brothers, Bloody Bill Anderson, and other disreputable characters. $250.