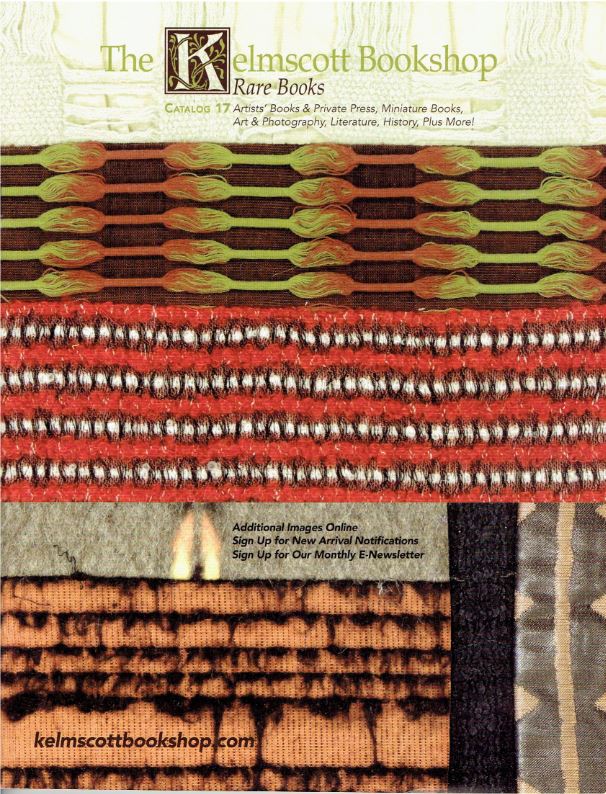 Catalog 17 from the Kelmscott Bookshop.

The Kelmscott Bookshop has issued their Catalog 17, or long title, Artists' Books & Private Press, Miniature Books, Art & Photography, Literature, History, Plus More! The first section, Artists' Books & Private Press, consists of just over half of the selections. Don't look for antiquarian books here. Everything is late 20th to 21st century, as recently as 2019, with one exception from the 19th century. In the rest of the catalogue, anything goes. There is much from old times here and the subjects are as varied as “plus more” suggests. Whatever your interests, they might be here. These are a few selections from this catalogue.

We begin with a private press from Santa Cruz, California, and a very recent book, dated 2019 to be specific. However, the book was not written recently. It is a travel classic, more fiction than fact. Item 22 is The Travels of Sir John Mandeville Beyond the Holy Land. The publisher is the Foolscap Press and they do their own designing, printing, and binding. The author of this book is unknown, it first having appeared in manuscript form long before Gutenberg invented printing with movable type. The illustrator and illuminator is Peggy Gothold, partner in the press. This edition features her hand applied illuminations and five double-page maps on hand-made linen paper. This is copy #21 of only 90 produced. Mandeville was a supposed traveler to the East in the days before Europeans knew much if anything about Asia. About the only source available at that time was what Marco Polo had brought back. However, it is doubtful that there was a John Mandeville, it likely being the author created his adventures from what limited information there was available plus his imagination. Priced at $1,500.

We mentioned there was one 19th century private press work in the catalogue. Here it is. This is not an entire book. It is a leaf. You know you have it made when collectors are happy if they can have just a single leaf from your book. Then again, this is the most famous of the private presses, and the leaf is from the most notable of all the books they printed. Item 68 is a leaf from The Works of Geoffrey Chaucer, better known as the Kelmscott Chaucer, with the publisher being the Kelmscott Press. William Morris' Kelmscott Press published only during the 1890s, its run cut short by Morris' death, but it started the private press movement as we know it today. This leaf comes from the first page of text for The House of Fame Liber Tercius. This page features one of the magnificent wood engravings from Edward Burne-Jones. It shows the poet wandering through the ice, the blocks inscribed with the names of famous people, but thawing has made some of the letters unreadable. Fame is fleeting. $1,600.

For book collectors with a limited amount of space, what could be better than a collection of miniature books? This one won't take up too much room. It has 94 pages, but the dimensions are only 2.25” x 1.5”. You may need to bring a magnifying glass. Item 78 is the Old Testament in miniature, but it is not an ordinary copy. This is one in a “treasure binding” or “jeweled binding.” These bindings were popular in the Middle Ages, often commissioned by wealthy nobility, royalty, or important clergy. The covers would be encrusted with jewels, precious metals, or other objects of value. This edition was created by miniature book specialist Bo Press in 2018. Few of the ancient jeweled books have survived because people often separated the jewels from the bindings along the way. To avoid this problem, and make the book affordable to less-than nobility and royalty, Bo Press has brass and glass beads in place of the gems and gold. It presents the same beauty but can still be put on display, not locked away in a safe. $220.

I'm not sure how many people buy large “collected works” editions to actually read them, versus put them on display. This is an impressive set, but if you are a reader, you will need to set some time aside. Item 114 is The Works of William Makepeace Thackeray with Biographical Introductions by His Daughter, Anne Ritchie. Thackeray was quite popular in the 19th century, so much so that he was able to write enough material to fill this 25-volume set. Likely his most famous work is Vanity Fair. Thackeray is not as popular today as he once was, but not many from his time are. This set was published in 1900 and features three-quarter turquoise morocco bindings. It will look fine on a shelf while providing lots of reading to fill your spare time. $2,000

Speaking of Mr. Thackeray and his daughter, here she is, a photograph, a mounted albumen print. It was taken in 1870, when she was 48 years old. That was seven years after her father died. Anne Thackeray is seated in a ruffled dress, turned mostly to the side, not looking at the camera. The photographer was Julia Margaret Cameron. Ms. Cameron did not take up photography until the age of 48, but became one of the most important portrait photographers of Britain during her time. She photographed many of the leading figures of the age. Item 92. $7,500.